What makes Dash a superhero? 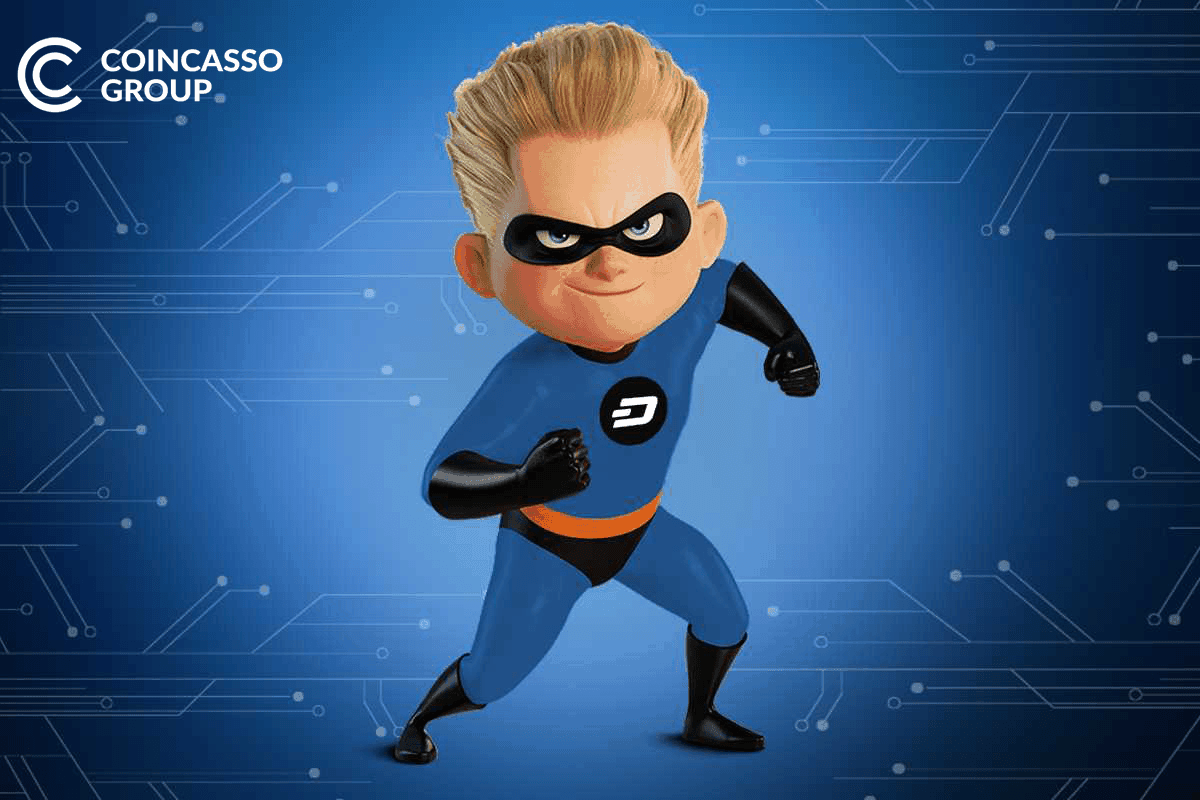 We are back with our weekly cryptocurrency reviews! Recently, we informed about new cryptocurrencies on CoinCasso Exchange, one of them is Dash. What does this cryptocurrency is characterized by? Why is it worth investing in it? What innovations does it bring? Let’s take a look!

Dash, called Digital Cash or “a new PayPal”, is a peer-to-peer cryptocurrency focused on the payment industry, based on open source code. The Dash project is based on similar assumptions as Bitcoin, but with more extensive functionality. Cryptocurrency offers an instant payment system – InstantSend and private transactions system – PrivateSend. Dash is also one of the first decentralized and autonomous organizations (DAO).

Dash is currently ranked in top 20 at the market capitalization ranking.  For a long time, it has been in top 10 – almost since its launch in 2014. Dash possessed the best price in relation to Bitcoin in the first quarter of 2017. Later, its price began to “diverge” from the “crypto king” but as most cryptocurrencies, its absolute price reached an all-time high in January 2018, when Dash price hit over 1500 USD! Then, it decreased about five times (to about 300 USD) until April 2018, and then again lowered to about 150 USD in July. Recently, Dash price is still falling – at the end of December it reached about 80 USD, and at the time when we publish this article (7th February 2019) Dash price is close to its all-time low. Will it rise up from the ashes?

The long-term investment perspectives of Dash according to analysts are very optimistic. Smartereum.com states brave thesis – in their opinion Dash price is going to reach 5000 USD in the next 5 years! They also think that the price should skyrocket already in 2019. More and more consumers want to start using Dash for everyday use due to greater privacy and faster transaction times, and many other users have already switched to Dash, which means that Dash prices can easily jump.

Is buying Dash when it falls – not when it grows – a good idea? It seems so, as it is definitely a unique project. Patience is important because Dash is not necessarily a good short-term investment, but in a few years, it should bring real profits to its investors.

Dash was originally created by Evan Duffield in January 2014 as “XCoin”. It is Bitcoin’s fork. Evan Duffield is a 39-year-old entrepreneur and software developer. Just a few days after the launch of XCoin (XCO), about 2 million coins had been mined. This number was about 10% of the total supply of XCoin. The issue appeared as a result of a problem with the Litecoin source code from which XCoin was forked. It was resolved later, and the project was able to shake off this initial mistake. Today, the circulating supply of Dash is equal to 8 617 166 DASH.

Shortly after the start, Duffield resigned from the name XCoin and until March 2015, this cryptocurrency was called Darkcoin. Then, Darkcoin finally changed its name and began to become recognizable as Dash.

How is #Dash different? What is @Dashpay‘s long-term vision & how is it different to other #cryptocurrencies? $Dash is on a mission to be the PayPal of #cryptocurrency focusing on improving user experience & taking #crypto payments mainstream. pic.twitter.com/uALmg1D4xD

In the whitepaper, Dash was described as a first privacy-centric cryptographic currency based on Nakamoto’s work. Dash can be used to make instant private payments online or in-store using secure open source platform hosted by thousands of users around the world. Dash aims at simplifying Bitcoin’s features – instead of using a complicated address, you get only username in Dash’s network.

The Dash project is based on masternodes. It is the system of privileged nodes responsible for advanced system functions. The masternode protection is 1000 DASH, which means that at a price of DASH of 100$, in order to be able to run a masternod node, you need to have $100,000. Masternodes play an important role in voting on the changes and development of the DASH project.

Not a typical halving

Like Bitcoin, Dash takes advantage of Proof-of-Work consensus mechanism. The X11 algorithm is used for mining. It is a combination of 11 different hash functions, and therefore, it is very secure, as the potential hackers would have to solve 11 different problems. Going further, X11 absorbs about half as much energy as another popular algorithm, Scrypt.

When it comes to the details of mining, after solving the task and digging a new block, the miner receives a prize in the form of DASH coins. The prize for the dug block is divided among: miners who receive 45% and so-called masternodes in which hands also goes 45% of the prize, the remaining 10% is spent on the development of the project.  Unlike in Bitcoin, the prize (in this context a halving) decreases by 7% every year. Dash’s blocktime is equal to 2min 40 sec.

This service is provided by the masternode nodes, which mix Dash coins, increasing the anonymity of both parties to the transaction. As with traditional currencies, it is difficult to track individual coins, so in the case of PrivateSend, it is almost impossible to indicate the source from which Dash coins were sent. This service is limited to 1000 Dash values and requires several sessions to ensure that the anonymisation process has been completed correctly.

This is another unique Dash feature. The masternode network enables immediate and irreversible transactions between users. The whole process takes up to several seconds and costs fractions of the dollar.

To sum up, Dash is used primarily for instant transactions all over the world. It possesses unique features in comparison to Bitcoin and overall, this project definitely has a lot potential. Are you going to invest in this Bitcoin’s fork? Let us recall once again that Dash is going to be listed on CoinCasso exchange. If you do so, we wish you all the best with your investment!