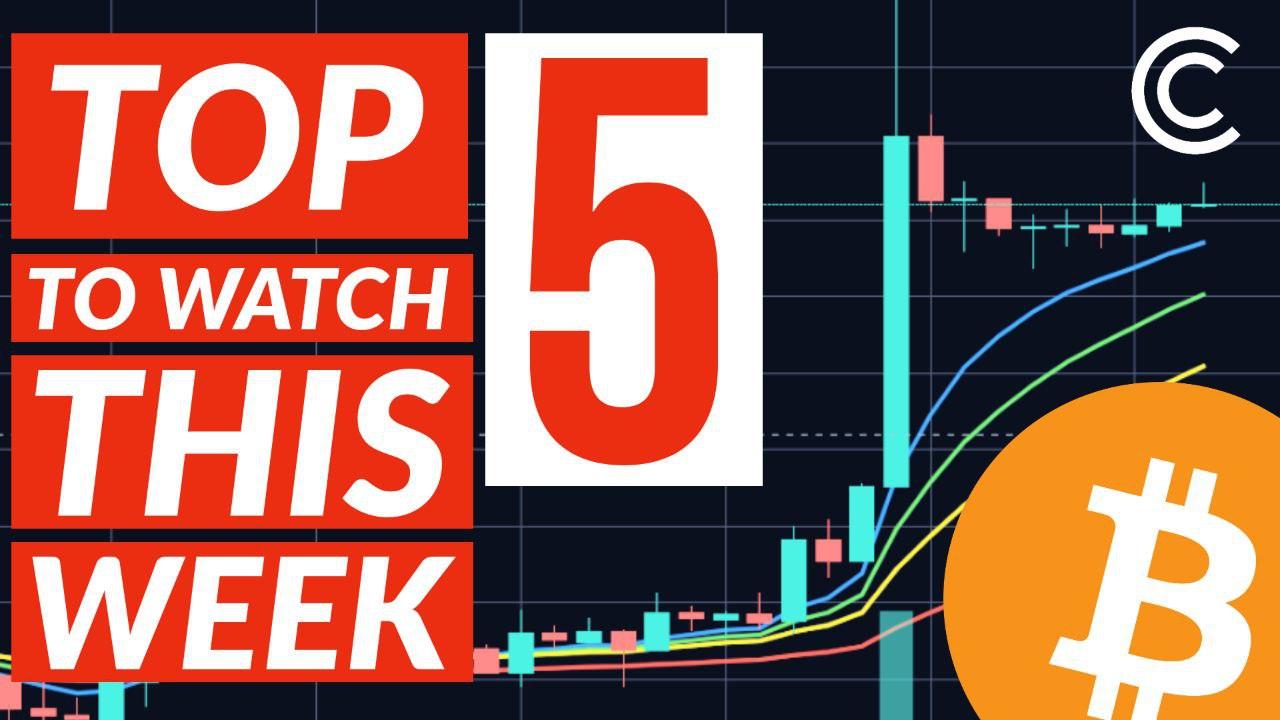 In today’s article we talk about how Italy is actually ready to test the digital Euro. We also discuss the growing popularity of xrp in Japan and a new segment that I want to add in on Mondays the top five cryptocurrencies to watch for this week. We also go over the current prices of the top cryptocurrencies as well as a brief analysis on bitcoin to see if we can predict the future. So sit back, relax and enjoy the show.

As always this publication is sponsored by CoinCasso cryptocurrency exchange. So if you’re unsatisfied with your crypto currency exchange, like Coinbase that crashes every single time that the price drops or goes up, consider checking out CoinCasso in the link, and the first 500 users to sign up get 10 USDT for free after the KYC.

Now this is where my Bitcoin analysis segment usually goes. But Bitcoin has been trading sideways for the past week with very low volume. All indicators show that it’s going to continue to move sideways unless we get some publicity in the Market or some whales get in and out, the price should continue to trade sideways for the next few days. Plus you guys don’t want me talking about the RSI in the MACD, or the moving averages, because it’s still just trading sideways. It’s not going to make a difference.

Italian Banks Are Ready to Trial a Digital Euro

The Italian Banking Association (ABI) announced Thursday that its banks are willing to pilot a digital euro.

ABI, made up of over 700 Italian banking institutions, expressed its desire to help speed up the implementation of a digital currency backed by the European Central Bank (ECB) by participating in related projects and experiments. Last year, ABI set up a working group to research digital and crypto assets.

The group shared 10 considerations for a digital euro in Thursday’s announcement, starting with, “Monetary stability and full compliance with the European regulatory framework must be preserved as a matter of priority.”

The group prioritized the need for a digital currency framework to be fully compliant with EU regulations to win the public’s trust, and said banks will play a critical role in upholding that trust.

In its second guideline, the group said Italian banks are already working with distributed ledger technology, referencing the Spunta project. The project was an initiative by the ABI Lab to integrate blockchain to speed up the processing of interbank settlements.

According to the group, a central bank digital currency (CBDC) would lead to future innovations to the traditional banking system like P2P transactions, machine-to-machine transactions and the ability to manage exchange rate and interest rate risk thanks to the programmable capabilities of digital currencies.

“A programmable digital currency represents an innovation in the financial field capable of profoundly revolutionizing money and exchange. This is a transformation capable of bringing significant potential added value, particularly in terms of the efficiency of the operating and management processes,” the announcement said.

Italy is not the first nation to express an interest in experimenting with a digital euro. Earlier this year, France’s central bank sent out a call for proposals for CBDC experiments. The Dutch Central Bank also announced the Netherlands was willing to trial a digital euro.

Last year, the head of Germany’s Central Bank Jens Weidmann, in a speech, warned that a CBDC could destabilize financial systems. Later in the year, the Association of German Banks made an announcement advocating for a programmable digital euro.

The Italian Central Bank has yet to comment on ABI’s announcement.

This is literally showing the timeline of the human mentality. At first something is no, no, no, because it’s scary and new and they don’t think that’ll work. But the more the blockchain is utilized in different companies and dapps and all of these different things that it can do with smart contracts. The more people realize how efficient it would be to actually digitize all Fiat currencies and make transactions seamless and faster overall.

I think in the next five years almost every single country will be actually doing a pilot program of their digital currency because this process is going to take a very long time to actually digitized a fiat currency and actually make sure that it doesn’t in fact destabilize their currency.

Can XRP Reclaim the Throne in Japan? BitBank Analyzes the Latest Data 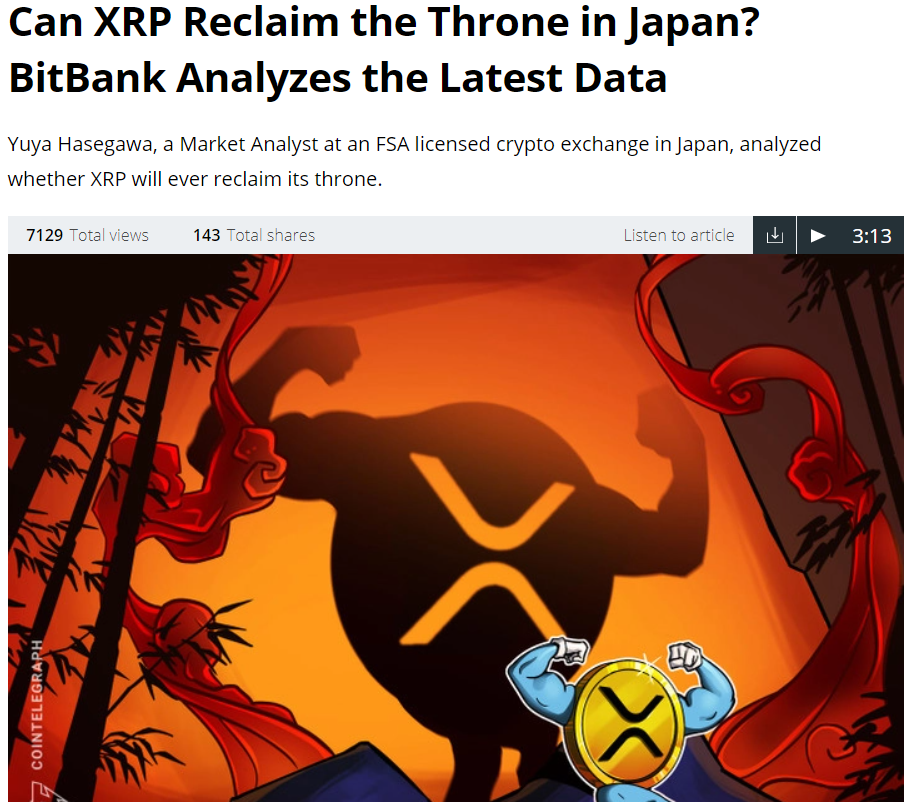 Japanese crypto investors have been known for their passionate support of XRP. Indeed, at one point in Japan, XRP was more popular than Bitcoin. Yet, the official data from the Japan Virtual and Crypto Assets Exchange Association, or JVCEA, the self-regulatory organization approved by the Financial Services Agency, or FSA, shows that XRP is losing its charm in Japan.

We already saw the “XRP army” shrink in the English speaking region. As XRP’s price stagnation continues, the same thing is happening in the Japanese market.

This article does dive into the fact that xrp is better for transactions because not many people transact day-to-day with Bitcoin. XRP However, does have a large transaction volume every single day. That’s why they think that it’s going to start out performing Bitcoin in the near future in Japan 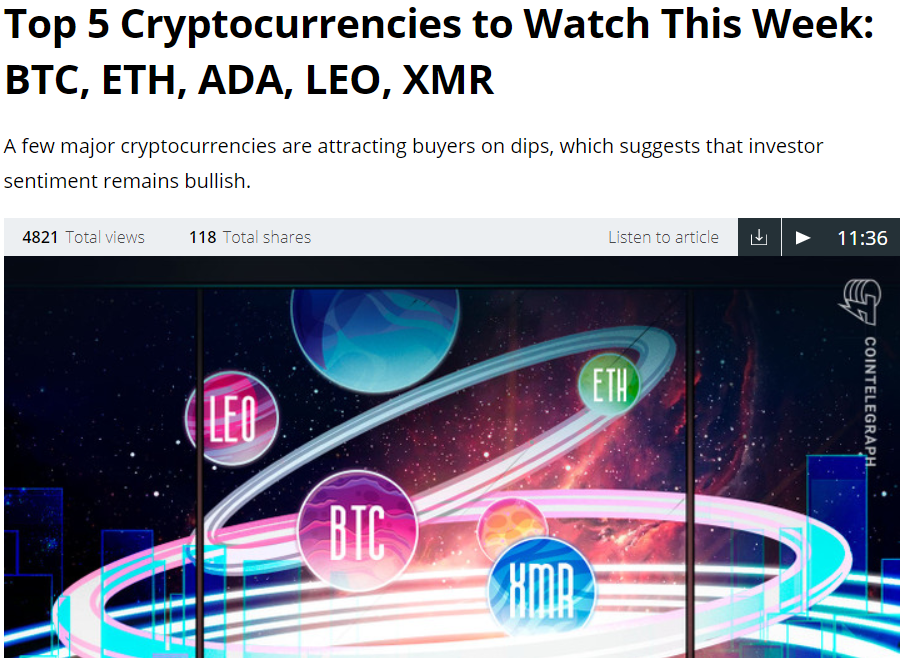 BTC/USD
Bitcoin (BTC) dipped below $9,078.96 on June 15 but the bears could not capitalize on this weakness as bulls provided support at $8,910.04. This suggests strong demand at lower levels. However, the rebound has not been able to sustain above the 10-day exponential moving average ($9,425), suggesting selling at higher levels.

So this is the range that we’re playing in right now below 9,500 above 8900. So if you’re day trading that’s going to be your range

If the bulls can scale the price above $253.556, the uptrend is likely to resume. However, if the price turns down from this resistance, the range-bound action is likely to extend for a few more days.

Conversely, if the biggest altcoin continues lower from the current levels, it can drop to $217.67. The bulls are likely to defend this level aggressively. A strong bounce off this level will indicate that the bulls are keen to accumulate at lower levels. A break below $217.67 will tilt the advantage in favor of the bears.

Again, all cryptocurrencies have been trading sideways and it is a little bit frustrating for those that want to capitalize on their profits.

ADA/USD
The dip in Cardano (ADA) to $0.069488 was purchased aggressively on June 15. This is a positive sign as it shows that several traders expect the trend to continue, hence, they are buying the dips.

The 10-day EMA ($0.080) has flattened out and the RSI is just above the 50 level, which suggests that the bulls might be tiring out in the short-term. However, as the 50-day SMA ($0.065) is still sloping higher, the medium-trend remains bullish.

Alternatively, if the 11th-ranked cryptocurrency on CoinMarketCap turns down from the downtrend line and breaks below $0.075, it will signal weakness. If that happens, the decline is likely to extend to $0.0694880 and then to the 50-day SMA.

So again, if you’re day trading that’s going to be your range the 10 and 50 day moving averages it is Bouncing between those two very well.

LEO/USD
Unus Sed Leo (LEO) had been in a strong uptrend for the past few months. The strong rally had pushed the RSI deep into the overbought territory a few days ago, which suggested that traders were piling on due to fear of missing out on the rally.

The 15th-ranked cryptocurrency on CoinMarketCap turned down and succumbed to profit booking between June 13–16. However, a positive is that the bulls purchased the dip below the 50-day SMA ($1.149).

This suggests that the sentiment is to buy the dips but the bears are not willing to give up without a fight. They are aggressively defending the 10-day EMA ($1.175).

If the price turns down from the 10-day EMA, the bears will attempt to sink the price below $1.12. If successful, a deeper correction to $1.05 is possible.

Conversely, if the bulls can push the price above the 10-day EMA, a retest of the recent highs at $1.26 is possible.

XMR/USD
Monero (XMR) has been forming an ascending triangle pattern for the past few weeks that will complete on a breakout and close (UTC time) above the $68.4175– $70.0979 resistance zone. The pattern target of a breakout of the triangle is $82.7887.

Currently, the bulls are attempting to defend the trendline support of the triangle, which is a positive sign. If the 16th-ranked cryptocurrency on CoinMarketCap rises above the 10-day EMA ($65), the bulls will make another attempt to carry the price to the overhead resistance zone.

This bullish view will be invalidated if the altcoin turns down from the 10-day EMA and breaks below the trendline. A break below the $62–$60 support is likely to intensify selling resulting in a possible drop to $54.0463.

So if you’re looking for an opportunity to maybe capitalize on some cash, do some research on Monaro and see if you can get this Spike from the price right now up to eighty two dollars.