The bounty program – in other words, feel like in the Wild West! | CoinCasso Exchange

The bounty program – in other words, feel like in the Wild West! 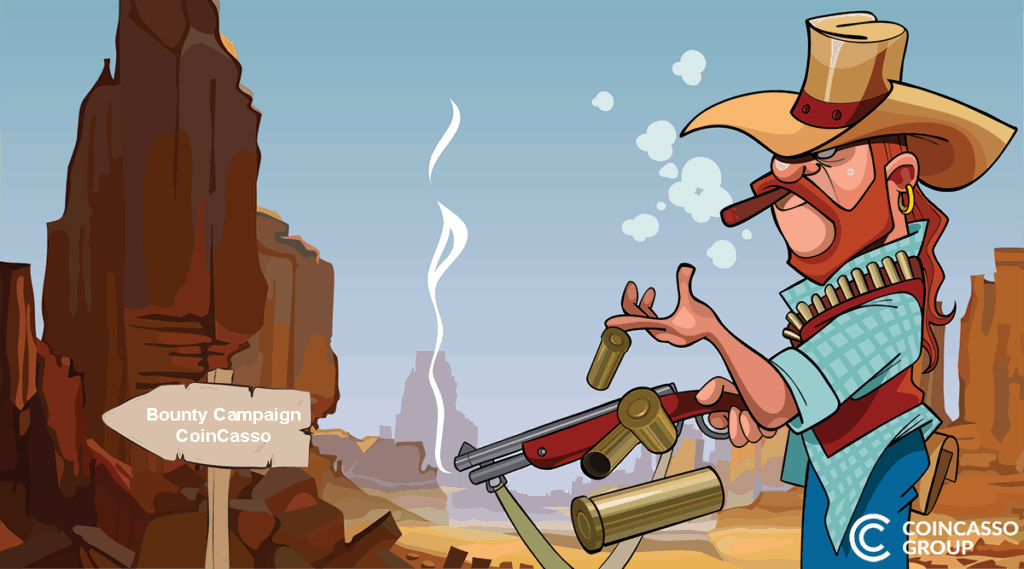 As we informed yesterday on our Facebook fanpage, CoinCasso team met in Davos with a world-reowned business leader, Prof. Mark Mueller-Eberstein to discuss bounty programs in the cryptocurrency world. In order to increase the marketing coverage of our project’s campaign, create the initial transaction liquidity and test the platform we are going to implement a bounty program. It means that we will reward users who make a marketing campaign for our project!

Specific details of our bounty campaign are yet to be released. For those of you, who don’t know what a bounty program is, and for those who want to systematize their knowledge, we prepared a brief introduction to bounties in the cryptocurrency world.

A person who is promoting the offering to audiences and investors during ICO is called a bounty hunter. Usually, the reward (bounty) is contributed between these bounty hunters via distributing ICO tokens. Later, these tokens can be redeemed into traditional, FIAT currencies after the token starts being listed on a cryptocurrency exchange platform.

Therefore, a bounty program gives you the opportunity to receive free tokens without buying them during ICO, and thanks to completing specific tasks and jobs created by blockchain companies.

Remember that usually not every user can become a promoter. Usually, the requirement is the appropriate popularity in social media and being perceived as a trusted, influential person.

There are different types of bounties, some of them are the following:

You can receive free tokens via helping blockchain companies translate their whitepaper or website to another language.

Blockchain companies are looking for all types of authors. These include technical writing and writing whitepaper. This type of crypto-awards is a bit rarer, but still, you can find it.

If you have knowledge about programming and you would like to become a crypto software tester, this type of bounty may be for you. It involves finding bugs in blockchain applications.

Sometimes bug bounties are organized for teams – you can call it a race in which the team of programmers who finds the most bugs wins. Well-known projects offering this type of bounty are Ethereum and the world’s leading cryptocurrency exchange Binance.

Signature bounties are the highest type of premium bonuses in the cryptocurrency space. The only way to qualify for this kind of prizes is an active social presence in the forums. You will have to put the company logo and links to your signature.

How much money you can make on a bounty program?

Most of the time, the amount you can earn depends on you. However, usually, companies will have a certain number of tokens that will reward people who take part in the prizes.

To conclude, enrolling into a bounty program is a better alternative than buying a token by ICO before selling because you get free tokens for a little bit of effort!

We have more meetings in Davos ahead of us. Today there will be an extraordinary event – a meeting called “Private Investors Dinner”, of which CoinCasso is an organizer and general sponsor! We will present our innovative blockchain solutions to the investors.

To keep up to date with the latest news about our company, remember to follow us on social media channels! And as always, remember – the blockchain revolution has just begun!