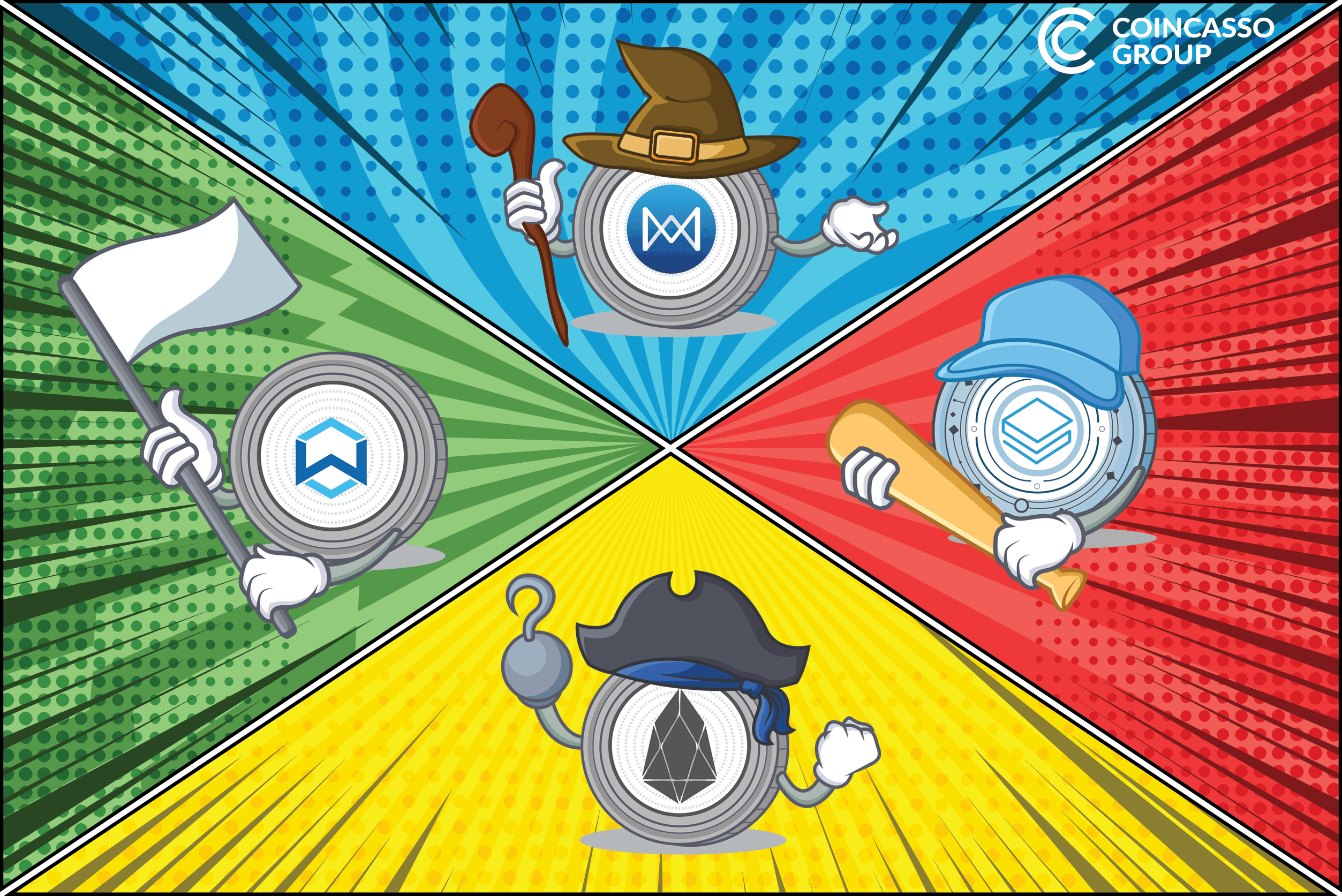 Welcome to the second part of our blockchain overview! This time we will discuss less known blockchains – Stratis, Wanchain, Quarkchain, and only one more “mainstream” – EOS, which is listed in top 5 at market capitalization ranking at the time when we publish this article. In case you missed it, we strongly encourage you to read blockchain compare part 1 and meet our Fantastic Four. Have you already read it and you are ready for part 2? Let’s go!

Stratis is based on Bitcoin consensus algorithm, and therefore, it differs much from Ethereum. One of the main advantages of Stratis over Ethereum is using C# and .NET platform, instead of Solidity language, which is not well-known by developers. On Stratis blockchain, Smart Contracts run on sidechains or linked chains only. However, Stratis is more focused on innovative solutions that blockchain technology brings rather than on Smart Contracts.

Stratis is one of the most reliable and secure crypto tokens today. It was designed to aim at needs of real-world financial services. Stratis uses Proof-of-Stake algorithm and mining is there way easier than on Ethereum blockchain.

Stratis was launched in April, 2016. Its ICO raised about $600,000. Stratis blocktime is equal to 60 seconds. It is currently ranked in top 50 at market capitalization ranking.

As Stratis, Wanchain (WAN) has been designed for needs of the financial services, mostly thanks to providing Smart Contracts and cross-chain transactions. Wainchain’s founders claim its interoperability as one of its key features. It connects different networks together in order to exchange value.

Wanchain is interoperable with Ethereum platform, and its new version Wanchain 3.0, is going to be integrable also with the Bitcoin network.

As Ethereum, Wanchain supports Solidity language. It uses Proof-of-Stake consensus algorithm. Its ICO – in October 2017 – raised as much as over $35 million. Its offices are located in Beijing, China and in Austin, Texas (USA).

According to whitepaper, Quarkchain is a “high-capacity peer-to-peer transactional system” and “new scalable blockchain”. Its token is ERC20-type and is called QKC. It is based on Ethereum platform. Quarkchain’s circulating supply is currently equal to 801 649 919, and the total volume is equal to as much as 10 billion tokens. However, only 20% of them are available for purchase.

The key features of Quarkchain are security, scalability, and the support of fragmentation. Quarkchain consists of two layers, and applies elastic sharding blockchains on the first layer. The second layer is called a root layer, which confirms the blocks from the shards. The root chain uses Proof-of-Work consensus algorithm.

The EOS core is about to support decentralized apps, with an aim for developers to be an easy way to create such applications. It is predicted to become the first operating system for enterprise applications in the western countries. The key features of EOS are scalability and interoperability. It is supposed to compete with large projects such as Ethereum and NEO.

EOS was launched in June 2018 by block.one company. However, its test version was presented earlier, in July 2017. This Smart Contract platform is characterised by millions of transactions per second and is focused on the elimination of transaction fees.

We put EOS in our top 5 predictions of most attractive crypto investments for 2019.

How did you like our blockchain overview part 1 and part 2?
At the end, we prepared the tables with compare blockchain technology like Ethereum, Qtum, Waves, NEO, Stratis, Wanchain, Quarkchain and EOS:

Remember that presented blockchains are still a tip of the iceberg in a cryptocurrency world which is full of different technologies. In this 2-part series, we presented those which we found the most interesting, but it’s not the end. Check out our next articles related to blockchain technology!