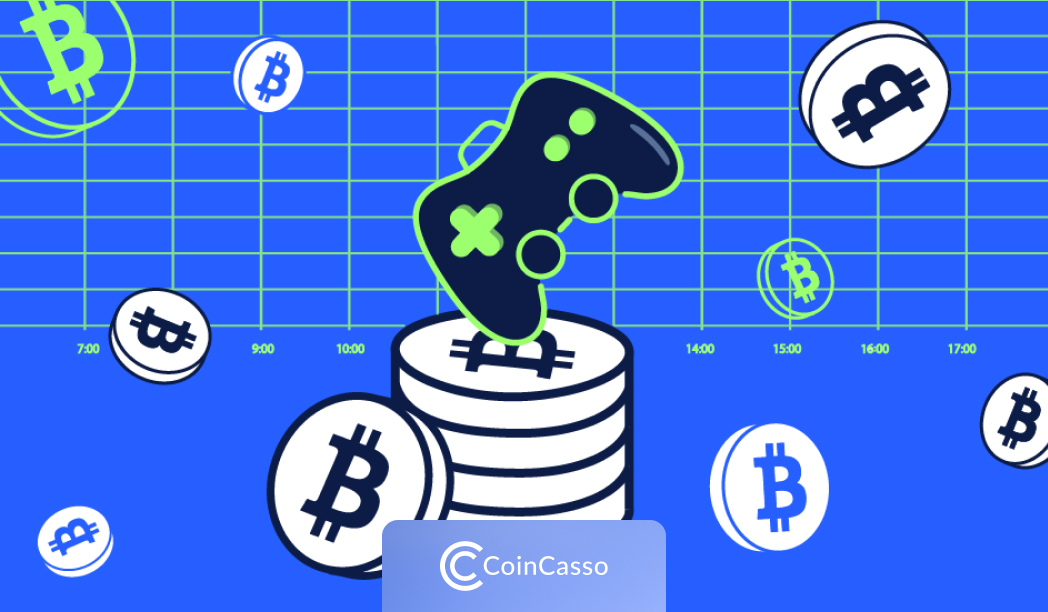 The GameFi phenomenon is relatively new and revolutionary but it’s steadily taking over the world. The play-to-earn (P2E) model was introduced only in 2018 in GameFi – Axie Infinity. In today’s blog post, we will talk all about the blockchain games – how they work, why were they created, and why they’re growing in popularity.

The first blockchain game that gained wide recognition was CryptoKitties. It’s an Ethereum blockchain-based game that started the NFT gaming revolution back in 2017. Have you ever heard about it? Don’t worry if you haven’t. During the past 4 years, hundreds of new GameFi projects came to life bringing in brand-new and even unexpected gaming experiences and possibilities to make money.

The term GameFi is the combination of two words: game and DeFi – decentralized finance. The fusion has happened not only on the lexical level but on the gaming level as well. Blockchain games bring to the table a unique gaming ecosystem with a play-to-earn model. It means that game players can make money and earn passive income just by playing video games.

GameFi offers a whole bunch of economic incentives (mainly digital assets) like tokens or NFTs (non-fungible tokens) and in-game rewards. Player receives bonuses for battling each other or passing levels. With most GameFi projects, one can trade their NFT rewards on NFT marketplaces. However, some games only have bonuses with no value that are purely for visual effects. These can be cosmetics, avatars, skins, etc.

Just like traditional games, blockchain games follow different scenarios. Some projects revolve around breeding and battling digital creatures while others focus mostly on developing your own piece of virtual land for example. Some GameFi even present DeFi features so that users can make use of yield farming, liquidity, and staking.

The fundamental difference between a play-to-earn game and a regular video game lies in generating money and passive income in the real world. Traditional game players do receive rewards but cannot trade them anywhere else except for their gaming space. A play-to-earn model suggests that players can monetize their in-game assets and tokens (usually cryptocurrencies and NFTs) – buy, sell, trade, and exchange them on the NFT market.

The next difference deals with user control. The DeFi element in blockchain games means that players actually decide how the GameFi will be changing and progressing. Play-to-earn games are not owned or created by any game studios. That is why no company can close the project or introduce thew own changes, etc. Indeed, the creators of the blockchain game – game developers are the ones in charge.

The success of the GameFi, to a great extent, depends on how the players will react to it. No wonder most of the chain games have so-called voting tokens. The more voting tokens – the more power a user has on future game development. Through token voting, players share their views and express their opinions on what can be added or modified, such as the next levels, new digital creatures, features, etc. All in all, just like crypto coins, play-to-earn games are decentralized because they’re run on the blockchain. Blockchain-based games are not controlled by one organization, unlike traditional video games.

Best GameFi projects to play in 2022

We will now talk about top play-to-earn games and try to understand why these game assets are in high demand.

One of the first blockchain games, it is similar to Pokemons. Players raise their digital pets – Axies and battle against each other. Each Axie has only 6 body parts, but, in general, there are more than 500 options to choose from. In its turn, every body part has three different genes (minor recessive, recessive, and dominant). Thus, different body parts and the strength of the genes make various combinations of power. The goal is to breed a powerful Axie and win as many battles as possible. Players can earn money throughout the game for breeding and fighting.

One more GameFi written on the Ethereum blockchain, Sandbox provides access to the whole metaverse of unique gaming experiences. There are three underlying products integrated into one ecosystem that takes gaming to a whole new level.

A tool for modeling and animating non-fungible tokens that can be later sold or incorporated into the game.

A special Sandbox market to sell and buy digital assets created in VoxEdit.

A free tool for creating 3D games with no coding skills or experience.

Sandbox has a few different tokens and user categories to manage the whole ecosystem smoothly and effortlessly. The SAND token is the most important one and is used for the majority of transactions. LAND is a digital piece of land that can be developed and personalized by players. ASSETS are the tokens created in VoxEdit that can be sold on the marketplace or used within the Game Maker.

This GameFi is all about weapons and fighting. Players develop their characters and weapons to defeat enemies. They can also sell and trade their equipment and avatars in an open market. As the users progress through the levels, their weapons and characters also develop. What’s more. Cryptoblades is run on Binance Smart Chain as has its native currency – SKILL token. Users need to have cryptocurrency wallets that support both SKILL and BNB tokens. The more advanced and powerful character – the more SKILL tokens a player receives for completing tasks.

GameFi creates a one-of-a-kind gaming experience where both virtual and real worlds merge together. On the one hand, blockchain games function and look like traditional video games. On the other hand, you can make real money while developing your characters/digital creatures and battling against other players. If you’re curious to test your gaming skills and generate passive income, GameFi is definitely worth looking into. However, you should always be careful with the choice of game to avoid fraudsters and scammers.