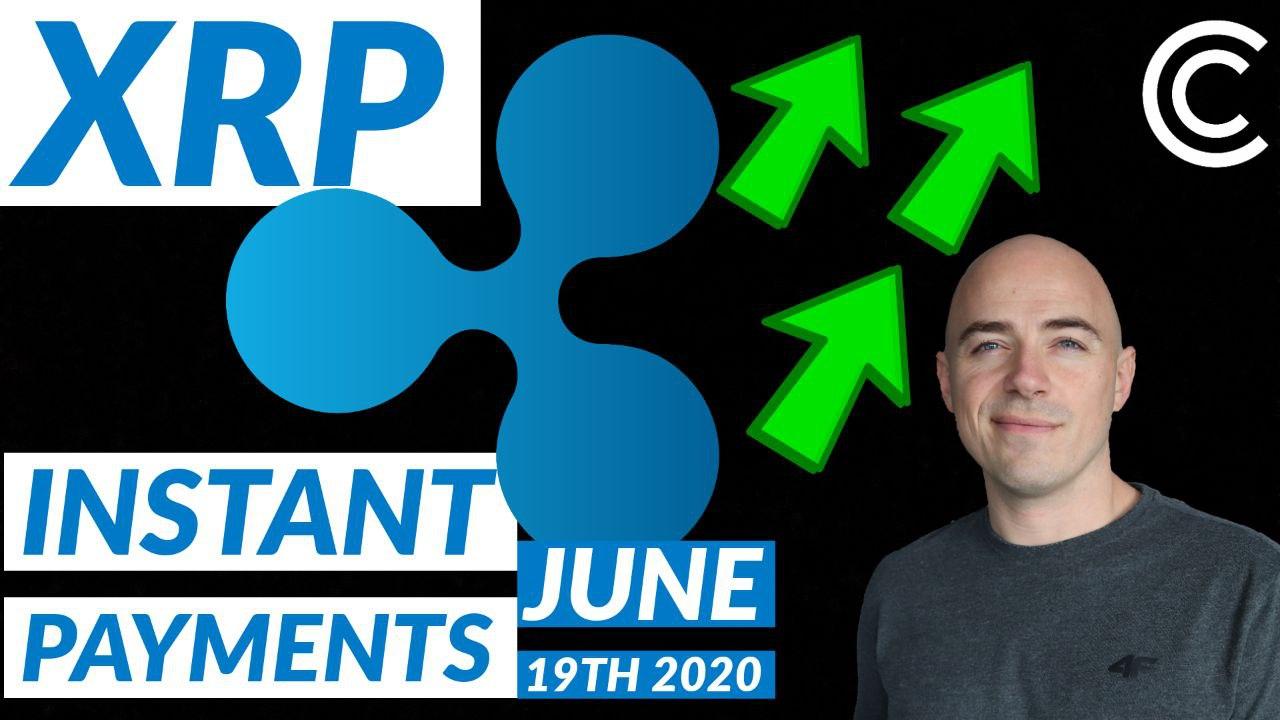 In today’s article, we talk about how researchers refute the blackmail theory on the ethereum transaction. We also talk about altcoins joining the instant global payment Network and Australia’s DeFi. Boom. We also run over the current top cryptocurrency prices as well as a short analysis on bitcoin to see where it’s going in the future.

Now I really enjoy doing my analysis on bitcoin using Trading View. But over the last five days, it’s been trading sideways. So there’s not much to go off using all the trading indicators available on Trading View, but let’s take a quick look at it.

As you can see here since June 11th. We saw that big drop off then it regained 50% of its loss than another big drop off on June 14th, and actually got a new hire high as well as a higher low, but then again it failed to get a higher high.

So it dropped back down and is still trading around this $9,300 – $9,400 mark. This is the definition of trading sideways. The MACD the RSI and the 4EMA are all indicating a sideways trading Bitcoin in the next few days.

I’ve never experienced Bitcoin to be so boring. But this is getting monotonous.

And in the last 24 hours. The volume of bitcoin traded was $19 billion, which is way below its normal average.

Do you remember a few days ago when I covered the ethereum story where one person actually had two transactions where the fee paid for the transaction was over ten thousand six hundred Etherum, totalling 2.6 million dollars?

This not only happened once but twice now there were multiple theories on why this happened the first being the fact that there was an actual virus on his program causing the transaction and the fee to be reversed. Maybe he wanted to send 10600 Etherum and pay the normal standard fee, which would have been about 50 cents, but that got reversed then tried it again and it still happened.

Each transaction was actually mined by a different mining pool both of which flag the transaction as a mistake and reach out on their social media to call out to the person that sent it to actually get that money returned to them then because the internet is a thing a lot of people started researching the transaction and actually found out that the person That made this transaction is actually company that is involved in a Ponzi scheme. 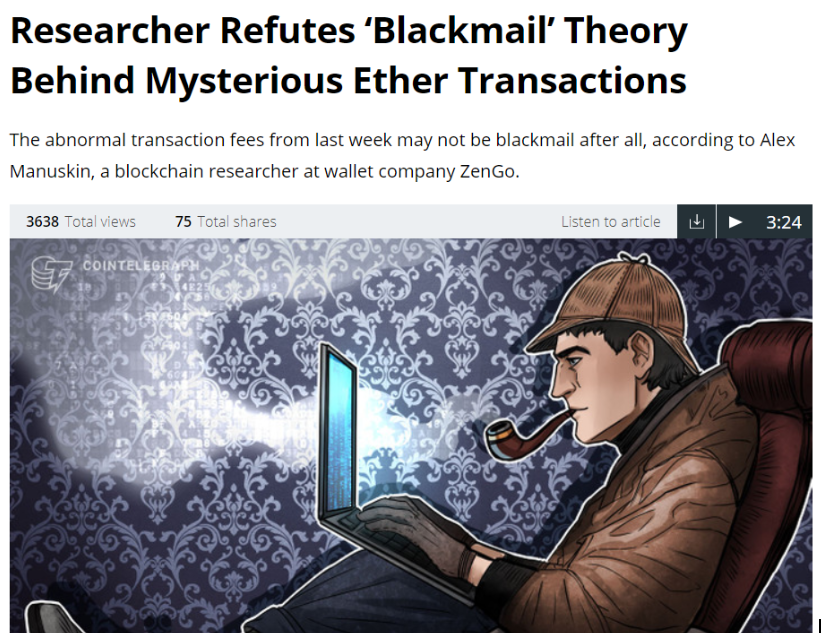 The first suspicious transfer took place on June 10, when $2.6 million in fees was paid to move just 0.55 Ether (ETH). Within 24 hours, the second transaction of 350 ETH was made from the same wallet, spending the exact same amount — $2.6 million — in gas.

The next day, the Ethereum blockchain processed a third abnormal transfer, although from a different wallet. The transaction saw 2,310 ETH — or roughly $0.5 million dollars — being paid to transfer 3,221 Ether.

On June 12, Chinese analysis firm PeckShield concluded that the multimillion-dollar fees were paid by hackers seeking to ransom a cryptocurrency exchange after gaining limited access to the platform’s operational functions. According to PeckShield, the hackers are threatening to empty the exchange’s wallet if they are not paid a bribe.

Vitalik Buterin has since retweeted that article, elaborating on the theory:

“Hackers captured partial access to exchange key; they can’t withdraw but can send no-effect [transactions] with any gas price. So they threaten to ‘burn’ all funds via [transaction fees] unless compensated.”

Miners say no one approached them regarding the transactions

This week, two mining pools involved in the abnormal string of transactions — Etherchain and Sparkpool — both announced they are going to distribute the millions of dollars in fees they received from the strange transactions. Both pools have stressed that they have given sufficient time for the sender to get in touch with them.

“If it were indeed a blackmail attack, we would expect the victim to immediately contact the miners to retrieve the lost funds,” Manuskin argued in a blog post.

What could it be? Money laundering, hackers, glitches in the system, or extortion? Comment your answer in the comments down below.

More than 40 companies including Ripple, Brave and Huobi have joined forces to form the Open Payments Coalition and launch universal payments system PayID.

Reaching more than 100 million consumers, the new payment process will allow users to send or receive money anywhere in the world across any payment network in real-time.

Ripple’s Ethan Beard said PayID aimed to make global payments simple and fast. “If sending a payment were as seamless as sending an email or text, we would all send more payments quickly and easily around the world,” he said.

Liquid Group Inc CEO Mike Kayamori said the cryptocurrency would be a key component: “Payments will need to be interoperable between fiat and cryptocurrency, and easy to send and receive across the globe.”

This is the most important thing about cryptocurrencies, the ability for somebody to send money from one person to another person. If you’ve ever tried to send money to a family member either in Mexico or Europe or Canada, you know that it is a lengthy process and it’s very complicated with many fees involved.

This way I can just sit on my computer, click a few buttons and within about five minutes, he’s got the money and he can do whatever he wants with it.

This is the freedom that cryptocurrencies give us and altcoin seem to be the Forerunner in this transaction race. 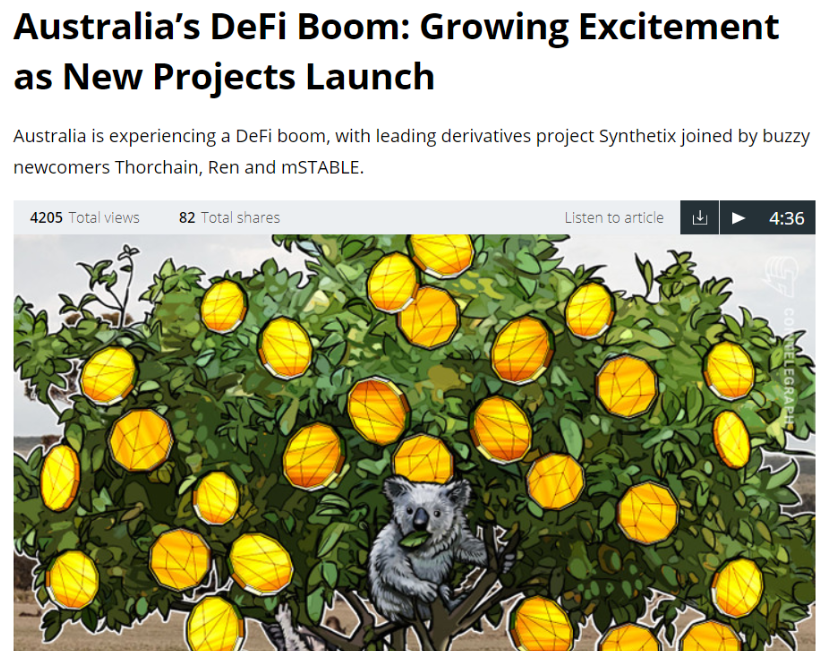 Australia is experiencing a decentralized finance (DeFi) boom, playing host to some of the most talked-about projects in the space.

They include longtime DeFi leader Synthetix (SNX), the up-and-coming Thorchain (RUNE) along with the just-launched Ren (REN) and mSTABLE (META).

“I think the fact that Australia is punching way above its weight in DeFi is probably not well appreciated,” said Henrik Andersson, the Chief Investment Officer from Apollo Capital. The Swedish-born investor spent a decade trading equities on Wall Street for Handelsbanken before moving into crypto and emigrating to Melbourne, Australia.

“You can be a bit blind sometimes and you don’t see what’s going on in your own backyard, but many of these projects are among the top in the world.”

DEFI apps built on ethereum are not only growing the space in cryptocurrency, spreading the adoption of the technology, but it’s also growing the ethereum network and that’s why recently Ethereum has hit its all-time high in usage on their Network.