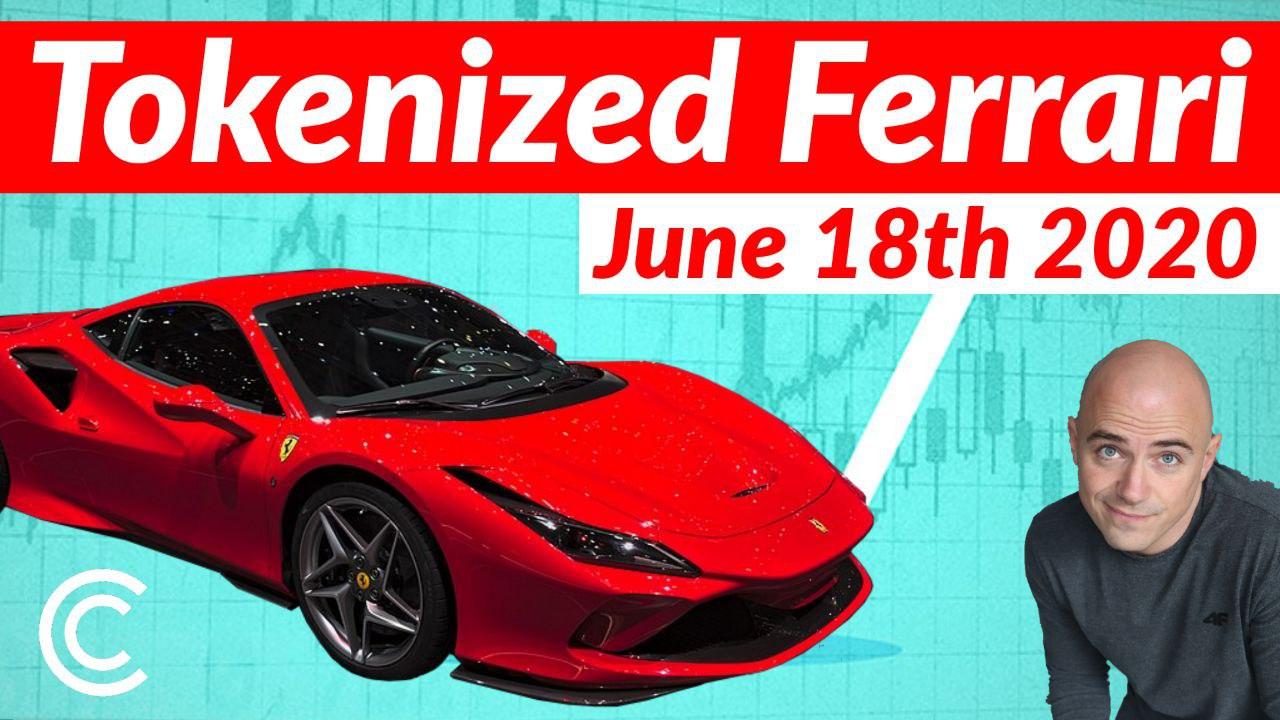 In today’s article, we talk about how the number of Bitcoin Whales has gone up 2% since the Bitcoin halving. Why Bitcoin is trading flat at about $9,400 but investors are still holding on, and some interesting news. A tokenized Ferrari. We also go over the current top cryptocurrency prices as well as a brief analysis on bitcoin to see what it’s going to do in the future. So sit back relax and enjoy the show.

Let’s jump into TradingView and see if we can predict the price of Bitcoin. Now I’ve got the daily chart up here on Trading View. And as you can see here since about May 7th, we have been almost exactly trading on this line of $9,300.

There have been some massive fluctuations with whales buying in and selling off but overall the average is sitting right here at about the middle. Since June 12th we have been trading sideways and all indicators are pointing to the fact that it’s still going to trade sideways for the next few days.

Unless we get some big movement through a whale or some big news in the Bitcoin world. It’s going to keep trading sideways like this because all the indicators are showing that.

Number of Bitcoin ‘Whales’ Has Risen by 2% Since Halving

Bitcoin’s price rally has stalled since the cryptocurrency underwent its third halving on May 11, but investor confidence in the cryptocurrency’s long-term prospects remains strong data shows.
The halving event on May 11 saw the mining reward per block on bitcoin’s blockchain cut from 12.5 BTC to 6.25. The event was expected by many to accelerate the price uptrend from the low of $3,867 seen in March.
So far, though, the leading cryptocurrency by market value has failed to pick up a strong bid and continues to trade below $10,000 – a level seen two days ahead of the halving. Even so, larger investors, often called whales, continue to accumulate coins, as seen below. 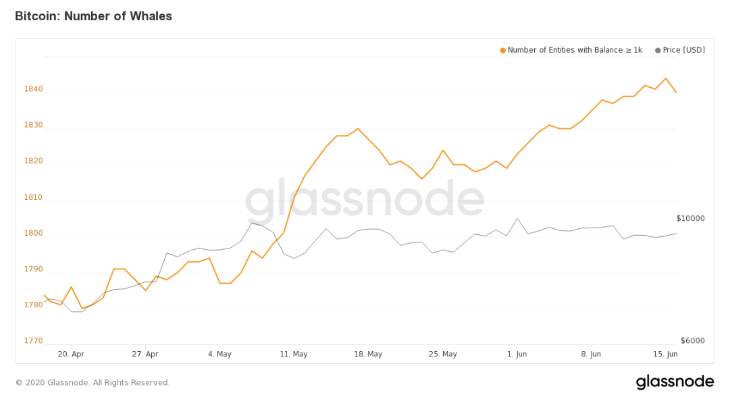 As of Tuesday, the number of bitcoin whales, as represented by the tally of unique entities holding at least 1,000 coins, was 1,840. That’s up nearly 2% from the level of 1,811 observed on May 1, according to data from blockchain analytics firm Glassnode. The metric clocked a recent high of 1,844 on Monday, a level was last seen in November 2017.
The steady accumulation since the halving suggests investor confidence in the long-term bullish narrative surrounding bitcoin.

Most analysts expect the cryptocurrency to rise sharply over the next 12 months on the back of the unprecedented fiscal and monetary stimulus delivered by authorities across the globe in the past three months. Bloomberg analysts said they expect bitcoin to challenge the record high of $20,000 by the end of 2020 on increased institutional participation.
This news is cool. But also scares me because the number of people that hold so much Bitcoin can do massive Market fluctuations if they buy in or sell-off at the same time.

I can promise you right now if the price gets to $10,000 again and 2 whales sell all of their Bitcoins, so that would be two thousand Bitcoins, the price would drop below $8,000. Thus causing a domino effect. Either people are willing to buy below that 8 thousand dollar Mark and smaller people start to buy back in causing the price to slowly creep back up or it causes a market panic and everybody sells off causing the price to drop down even further.

This is the main problem with Bitcoin as an asset class. Because of its limited availability and its restriction on the number of coins that are going to be in existence, scarcity, its all about supply and demand. If somebody pumps 2000 coins into the market, the supply is much higher, but the demands are not there causing the price to drop back down.

This is why I’m so bullish on Ethereum right now because there is no restriction on the number of ethereum coins that can exist. And the main value in ethereum is its utility. Most altcoins are built on the ethereum blockchain and more and more businesses, companies and apps are building on the blockchain.

In yesterday’s news, we discussed how Ethereum network is actually seeing the largest volume on record. Interesting times in the cryptocurrency space. I’m very curious to see what happens between the Battle of Bitcoin and Ethereum. Who will end up on top?

Bitcoin Flat at $9.4K but Investors Are Holding On

A languid Wednesday in traditional markets affected bitcoin as well although it’s been a steady six weeks where the world’s first cryptocurrency outperformed most traditional assets.
Bitcoin (BTC) was trading around $9,265 as of 20:00 UTC (4 p.m. ET), slipping 1.3% over the previous 24 hours.

At 00:00 UTC on Wednesday (8:00 p.m. Tuesday ET), bitcoin was changing hands around $9,500. It then dipped 1.6% to as low as $9,348. The price is now below its 10-day and 50-day moving averages — a bearish signal for market technicians who study charts — but with little action, it looks to be going nowhere for the time being.
This article goes over the other markets including the equities Market as well as gold but it also discusses the fact that more and more people are actually pulling their Bitcoins out of the exchanges.

The number of Bitcoins in circulation on these exchanges is down 5%, meaning that people are withdrawing their Bitcoin and putting them in personal wallets. I believe this is in hopes that Bitcoin will rally in the future, but they don’t want it on exchanges. So they’re holding it personally until the price goes back up. Then once the market gets to the point where they want to sell they would inject that Bitcoin back into the market and sell-off.

I guess we’ll just have to wait and see what happens to bitcoin once it stops trading sideways. 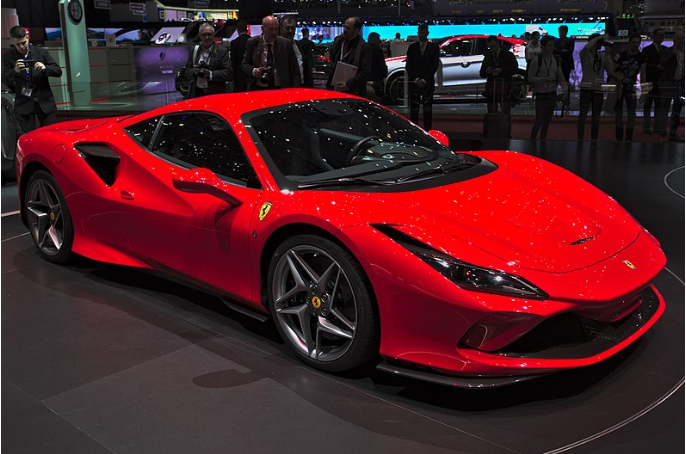 Crypto startup CurioInvest is selling tokens for a rare supercar valued with a $1.1 million hard cap.
The tokens represent a limited-edition 2015 Ferrari F12 TDF, a supercar that in 2016 was valued around $450,000, but which was listed at auction in Los Angeles for more than $1.5 million just eight months later.

Rey Fernando Verboonen, CurioInvest’s co-founder, said that’s not surprising:
“When you look at these assets, you see that rare collectables have outperformed the S&P 500,” he told CoinDesk. “Classic cars and hypercars [a step above supercars] have performed the best.”
Since the start of 2010, the Ferrari Index – an average of the 13 most collectable Ferraris from the 1950s and 1970s – increased by over 233%. During that same timeframe, the S&P 500 – which included its longest bull run in history – increased 173%. While infinitesimal compared to the stock market, Verboonen says it shows supercars are a viable investment option.

There are still a total of 440,000 tokens available for investors, at an asking price of a dollar. The token is built on Ethereum’s ERC-20 standard, which Verboonen says will mean it can practically be traded on any exchange – CurioInvest has already partnered with Huobi – which will help facilitate a secondary market for the coins.

Based in Liechtenstein, CurioInvest’s prospectus was given the nod by the country’s chief financial regulator. While it has hosted other supercar token sales before, Verboonen stresses this will be the first one open to European retail investors. U.S investors will not be able to participate.

Verboonen confirmed a private placement, which was only open to institutional investors, had already filled 60% of the total $1.1 million hard cap.
The token is set up as a bond, according to the prospectus shared with CoinDesk. Each token represents a share of whatever the car’s ultimate sale price. During the first five years, CurioInvest will only consider offers at a minimum 20% above the $1.023 million present valuations. If, after that time, the car still hasn’t been sold, it will go at auction to the highest bidder.
When the Ferrari is sold, the proceeds will be divvied up to token holders after costs, which Verboonen estimates will range between 25,000 and 50,000 CHF (~$26,000 – $52,700), assuming it’s held for the entire five-year cycle.

What an interesting concept to actually incorporate this into collectable cars. We see this in the stock market. Some applications you can buy an entire share of Amazon or Apple but there are certain applications where you can actually buy partial shares or a fraction of a share. Meaning if you only have a hundred dollars to invest but you really want to get into Apple you can buy $100 worth of Apple. You won’t get a whole share but you will get a fraction of the value of that share.

Not many people can afford a $455,000 Supercar. But if one person buys it and divides up shares to token holders, then sells the car for a profit takes his commission and distributes the funds to all the people that wanted to invest in it. This is a great idea. And I absolutely love that this is built on the ethereum network, showing how much of a utility the ethereum network actually is.

This is an extremely attractive idea to me, and I think I’m going to be looking into this to invest some money into supercars and classic cars.

Reference articles:
Number of Bitcoin ‘Whales’ Has Risen by 2% Since Halving
https://www.coindesk.com/number-bitcoin-whales-investors-risen-by-2-halving-price

Bitcoin Flat at $9.4K but Investors Are Holding On
https://www.coindesk.com/market-wrap-bitcoin-flat-at-9-4k-but-investors-are-holding-on