How Bitcoin Memes are driving the dalue and Narrative of Cryptocurrency? | CoinCasso Exchange

How Bitcoin Memes are driving the dalue and Narrative of Cryptocurrency? 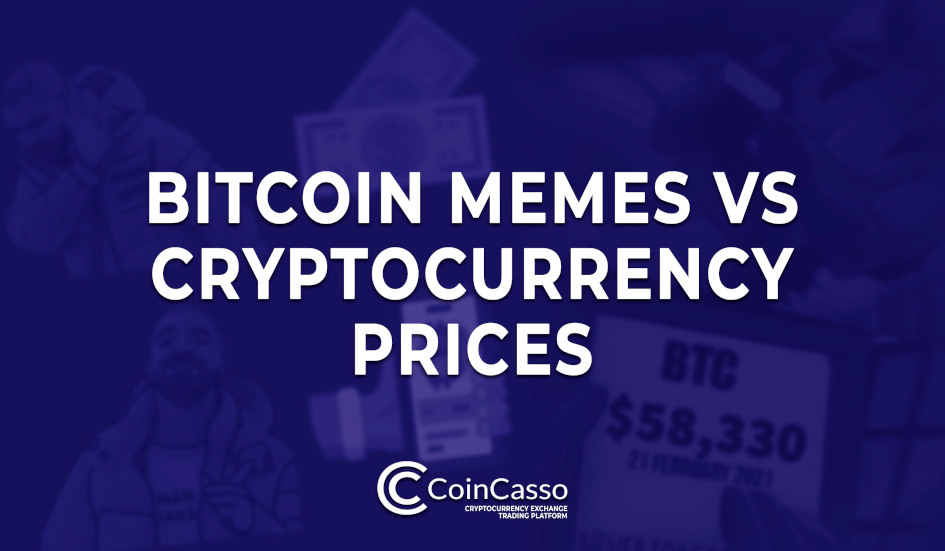 Since its inception 12 years ago, bitcoin has risen so fast to be the buzziest cryptocurrency. With so many cryptocurrencies popping up, project owners try various ways to make the internet associate more with their projects. And with the culture of memes taking over the web, crypto project developers have even adopted memes to spread the fun.

The most recent we’ve witnessed is dogecoin. This cryptocurrency came about like a joke, developed in less than 3 hours by software gurus Jackson Palmer and Billy Markus in 2013. With the growth of this meme-inspired cryptocurrency hitting a record-high 69 percent on 5th May this year, big names such as Tesla and SpaceX CEO Elon Musk couldn’t help but tweet memes about it.

Several other altcoins have also recorded significant growth over the years. But the recent past few weeks have seen a different narrative for the altcoins either. Ether, for instance, dropped by 22 percent to $2,620.97 on Wednesday 7th May. Coinbase also has recorded temporary downstream for some investors as it took a plunge on the morning of Monday 17th.

Is Bitcoin up to par with the rising altcoins?

The journey for bitcoin hasn’t been an easy one, though. Recently, Bitcoin recorded a significant drop of over 50 percent since it last hit a $64,829 record high in mid-April. Across various social platforms like Reddit and Twitter, fledgling millennial investors even acquired the nickname “boomer coin” for the crypto giant during its 30 percent plunge to almost $30,000 on 19th May.

Could that mean that bitcoin, the world’s most dominant cryptocurrency, is facing a major hit? Elon Musk, via a tweet on 7th May, highlighted that cryptocurrency has a promising future but advised investors to do it with caution. Bitcoin has since done wonders to reassure the crypto investors that it’s still in charge of the cryptocurrency markets, thanks to the rise of bitcoin memes on the internet.

What bitcoin memes bring to the crypto world?

Memes are what the internet uses to pass complex phenomena in a simpler and easier to comprehend style. Bitcoin memes have significant sway in the cryptocurrency world. Like the crypto itself, the memes rose from the internet and have crossed hurdles to the mainstream social media to communicate different messages to crypto enthusiasts.

Crypto memes, in general, have been significantly used in driving cryptocurrency acceptance by the masses, signal bullishness on certain assets by traders and boost the crypto token values. A layperson would view a meme as a pure joke and nothing much, but the increased wild zeal on the internet is what further steers the cryptocurrency wheel.

Recently, the internet has expressed its interest in closely following the tweets from Tesla boss Elon Musk. Through a series of tweets that seemed to give dogecoin a boost, netizens and investors have had mixed reactions to bitcoin’s dominance.

Following a series of recent tweets, bitcoin recorded a plunge, trading below $45,000 on Sunday 16th May, the lowest ever recorded since February 2021. Through a tweet on 12th May, Elon Musk had earlier revealed that Tesla had discontinued the acceptance of cryptocurrency for payment because of environmental forces. This move further resulted in a 15% bitcoin price drop forcing the crypto to trade slightly higher than $46,000 immediately after the tweet.

Since Tesla announced their intention to purchase bitcoin worth $1.5 billion in February, every tweet from the company’s chief has significantly impacted the value of the cryptocurrency and people’s perception of it.  The SpaceX boss’s tweets have increasingly continued to influence greatly the cryptocurrency market, particularly bitcoin.

Amid the tricky bitcoin price trends dominating the internet, several memes have emerged from influential figures and netizens expressing different ideologies about bitcoin and other cryptos. Let’s have a wrap on some of these fun memes hitting the news.

The latest bitcoin memes trending on the web are the recently tweeted diamond hands meme by Elon Musk on 19th May. The Tesla boss, through his meme, appeared to pass the message suggesting that Tesla wasn’t planning on selling its recently acquired bitcoins despite the major crash in crypto markets.

As explained by Know Your Meme, the diamond hands refer to those staunch traders that still hold on to their securities and stocks while keeping the faith of the eventual profitability to be earned despite the unstable markets that prevail.

On the Wednesday of 19th May, all cryptocurrencies, including the dominant bitcoin and ethereum, experienced a deep plunge. This crash saw the ten most valuable cryptos reducing in value by double digits. Despite the storm in the crypto market, Tesla isn’t planning on selling its bitcoin cache anytime soon, as suggested by Musk’s tweet.

Although not so popular, this bitcoin meme tweeted by @topherAlba26 seemed to pass a sensitive message to young investors and netizens at large. The meme features a cartoon of Elon Musk holding a Shiba Inu dog with bitcoin sign-labeled headphones.  Although it started as a meme coin, this could indicate that dogecoin will soon be catching up with bitcoin to become one of the most dominant cryptos.

Dogecoin just recently hit a $1 price in the crypto market, and this could be a sign that it will soon be an internet sensation. The recent tweets by Musk can back this up and further express the idea about dogecoin becoming a force to reckon with in the global financial system.

This bitcoin meme features a well-built muscular “Doge” to express traders’ joy when the value of bitcoin rises and a Shiba Inu dog in a relaxed pose to show the traders’ dismay when bitcoin falls. This meme is just among the many others running around the internet to express how influential the Tesla boss’s tweets are to the world of cryptocurrencies.

From this meme, it’s apparent that the traders applaud Musk’s positive influence on bitcoin while anything demeaning from him is received with uproar. Since the meme features the famous Shiba Inu dog, it could also indicate that bitcoin is getting a bit of rivalry from dogecoin.

The Face of Disappointment meme

Tweeted by @vamsixplores on 19th May, the face of disappointment meme in a .gif format points out Elon Musk as a manipulator with a hidden agenda following his series of tweets about bitcoin, dogecoin, and other cryptocurrencies.   The netizen expresses his disappointment in the recent activities done by the Tesla CEO, which negatively impacted the cryptocurrencies.

Other groups with similar ideologies have come up with slogans to try and stop Musk’s activities via tweets that affect cryptocurrency values. Some crypto enthusiasts have gone further to create a coin they term as $STOPELON, which aims to end the SpaceX boss’s activities that negatively affect crypto markets. Musk, through a tweet on 14th May, expressed his strong belief in cryptocurrencies. This appeared to counter the uproar but also warned investors against trading their life savings.

Since the recent plunge of bitcoin, the crypto has been nicknamed different names, including “Boomercoin.” Several bitcoin memes have also emerged among citizens of the internet to express their views about cryptocurrency.

A .gif bitcoin meme tweeted on 5th May by @CanadianDoge garnered a whooping 1.1K likes as it showcases dogecoin animated racing car overtaking its bitcoin counterpart. From this meme, the tweep seemed to suggest that bitcoin will soon be overtaken by dogecoin.

What Chance Does Altcoins Stand Against Bitcoin?

With the increased bitcoin memes roaming the internet and the recent plunge in bitcoin value, some investors are torn between switching to altcoins or continuing trading bitcoin.

However, not every investor agrees that bitcoin is set for a fall. Most investors view bitcoin as a value store and will continue to appreciate over a longer period, which isn’t guaranteed with the altcoins. Through the 12 years that this cryptocurrency has been around, it has seen many other altcoins chip in, but none are anywhere near beating it at its game.

Bitcoin hit news headlines with a low price of $42,000 as of 20th May from the $64,863 all-time high compared to dogecoin priced at 42 cents and recently hitting the $1 mark. With the large difference in value combined with the high availability of dogecoin, it’s evident that the latter won’t record significant growth as much in years to come. Bitcoin will, however, continue to record high values due to its scarcity, despite the current plunge.

As a crypto investor, you’re advised to accept that no cryptocurrency investment comes without risks. However, experts advise that investing your life’s savings in altcoins is highly speculative. It’s recommended to invest only the potion of what you’re willing and can afford to lose.

With so many altcoins rising in popularity, new budding investors seem willing to take the risk with these alternative bitcoin cryptos. The willingness seam to come from the excitement of anticipating bigger things to happen. They seem not to be bothered by the conventional knowledge and wisdom of the traditional investors.

Are you a budding crypto investor looking for a better platform to trade bitcoins and altcoins? Coincasso offers one of the best cryptocurrency trading platforms that suit both crypto newbies and veterans.