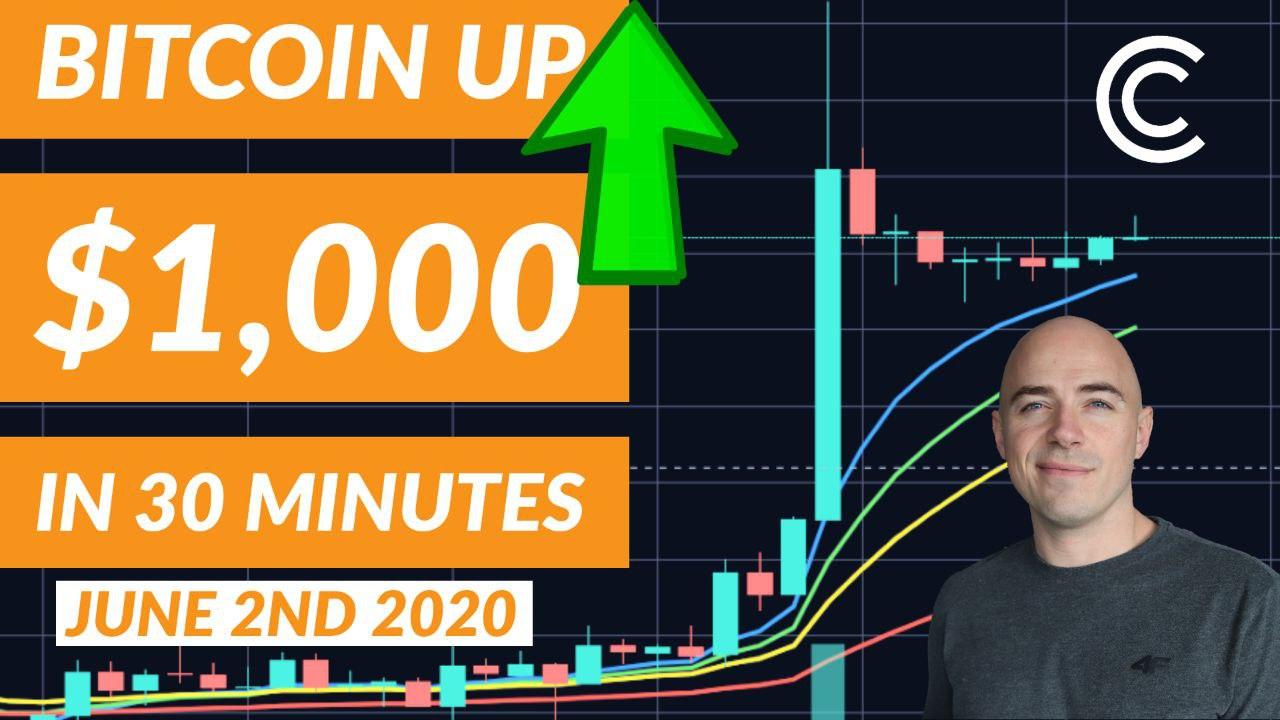 In this Article we’re going to go over todays top crypto currency prices. We’re going to talk about why Bitcoin almost hit $10,500 last night. Do some detailed analysis on Bitcoin. Looking at the MACD, RSI and the 4EMA. We’re also going to take a quick look at the news to see if there’s any articles written as to why Bitcoin went up $1,000 in the last 24 hours.

Now, let’s dive into the computer and do a little bit of analysis on this. 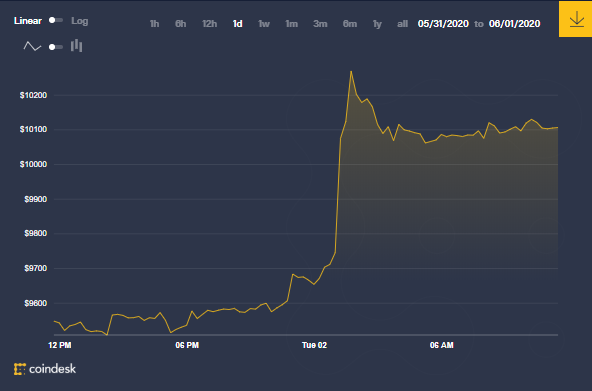 If you look at the chart here, you can see it around 6 p.m. Eastern time. We saw a massive Spike up nearly hitting that $10,500 market and subsequently dropping back down but staying above that $10,000 barrier, which is a very good sign.

The reason I like the MACD so much is because it shows the ebb and flow of the market. You can see it always winds up and then winds down. The reason this spike is so interesting to me and why I did not actually see it coming is if you look at the MACD.

We have this weaning taper and when it switches from positive to negative, it’s a very small increment here. You can see we skip the entire weaning phase and just shot straight up to three gigantic candles.

Now lets zoom out to show you the trend of the market since this last Peak at $13,779. If you put up these parallel lines and touch as many of the resistance points as possible, you’re going to get a good indication as to where the market is trending as you can see overall. We were trending downwards.

But as of May 7th, we’ve actually broken out of that Trend and are starting to climb upwards. So if we draw new trend lines because it is starting to go up. We now see our new trajectory hitting key resistance points like 12,000. 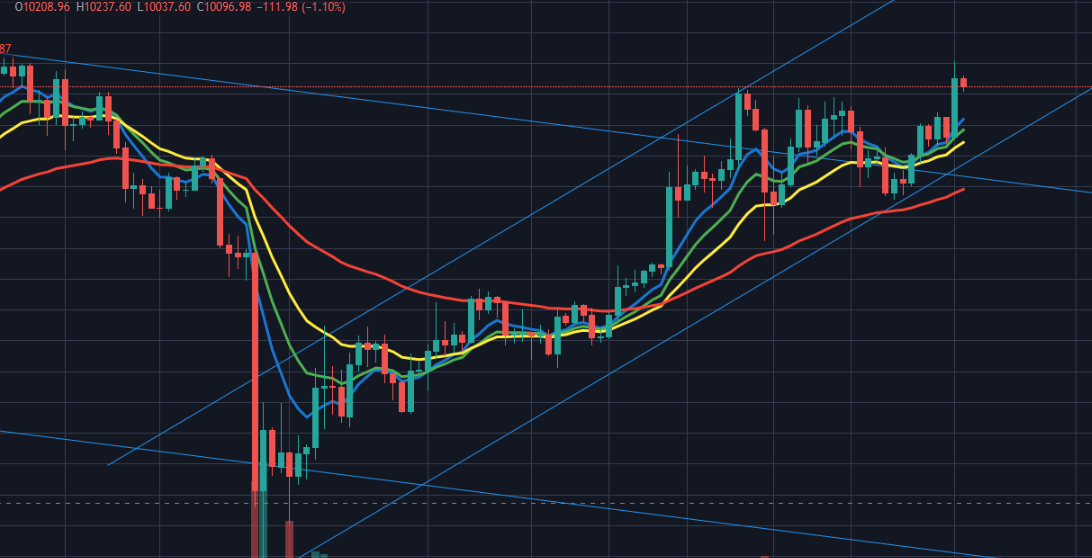 So theoretically even if it does drop back down we won’t get below $9,900 but that’s only if we continue this upwards Trend. If we start to come back down, this resistance level has now turned to a support. So on the down side, say August, we’re looking at a low of $8,000 and a potential high of about $15,000.

This either means that there’s a few individual gigantic whales getting into the market or these big Financial institutions like JP Morgan and Paul Tudor Jones have allocated 1 to 2% of their assets, like they said that they were going to do, into their portfolios.

This is a massive buy in. We haven’t seen volume like this since the March 12th crash, and that volume was going down.

Now, let’s jump into three news articles to see if there’s any different information in here. 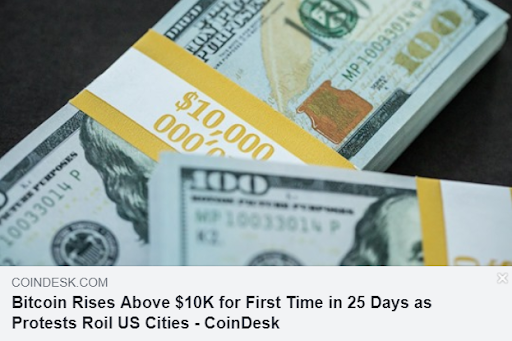 The large spike in BTC’s price comes as violence erupts on the sixth day of protests over the death of George Floyd at the hands of Minneapolis police. BTC has since cooled slightly and is currently changing hands for around $10,19

I honestly don’t think this is about the riots. I don’t think that people are distracting themselves from the riots in the United States to jump into Bitcoin. So this is definitely a speculative article. 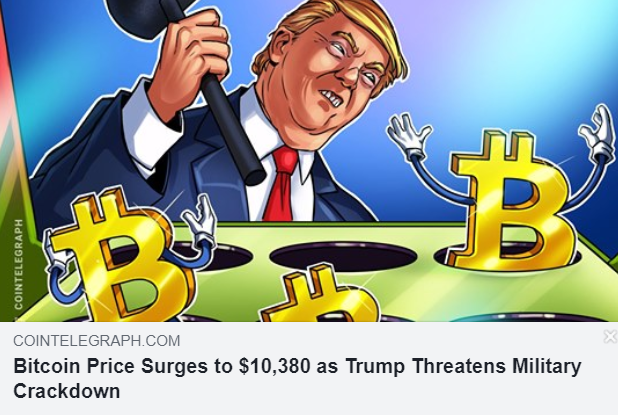 The move above the crucial $10K mark occurred as U.S. President Donald Trump mobilized local police and the National Guard to disperse masses of protestors on the White House grounds.

Again, this is completely speculative, because those things just happened to occur at the same time.I don’t think everybody got the same idea simultaneously in the United States and around the world to actually purchase 38 billion dollars worth of bitcoin. 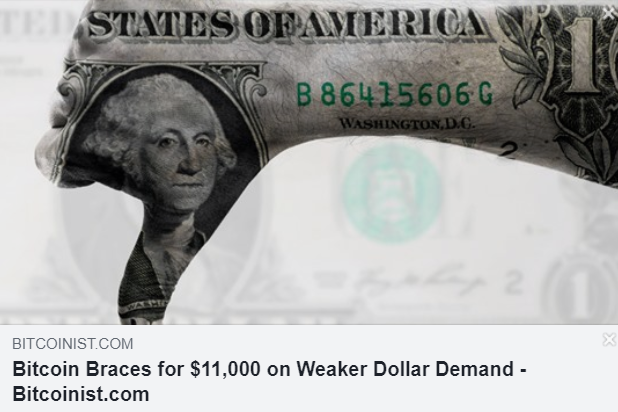 The gains surfaced as investors sold the US dollar for riskier assets amid optimism about economic recovery.

Other factors, including the U.S.-China tensions and the stock market’s upside, also contributed to the rally.

Bitcoin rose Monday in a surprising rally that took its price up by almost $1,000 in less than 12 hours.

On Monday, the WSJ Dollar Index, which measures the greenback against 16 other currencies, plunged 0.57 percent to 92. Observers noted that investors sold the dollar to buy riskier currencies, a sentiment that may have fueled the bitcoin price rally above $10,000.

Now this makes a lot more sense, but not in the volume that we saw in the last 24 hours. I honestly think that these large financial institutions moved a lot of assets into Bitcoin and cryptocurrencies. I’d love to know your opinion. Comment down below and let me know why you think Bitcoin went up a $1,000 in the last 24 hours.