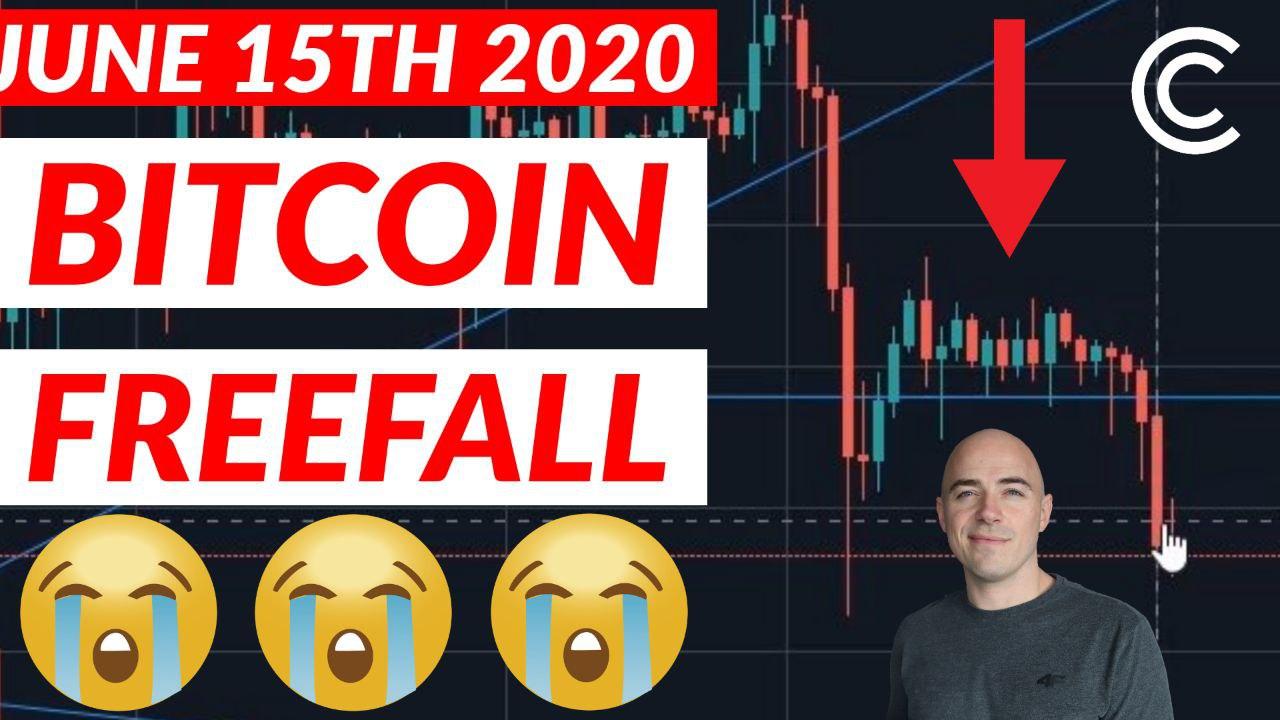 In today’s article we’re going to talk about how Bitcoin is still up 30% over the year despite a bumpy week. The number of investors holding at least 0.1 Bitcoin are very high, and Ethereum options open interest up 315%. We also go over the current top crypto currency prices as well as a brief analysis on bitcoin.

As always the publication is sponsored by CoinCasso. So if you are currently unsatisfied with your cryptocurrency exchange, consider checking out CoinCasso in the link for a $35 sign up bonus.

Now, let’s jump into trading View and do a quick analysis on Bitcoin.

This is the March 12th bottom of Bitcoin and ever since then, even though we’ve had some big ups and downs. We’ve been on this nice upwards climb. 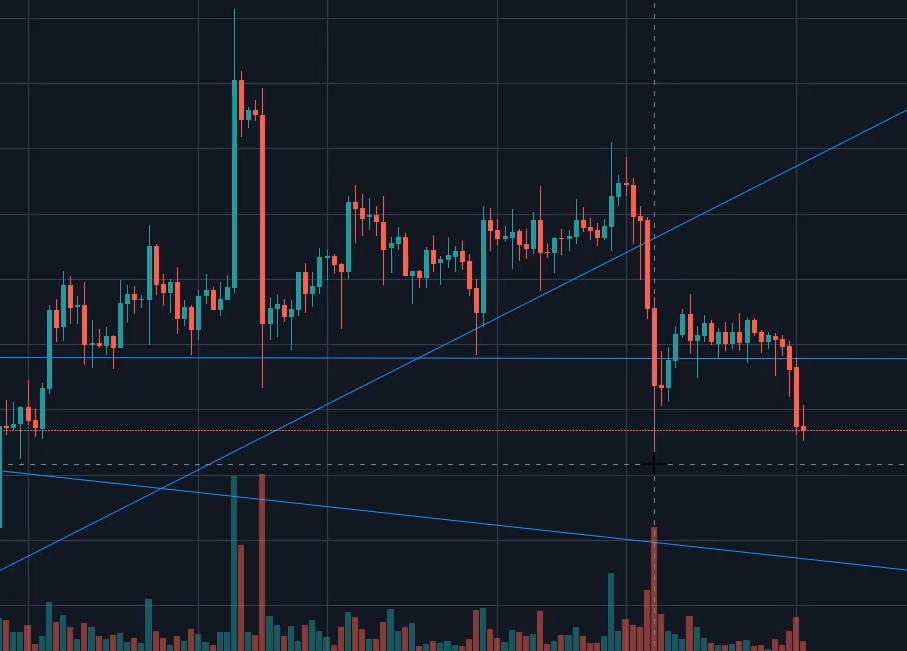 Let’s take an even closer look and see exactly what I’m talking about. So as the U.S. Stock markets went down nearly seven percent in value in one day, the price of Bitcoin followed suit and dropped all the way down to nearly $9,000.

It did immediately come back up to that average bitcoin price of $9,300 which was a good sign showing Bitcoins resilience. But in the last 24 hours, it did drop down below that $9,300 Mark and has been diving ever since.

Now if you’re wondering where bottom is going to be, I believe it might be this $8,700 Mark right here. 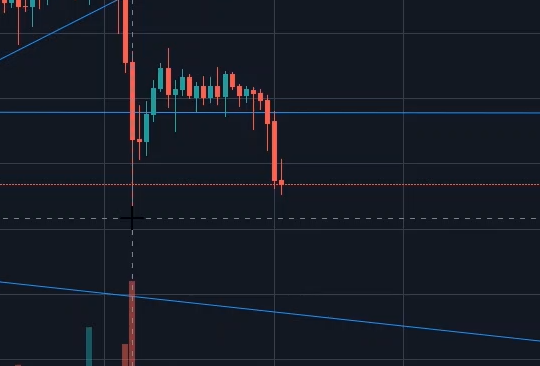 I’ve been talking about this for weeks now.

So Bitcoin currently sitting at $9,114 and we may see at the bottom down here at about $8,700 and if it drops through that then it’s just in this Game Over Zone.

Despite sliding in sympathy with stocks this week, bitcoin’s performance remains healthy this year, up 30% so far.

At 00:00 UTC on Friday (8:00 p.m. Thursday ET), bitcoin was changing hands around $9,474 on spot exchanges such as Coinbase. The price began to decline, dipping to as low as $9,301, before picking up a bit. The price is well below the 50-day and 10-day moving averages, a bearish technical indicator.

Stocks fell Thursday, a day after Federal Reserve Chairman Jerome Powell gave a dour outlook on the economy. Bitcoin was caught up in the decline.

When prices in the bitcoin market began to fall, liquidations on BitMEX intensified the movement, squeezing out long positions. Hourly liquidations hit $45 million as of 16:00 UTC Thursday.

Now if you remember about a month ago Bitcoin actually broke off of the trajectory of the S&P 500 and went on its own course. With this latest stock market drop we did see Bitcoin re- coupled
with the economy and actually drop in congruence with it.

So unless something major happens, I think we just have to wait until the market. Starts going back up then Bitcoin. Regain, its upwards momentum.

A Record Number of Investors Are Holding at Least 0.1 BTC 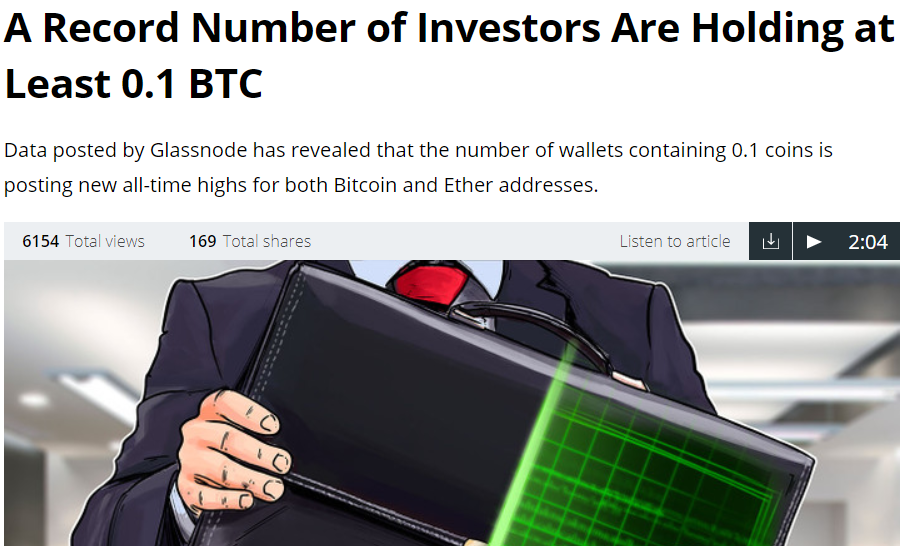 Data posted by Glassnode has revealed that the number of wallets containing 0.1 coins is posting new all-time highs for both Bitcoin and Ether addresses.

The number of investors with Bitcoin (BTC) holdings of 0.1 coins or more has broken into new all-time highs.

Data published by crypto data aggregator Glassnode on June 13 shows the number of wallets holding 0.1 BTC or more reaching a new record of 3,054,282 — beating out May 21’s previous record by 212 addresses.

The number of wallets holding 0.1 BTC or greater has steadily increased since spiking and falling as the 2017 bull run reached its peak, with new records above 2.75 million consistently being set since April 2019.

This is a good sign for Bitcoin because that means more and more people are adopting the cryptocurrency technology. This is also the fomo mentality, the fear of missing out. So a lot of people are just getting in and holding it just so they don’t miss the boat. 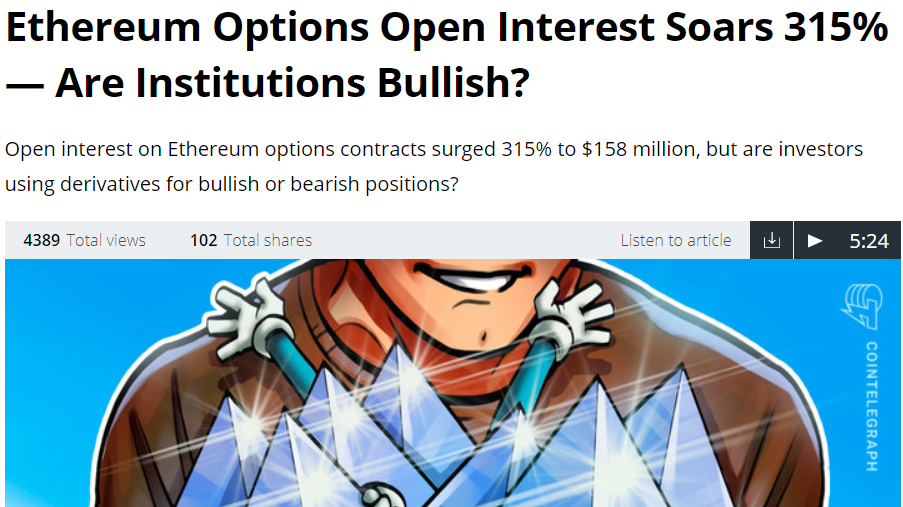 Open interest on Ethereum options contracts surged 315% to $158 million, but are investors using derivatives for bullish or bearish positions?

Ether (ETH) options were launched over a year ago at Deribit derivatives exchange but they have only recently gained traction.

Open interest is the main gauge for derivative contracts activity, and on Ether options it has soared by 315% over the past two months to $158 million.

This surge in OI has many retail investors issuing bullish calls for Ether’s future price but it’s important that participants take a deeper look behind the numbers.

This open interest figure doesn’t necessarily mean that professional investors are either bullish or bearish.

In this article it shows that nearly 20% more people are on the bearish side versus the bullish side. Which means they’re betting on ethereum dropping in value. So if you’re invested in cryptocurrencies and you’ve been in this space for quite some time, you know, what’s about to happen.

Over the next week or so, we may see a very rough ride in Bitcoin and Other cryptocurrencies, I’m pretty sure we’re going to see some massive drops and prices all across the board, but then we should start seeing a nice upswing because there are still people that want to get into Bitcoin, but the price is too high.

So as it drops down more and more people will invest bringing the price back up. It’s strictly going to be a battle of price and supply and demand.

Reference Articles:
Bitcoin Is Still Up 30% in 2020 After a Bumpy Week
A Record Number of Investors Are Holding at Least 0.1 BTC
Ethereum Options Open Interest Soars 315% — Are Institutions Bullish?