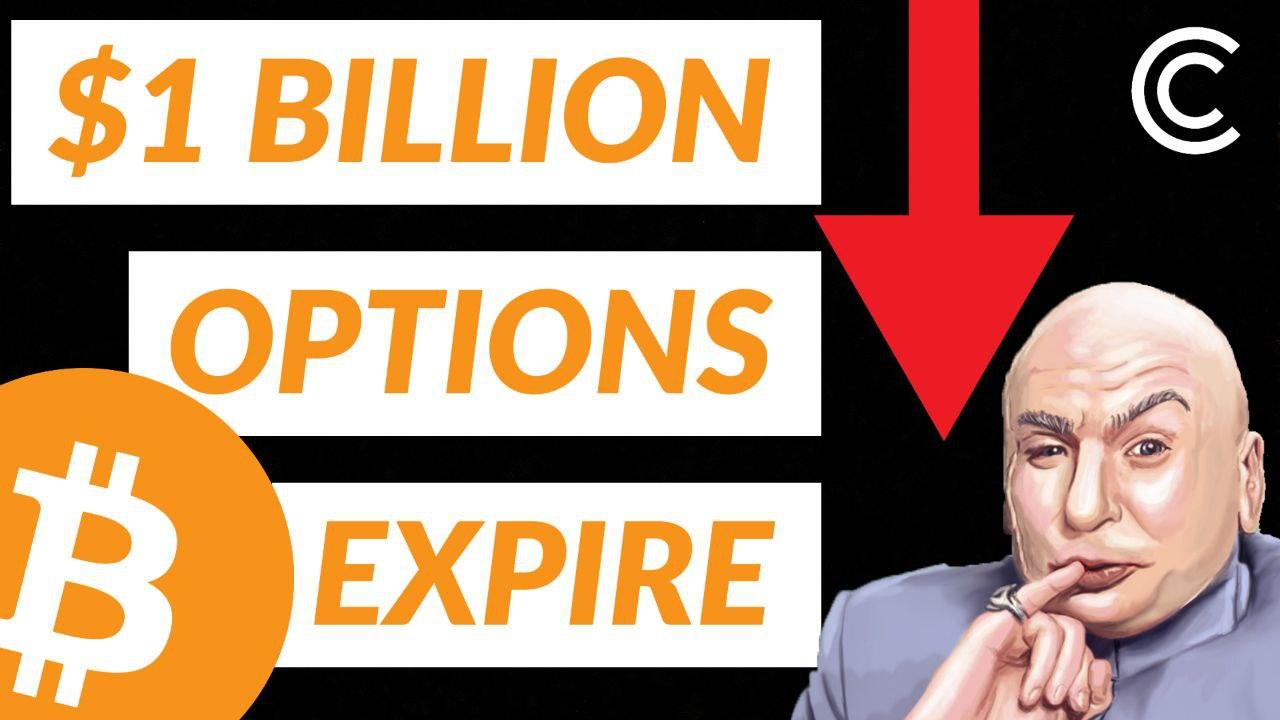 In today’s article we talk about how telegram agrees to pay $18.5 million in SEC lawsuit. AMD’s new blockchain project that they’re not talking about and how they need 20,000 GPUs, and the most important piece of news for today. $1 billion dollars worth of BTC options expiring today. We also go over the current top cryptocurrency prices as well as a brief analysis on bitcoin to see where it’s going to go in the future.

And right now it’s trading between 9200 and 9300 but no amount of technical analysis in the world will actually prepare me for what’s going to happen today on Friday. And that is 1 billion dollars worth of BTC options being liquidated.

Telegram will pay $18.5 million and notify the U.S. Securities and Exchange Commission (SEC) if it plans to issue any sort of digital currency in the next three years in a proposed settlement with the securities regulator, a court filing revealed Thursday.

The settlement, which was reached on June 11 and effectively ends a six-month court fight with the agency, also indicates the messaging platform will be responsible for a $1.22 billion disgorgement that is offset by $1.19 billion paid as “termination amounts” in investors’ purchase agreements and the amounts that some investors loaned to Telegram earlier this year. Telegram has 30 days to pay the SEC penalty and up to four years to pay back investors under the settlement.

Additionally, Telegram should notify the SEC if the company wants to issue “‘cryptocurrencies,’ ‘digital coins,’ ‘digital tokens,’ or any similar digital asset issued or transferred using distributed ledger technology” at any point over the next three years. The notification – which is not a request for an approval – should come 45 days prior to the planned issuance, the settlement reads.

The settlement apparently takes into consideration Telegram’s commitment to terminate TON’s development and pay back investors.

Previously, Telegram offered its non-U.S. investors an opportunity to loan their money to the company for one year, with a pledge to pay back 110% of the amount invested next April. This was as an alternative to getting back 72% of the investment this May – the amount previously agreed upon by the investors. Not everyone was happy with the deal, with some investors saying they considered suing Telegram.

The SEC sued Telegram in October 2019 after the company raised $1.7 billion to fund the development of its TON blockchain project. A federal court sided with the SEC when the agency asked to block Telegram from issuing any tokens as it had planned to do earlier this year. While Telegram appealed initially, it later halted this effort.

The company announced it would be ceasing work on TON on May 27, though it published some code for the project.

After adding “some almost-finished components of TON Storage, TON Payments and CPS Fift from testing branches into the main branch,” “the original TON development team is discontinuing its active involvement with the TON project,” the update said.

While Telegram ostensibly no longer plans to update its code for TON, it did write that “some minor bug fixes and Github issue answers may occasionally appear if any of the members of the original team have the spare time and inclination to contribute to the community’s efforts.”

Telegram managed to release most of the TON code, including blockchain nodes, a technical paper on TON’s consensus protocol and a native crypto wallet. While Telegram itself claimed it would no longer launch TON, another entity, TON Labs, launched its own version of the network with a group of professional validators.

In a statement shared with CoinDesk and later published to Telegram founder Pavel Durov’s Telegram channel, the company said the settlement “reconfirms our commitment to repay the remaining funds to purchasers.”

“Since we saw limited value in pursuing the court case further, we welcomed the opportunity to resolve it without admitting or denying our liability,” the statement said, concluding that he hoped the U.S. becomes friendlier to blockchain in the future.

A joint data-center venture between ConsenSys and chip maker AMD has so far raised over $20 million to triple its GPU capacity, but won’t say exactly what they’re for.

In crypto, the term “data center” is usually just another way of saying mining facility. But that’s not just what it means to W3BCLOUD, the ConsenSys and AMD-backed venture. Trouble is, that’s as much as we could squeeze out of them on the subject.

Speaking to CoinDesk, W3BCLOUD co-founders Wael Aburida and Sami Issa, who is also CEO, said they were using $20.5 million raised in the initial part of a seed round to ramp up the GPU capacity at a data center in Washington State.

W3BCLOUD currently operates 6,000 GPUs, but the $20.5 million investment will enable it to more than triple that number to 20,000 units, with plans for even more in the future. “We’re using over 90% of our capital to deploy computer resources,” Aburida said. “It’s going to make sure that we have the horsepower from a computer perspective to serve the needs of our customers.”

W3BCLOUD, which was established in early 2019 is based in Ireland and has a sub-entity in London. Companies House, the U.K. company registry, lists ConsenSys founder Joe Lubin and his chief of staff, Jeremy Millar, as directors.

Usually associated in the blockchain space with mining cryptocurrencies, GPUs are versatile and can perform a range of other functions, such as processing blockchain traffic, increasing network storage and improving latency. They could also be put to work in the emerging Web3 and decentralized finance (DeFi) spaces.

Broadly, the GPUs will form the backbone for a new decentralized computing infrastructure, Aburida said, and they’ll be deployed initially onto Ethereum. But both co-founders refused to be drawn on the specifics, and wouldn’t say what initiatives, if any, were in the pipeline.

“In a future discussion we’ll say more,” said Issa. He was quick to emphasize the data centers could also be used to facilitate a much broader range of previously unheard of decentralized functions, such as decentralized artificial intelligence and decentralized virtual reality.

W3BCLOUD is still in the middle of its seed round and those involved hope to reach its funding target of $30 million. So far, the company has attracted investment from its main backers, ConsenSys and AMD, as well as a handful of family offices in the United Arab Emirates.

“The point of this call, really, is we’re very excited about hitting the important milestone. We’ve gotten [so far] to $20.5 million as part of this first round,” Aburida said.

Some of the funding will also go towards a new data center somewhere in the European Union. “We have a European customer, for example, who we can’t name, that wants us to be in Europe,” Issa said.

They are also receiving interest from a few sovereign wealth funds, according to Aburida. An institutional round is planned for sometime in 2021, although a fundraising target “has not yet been defined.”

“There are a bunch of things that we can’t talk about at this stage, but I think you can see the opportunity as we see it,” Issa said.

W3BCLOUD is also interested, initially, in working on other proof-of-work blockchains.

Many blockchains struggle, at the initial stage, to get much traction, Aburida said, and the firm’s data centers could maybe act as a “white knight,” providing early-stage computing power to give projects a crucial leg up and shield them from so-called 51% attacks. These occur when a bad actor can take over more than half of a network’s computing power and can then rewrite transactions on the blockchain.

While the plans still haven’t been fully fleshed out yet, “the important point is we’re going to be a significant player in terms of numbers for GPUs,” Aburida said.

Even $7.9K Bitcoin Price Won’t Help Bears Ahead of $1B BTC Options Expiry 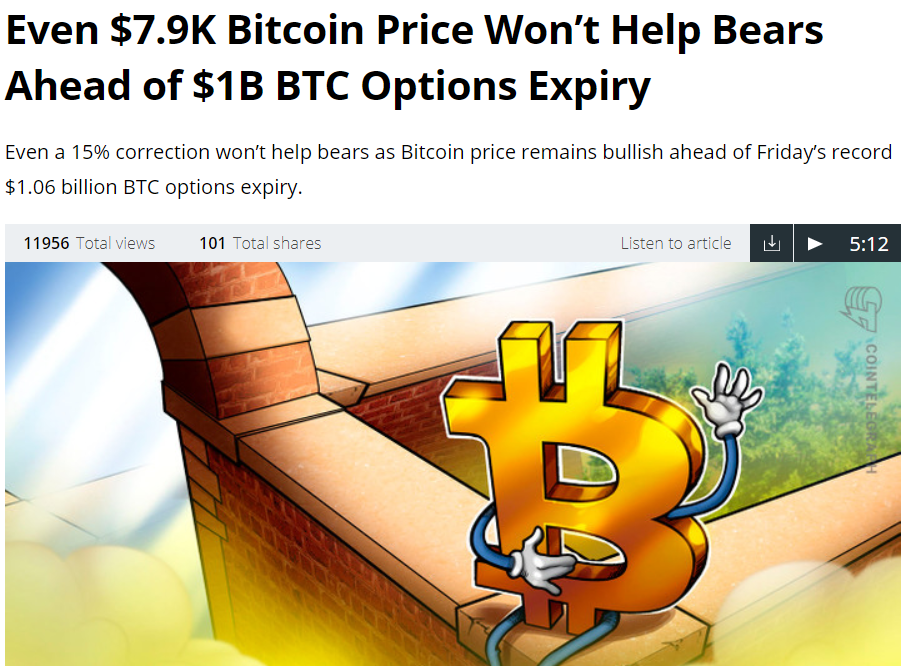 This Friday’s Bitcoin (BTC) futures and options expiry has been causing anxiety and excitement amongst traders as the price has oscillated with no clear trend for the past 30 days.

There have been moments of euphoria as the price briefly broke the $10,000 level earlier this month, but recently emotions have become slightly bearish as the market dropped below $9,000 on Wednesday night.

Correlations between crypto and traditional markets were all the rage leading into the Bitcoin halving, but now it seems most traders have forgotten that the recent increase in correlation between Bitcoin and the S&P 500 could be the root of BTC’s current price volatility.

There’s not much gain in trying to understand the rationale behind this, although recent declining volume both in spot and derivatives exchanges certainly makes it easier for algorithmic traders to impose their will.

This ongoing heated debate on whether Bitcoin futures and options could be the main factor behind the recent volatility seems somewhat pointless as there will always be players positioning for an upside, while short-sellers are expecting a negative price move.

Open interest can be deceiving

After all, the numbers are quite staggering. Currently, the total BTC futures open interest is over $3.8 billion, while options markets’ open interest has just reached an all-time high at $1.7 billion.

But the question is, what exactly is behind those numbers?