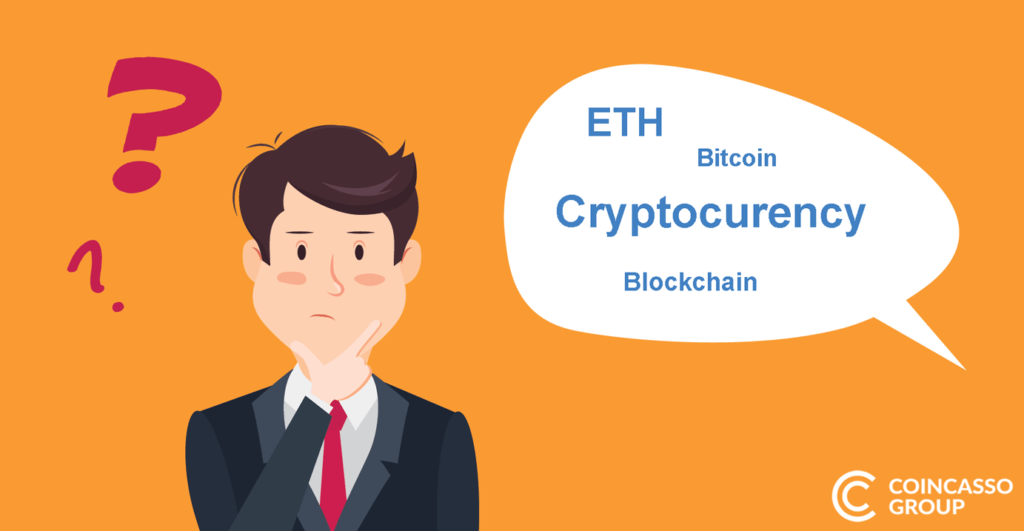 Are you new to the world of blockchain and cryptocurrencies? Do you want to read our blog articles with a complete understanding? We have prepared part 1 of a glossary for “cryptocurrency begginers”! Check out it below:

In simple words, it is a virtual currency which – as its name indicates – uses cryptography to secure financial transactions. The main advantage of a cryptocurrency is that it is decentralized unlike “traditional” currencies (i.e., FIAT currencies – check out the definition in the later part of the article). Due to this fact, cryptocurrency transfers are secure, anonymous and transparent. Currently, there are over 4000 existing cryptocurrencies.

Most cryptocurrencies are based on blockchain technology.

It is a decentralized and distributed database in the open source model. It works in a P2P network, and it is not controlled by any third party, i.e. there are no central computers and there is no centralized data storage space. It is an anonymous and verifiable ledger that anyone can access.

As its names indicates, blockchain is a chain of blocks. This chain is a list of records with information which is linked thanks to cryptography. Blockchain saves transactions in a permanent and secure way.

Bitcoin and Ether are some of the cryptocurrencies which are based on blockchain.

Earlier we also prepared blockchain explained article, where you can find more info about this topic.

It is the most well-known and the largest cryptocurrency by market capitalization. It was created in 2009 by the anonymous person using a name Satoshi Nakamoto. It is considered to be the first decentralized cryptocurrency.

It is called “a younger brother of Bitcoin”. It is the second most well-known cryptocurrency platform, currently ranked in top 3 at the market capitalization ranking. It was created by Vitalik Buterin.

Ether (ETH) is a name of cryptocurrency in Ethereum platform. Ethereum provides a decentralized virtual machine, the Ethereum Virtual Machine (EVM), and it was designed to feature Smart Contracts (check out its definition later in our glossary).

In opposite to Bitcoin, on Ethereum there is a possibility for users to create their own cryptocurrencies and run blockchain projects (for example blockchain ICO and blockchain STO – check definitions below).

It is a total value of all company’s shares of stock. For example, a company with 1 million shares with a price of $10 for a share possesses a market capitalization equal to $10 million.

It is a currency which is not based on material goods, such as gold or silver. Its value usually comes from political regulations, and its value is set by goverments or because involved parties agreed on its exchange value.

The history of FIAT money dates back to 11th century. It was created in China and started dominating in the previous century. After US president R. Nixon decoupled USD from gold in 1971, FIAT currencies started to become popular all over the world.

In opposite to cryptocurrencies, FIAT currencies are controlled by financial institutions and may greatly lose value due to inflation.

In simple words, we call altcoins the all cryptocurrencies except for Bitcoin.

Tokens and altcoins are mistakenly used as synonyms as their structure is different. Altcoins possess their own separate blockchain.

The most well-known altcoin today is Ethereum.

Together with altcoins, tokens are two subsets of cryptocurrencies.

Unlike altcoins, tokens operate on a top of the blockchain. They were designed to facilitate the implementation of decentralized applications. Cryptocurrency tokens are much easier to create than altcoins and therefore, about 80% of circulating coins today are tokens.

To mention an example, Ethereum supports the development of additional cryptocurrency tokens, and crypto platforms such as TRON and EOS began as Ethereum-based tokens.

Satoshi Nakamoto is an anonymous pseudonym of a person who created Bitcoin in 2009. There have been many suspicions about who is “hidden” behind this name, but none of them are confirmed. It is claimed that Nakamoto is a male, was born in 1975 and comes from Japan.

ICO is the abbreviation of Initial Coin Offering. It is a type of funding using cryptocurrencies. In simple words, when someone creates a new crypto project, he can receive funds from investors by selling tokens in exchange for legal tender or other cryptocurrencies such as Bitcoin or Ethereum.

For example, during ICO, Ethereum raised $18 million, and EOS platform as much as $185 million.

STO stands for Security Token Offering, and it is a different form or raising funds than ICO. In STO, users can buy crypto tokens, which are backed by an asset or a revenue of a company.

STO, as its name indicates, features security tokens, and therefore, STO provides financial security, also because it is subject to federal trade regulations.

You can think of utility tokens (ICO) as a chance for a future reward in case the new crypto project succeeds, while investing during STO is more financially stable.

As its name indicates, Stablecoin holds stable values, and one of the examples of Stablecoins is cryptocurrency Tether (USDT), which value is equal to about 1 USD. Overall, the value of Stablecoin can be attached to traditional currencies (i.e. FIAT money) or material goods such as gold and silver.

Smart Contracts are a digital form of traditional contracts. They are simply programs that operate on many crypto platforms, for example, Ethereum and NEO, and they are designed to ensure that all parties which take part in transactions are secure regardless of trust.

Cryptocurrency mining is a process in which new cryptocurrency transactions are added to the blockchain. People who are responsible for verifying this information and therefore, updating the ledger are called miners.

You may have heard already of making money by mining Bitcoins. Remember that today you need very advanced and specialized hardware to make a significant profit by being a miner.

Decentralized application (dApp) is an application that runs on a P2P (peer-to-peer) network on many computers rather than just one single computer. Decentralization means that any third party does not control these applications.

In simple words, blocktime is the time during which a network generates one extra block. In the case of Bitcoin, it is 10 minutes, however for example in EOS, it is just 0.5 seconds.

Firstly, you need to understand that most cryptocurrencies possess a limited supply, therefore, there can’t be created an infinite amount of units.

Total supply is the maximum amount of coins of the cryptocurrency which can be created.

Circulating supply is the current amount of coins of the cryptocurrency which have been mined and therefore, there are in circulation.

After reading our glossary, you should have a basic understanding of what we are discussing on our blog. However, it’s not everything what we have prepared for “cryptocurrency dummies”!

Stay tuned for a part 2, where we will be introducing you to more advanced concepts, such as consensus mechanisms. See you soon!