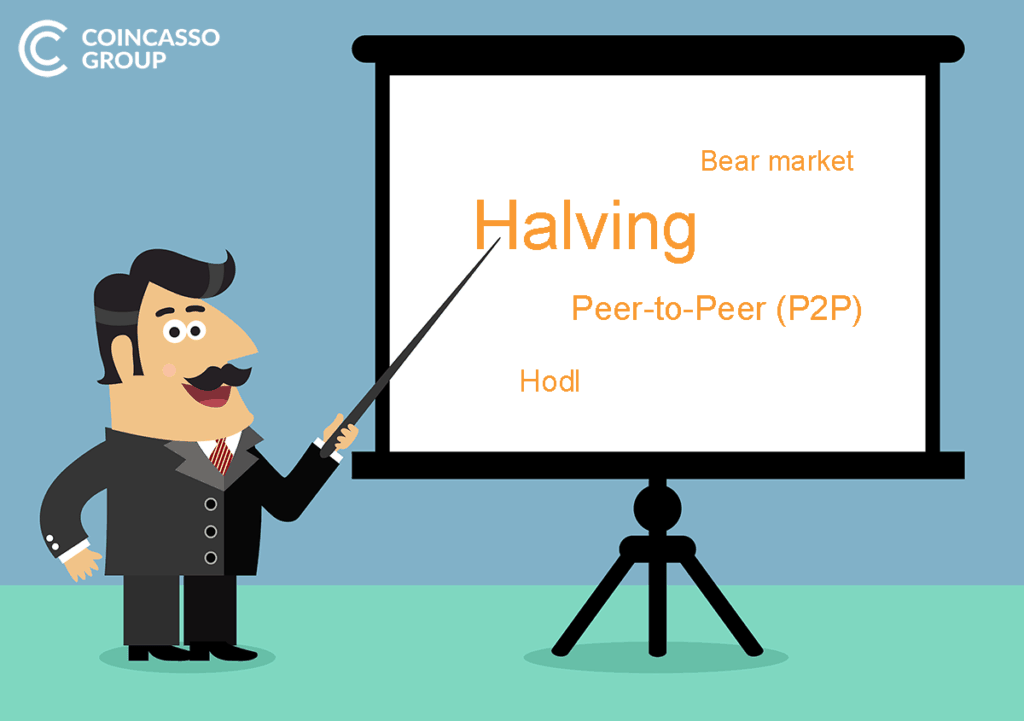 Are you new to the cryptocurrencies world? After publishing Part 1 of our basic cryptocurrency glossary, we are ready for Part 2! This time we will discuss some simple and some advanced concepts, so fasten your seatbelts and read carefully!

The bull market is simply a market in which prices are increasing. For example, at the turn of 2017 and 2018, the cryptocurrency market was experiencing a boom, and the Bitcoin price increased to around 20,000 USD.

The bear market is the opposite to bull market – a period when the prices are decreasing. For example, the almost entire 2018 experienced a fall in the cryptocurrency market. For instance, Bitcoin price decreased to about 3500 USD as of January 2019.

The whitepaper is a document created by a cryptocurrency company that aims to present a project during ICO.  It contains a detailed description of the product. You can check out CoinCasso whitepaper. Soon, we will present the new version of this document. Stay informed!

Cryptocurrency trading is simply the exchange of cryptocurrencies, i.e., you can buy or sell cryptocurrency for another virtual or FIAT currency. You can trade our CCX tokens on our internal trade module, and other currencies on CoinCasso Exchange. In the upcoming months, we plan to present the new version (2.0) of our exchange.

Hodl is a slang expression, meaning buying and holding cryptocurrencies with the hope of increasing its price without active trading. This word became popular in December 2013 after at the Bitcoin Forum an apparently drunk user published a typo: “I AM HODLING”.

P2P, or peer-to-peer, is a computer network that allows users to communicate on equivalent terms. Anyone using this type of web application can initiate a connection at any time. The P2P structure does not have a central server. This means that peer-to-peer exchange allows individuals to transfer currencies from their accounts to others without having to go through a financial institution.

Halving is a term related to mining – it means a reduction of prizes for miners for extracting new blocks by 50%. For example, Bitcoin halving takes place every 210,000 blocks and the next one is waiting for us in May 2020, when the prize will fall from 12.5 BTC to 6.25 BTC.

Thanks to the introduction of halving, it is more likely that the price increase of Bitcoin will be stable, because the number of new Bitcoins added to the crypto market is reduced over time.

Ethereum’s hard fork. What is hard fork? We have already mentioned that cryptocurrency transactions are based on blockchain technology. Hard fork, as its name indicates, is the division of the blockchain.

A fork happens on cryptocurrencies when two blocks are dug in a similar time and it is impossible to tell which blockchain is dominant. It is decisive to dig further blocks, this chain which is longer becomes the main chain, and the shorter one becomes “orphan”, i,e. the miners stop mining it.

However, if some of the miners do not accept the changes and stay on the old chain, the network breaks down and a new cryptocurrency is created. An example is Ethereum Classic (Ethereum’s fork).

A soft fork is a change in the software protocol in which only previously valid blocks and transactions are made invalid. Because the old nodes consider the new blocks to be correct, the software is backwards compatible. This type of fork requires only more miners to enforce new rules, as opposed to a hard fork that requires updating all nodes and agreeing to a new version. A soft fork doesn’t cause the creation of new cryptocurrency.

Transactions performed using cryptocurrencies require confirmation – the so-called consensus, i.e., consent of network users. On Blockchain, Proof-of-Work algorithm is used to confirm transactions and create new blocks in a chain. Thanks to Proof-of-Work miners compete to complete transactions on the network and get a reward. It requires that the participant’s node prove that the work done and sent by them qualifies them to receive the right to add new transactions to the blockchain. However, the entire Bitcoin mining mechanism requires high energy consumption and long processing time.

Proof-of-Work is used by many popular cryptocurrencies, including Bitcoin and Litecoin.

Proof-of-Stake is one of the consensus mechanisms, used by such cryptocurrencies as Qtum, Waves, and Wanchain.

Privacy coins provide the functionality of hiding identity when making transactions. They may also keep the anonymity of the wallet and hide the balance of the transaction.

To understand this concept, let’s take Bitcoin as an example. It is a most well-known cryptocurrency, and in fact, it guarantees the only pseudoanonymity. The important point is that Bitcoin transactions are linked to the address of the recipient and the sender.

There are cryptocurrencies, which are characterized by a higher IT security. The examples of privacy coins are Dash, Monero and ZCash. Privacy coins also do not provide full anonymity, but in this context they are a better alternative than Bitcoin.

For instance, Dash – one of the cryptocurrencies which will be soon listed on our exchange – uses Proof-of-Work consensus mechanism (like Bitcoin), however in fact, some of Dash’s solutions are similar to Proof-of-Stake and therefore, this project combines these two algorithms.

Some interesting solutions in Dash are called Private Send and Instant Send.  Private Send is the possibility of sending cryptocurrency units within a private transfer. After selecting this option, the data for a specific transaction is mixed with similar information about payment orders of other network users. The described solution obviously makes it difficult to identify the user of the Dash network. What’s more, there is an option of a very fast transfer (Instant Send), which at the expense of a higher fee allows you to send funds in a few seconds.

Uff… not everything is easy to understand, right? If you are a cryptocurrencies newbie, don’t worry. For sure, with time, everything will become more and more clear to you. We wish you a successful adventure with cryptocurrencies and blockchain technology!