Chainlink Crypto – what characterizes it? 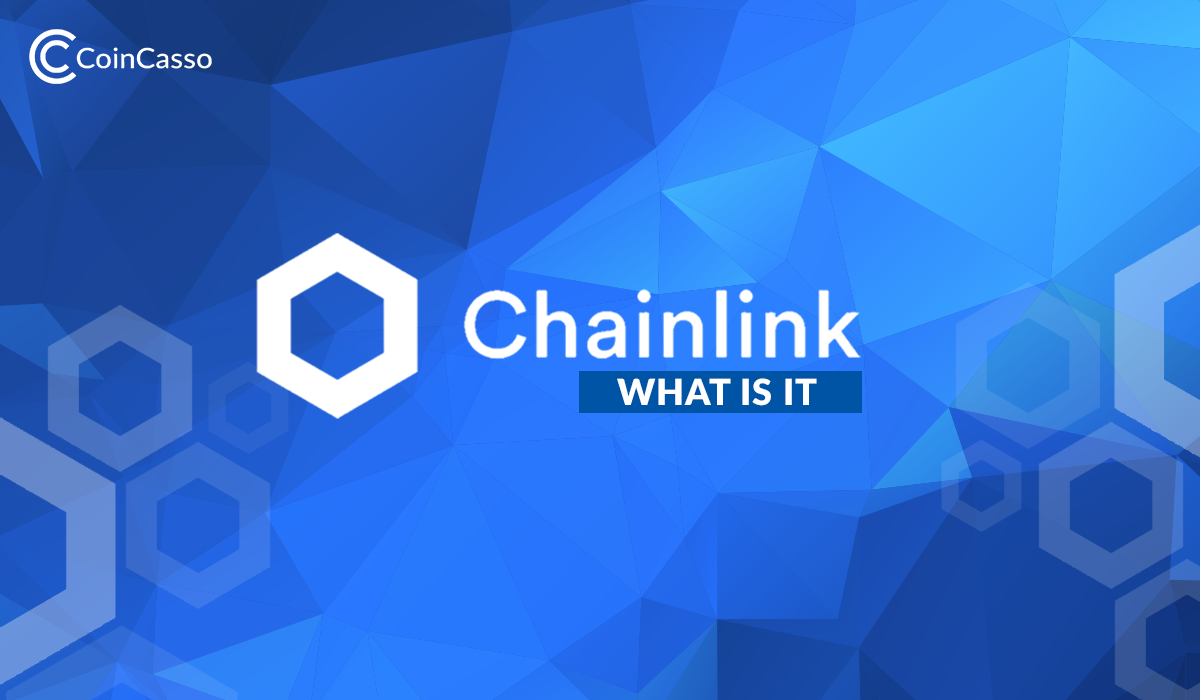 There are few most-known cryptocurrencies like Bitcoin or Ethereum. But, there are also some digital assets (tokens) that you should know about. One of them is Chainlink. It is connected with blockchain ETH and it supports its operation with external data. In this article, I’m going to teach you some facts about the Chainlink token. If you are looking for a relatively new cryptocurrency, with a low price you should read this article.

Chainlink is a decentralized oracle system that aims to connect smart contracts with the real world. It was created in the summer of 2017, two years after the first edition of Ethereum.

Chainlink is a system, which is helping to repair the weaknesses of functions that require data external to the blockchain. It provides a secure and easy connection between real-world and blockchain, by creating an oracle network.

Chainlink, also known as a LINK token after creation cost around 20 cents. Now the Chainlink price on the market is about $4,5 for one link token. Its price has never been more than $5. Its capitalization is $1,5 billion, so it is worth paying attention to this token. 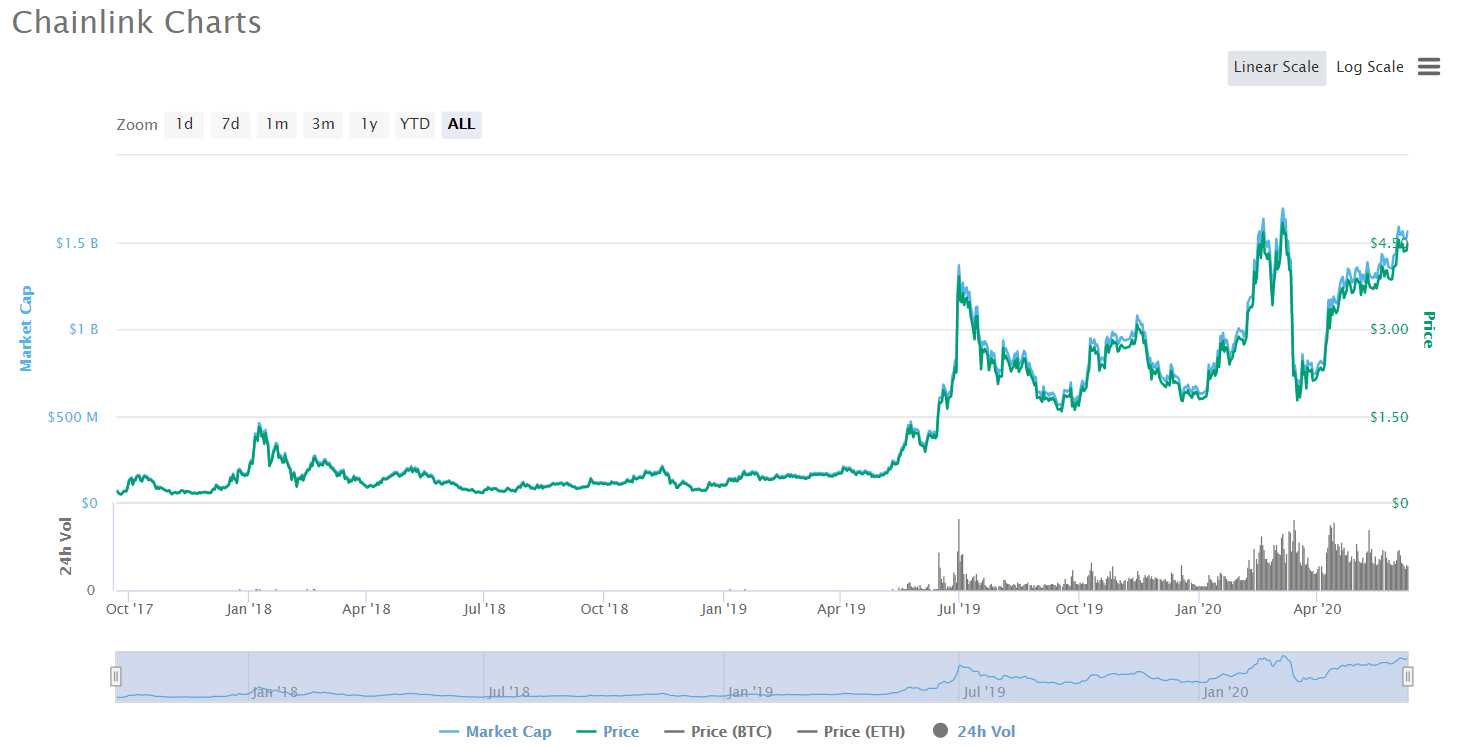 Chainlink crypto (LINK) was developed by Sergey Nazarov. Nazarov main focus was on solving the smart contract connectivity problem. He is a 32-year-old son of Russian immigrants who moved to New York in the ’90s. From an early age, he learned how to use a computer. Both of his parents were engineers, and they knew how important is it. In middle school, he read programming manuals and played many real-time strategic video games. He studied philosophy and management at New York University but he knew by then that he wanted to become an entrepreneur.

In 2010, he was assistant professor Lawrence Lenihan of NYU, (the founder of Firstmark Capital’s early-stage investment firm), and then worked for six months at Firstmark on technical analysis of technology startups. Chainlink CEO is also known as the man in plaid. He was wearing a plain shirt in almost every interview.

He came up with the idea of creating a team that can deal with a connectivity problem. He started a SmartContract.com company. The CEO of this company is Nazarov, it’s CTO is Steve Ellis, and Mark Oblad is a Head of Operations.

LINK traces its origins back to September 2014, when SmartContract.com company was founded. Team’s main task was to create a bridge between public blockchain and real-world data. They developed a product called Chainlink. However, the original solution realized on centralized oracles, create an oracle problem.

What is the oracle problem?

An oracle is a provider of data. It can be data sources, APIs, etc. Smart Contracts are as “smart” as the info that feeds into them. Without them, they are just instructions of code. If someone feeds bad data or malicious code, the contract will process bad information as it is, giving an incorrect outcome. This is an oracle problem. Nazarov’s team continue working on this problem, and in 2017 SmartContract.com solved it, by creating Chainlink, as we know today. A decentralized blockchain bridge between the data sources and smart contracts.

It held an ICO in September 2017. Eight years after the creation of first cryptocurrency – Bitcoin. Token sale ended 19 September 2017. It reaches $32 000 000, which was 100% of the planned amount. This success has allowed the project to develop. SmartContract team has introduced Chainlink (LINK), which allows smart contracts to connect to data feeds from any web API in a secure way.

An oracle system to help smart-contracts

If you are interested in cryptocurrencies, you probably heard about Smart Contracts before. They enable secure transactions running on the ETH platform in blockchain technology. 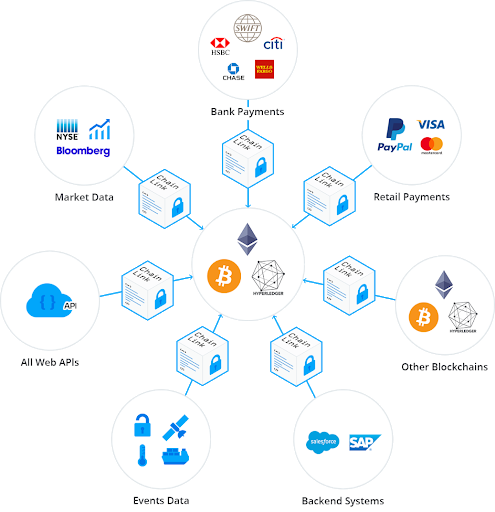 There are more and more new types of applications hosted on blockchain Ethereum. You are probably hearing news about new solutions based on blockchain, on the market. They are decentralized, open to all and they are running 24 hours a day. They can also hold and transfer value in the form of cryptocurrencies or tokens. But, when it comes to connecting with external data the are some weaknesses of blockchain. Therefore, a new solution to the market was needed.

Chainlink’s idea is to create a decentralized, resistant to manipulation oracle system, which is available round the clock and safe. It needs to be as safe as a cryptocurrency. It may involve multiple external information. Furthermore, any application, who needs it, will be able to use it.

Is Chainlink token a good investment?

What is the difference between coin and token?

Words “coin” and “token” are often used as synonyms, but they are two completely different concepts. Coins (like Bitcoin and other Altcoins) are digital money, while tokens are digital assets. They can be used as a method of payment inside the project’s ecosystem. It gives a holder right to participate in the network. A good example of how tokens work is cinema tickets. You can’t pay the bill with them, but you can use them in the cinema to watch a movie. You need to remember, that Chainlink is a token, not a coin.

Chainlink is still a new cryptocurrency, so many people wonder if it is worth to buy this token. LINK close 2019 with a profit of +529%. Its market cap is more than $1,5 billion. This cryptocurrency rapidly burst into the top crypto exchanges. Its current 24h volume is about $293 000 000. The forecast for Chainlink’s price is highly optimistic. Link is also supposed to be a great long-term investment.

According to the news, more and more companies join cooperation with Chainlink. Like SWIFT, the largest international banking communications system is going to use Chainlink’s PoC (Proof-of-concept) system. That may be a huge step for all cryptocurrencies. Watching their twitter we can very often see other companies that start cooperation with LINK.

LINK offers various useful features. It gives its users connectivity by integrating various networks with smart contracts. An ability to send payments from smart contracts to bank accounts and popularly used payments networks in a completely safe way. You do not have to worry about the security of your crypto and money when you use a Chainlink. Knowing the crypto market and buying LINK at the right time is a good way to have an additional earning.

What are the advantages of using Link?

How do I get chainlink?

Chainlink, like other cryptocurrencies, can be bought on the exchange, that supports the digital currency. To receive your first chain-link token for fiat you need to have an account on the crypto trading platform. It will require your email address, login, and password. Then, you should complete the verification process, and after that, you can start buying, selling, or trading it, to earn some money. Remember to use only a trusted platform to buy it.

The current Chainlink price is relatively low (comparing to Bitcoin, or other popular crypto on the market), and its market cap it’s is in the top 15 of all the cryptocurrencies. It is worth to pay attention to LINK token. In the future, Chainlink may be one of the most important players in the crypto market. Additionally, if Ethereum will gain in value, the link will also become more important.