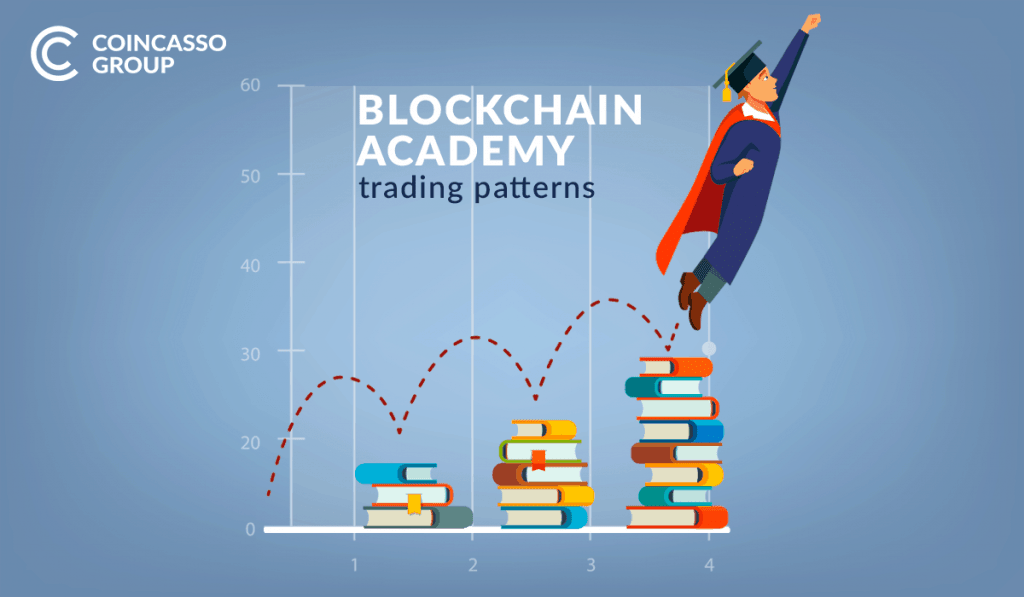 In the last article from the Blockchain Academy series, we discussed the basic indicators of technical analysis – we explained what the moving average and the MACD indicator are. In this episode, we will introduce you to continuation formations of trends.

So, what exactly are continuation formations? They are geometric layouts on graphs that show us a temporary break in the trend before the next consistent move. These include flags, wedges, and triangles. It is very important that such formations show not only the direction of price change but also its potential range. Some of these formations may also in some cases indicate a reversal of the trend, but in this article we will focus on examples illustrating the continuity.

At the beginning, the course picks up the line of resistance at its highest point, and then the trend begins to stop and the course amplitude begins to decrease. To be sure that such a figure has occurred it is worth to find a few confirmation points in the form of a graph’s contact with the resistance line and the support line. Then when you see that the chart will break the resistance line, this is what we call an entry point and it’s a good moment for investment (purchase). The situation in the case of a downward trend looks analogically as shown on the right. 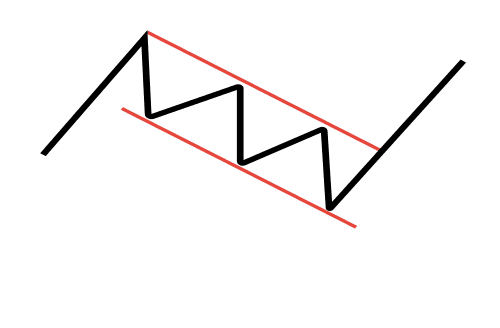 Along with the symmetrical triangles, the flags are very much appreciated by investors, because they are very certain formations – with high probability their occurrence signals the continuation of the trend. The flags resemble a parallelogram with a line of resistance and support directed in the opposite direction to the trend. They form in the short-term period. We have similar elements here, as in symmetrical triangles: exit and entry points from the formation, the final part of the trend before formation and the continuation of the trend after leaving the formation. Below is the XBT / USD chart with yellow marked price movement: 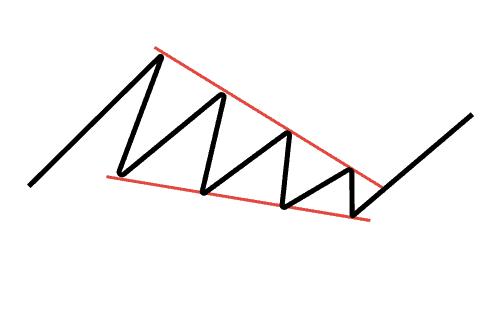 The wedge is another formation of the continuation of the trend, but it can also be a formation portending the reversal of the trend. See the picture above. We are dealing here with an upward trend. The upper red line indicates the level of resistance, and the lower red line – the level of support. In the wedge, the lines forming the upper and lower constraints of the formation approach each other, are directed in the same direction (e.g. downwards, as in the figure) and are not parallel. When we are dealing with an upward trend, both lines increase, otherwise both lines fall. Price movements in the wedge are once again smaller to rebound up or down. Wedges are characterized by the fact that they form for a much longer time than flags – even for several months. Wedges are often confused by novice traders with flags.

Triangles are a very common formation, however difficult to analyze. There are many types of triangles, the most popular ones are the ascending, descending and symmetrical triangle. We will briefly discuss each of these types.

In the diagram, it looks like this (on the left an ascending triangle, on the right it is descending). 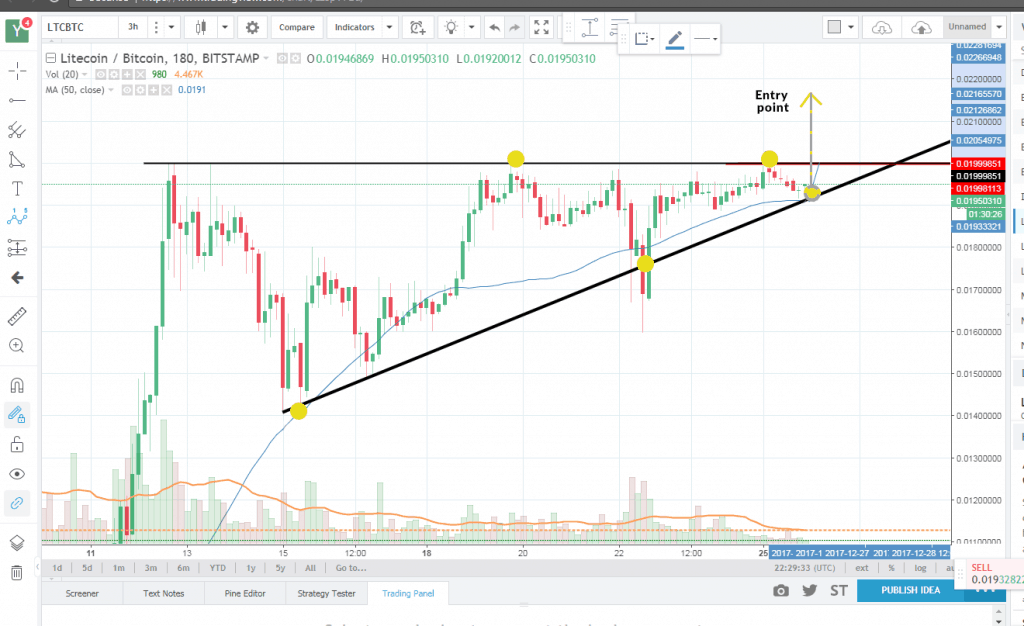 Look at the picture. The upper line is called the resistance line, and the bottom line is the support line. The amplitude of fluctuations inside the triangle decreases. It is believed that after the formation of such a triangle, in most cases the price goes up (exceeding the upper limit, i.e. the resistance line), therefore above the triangle there is a good entry point in which you can open the position. 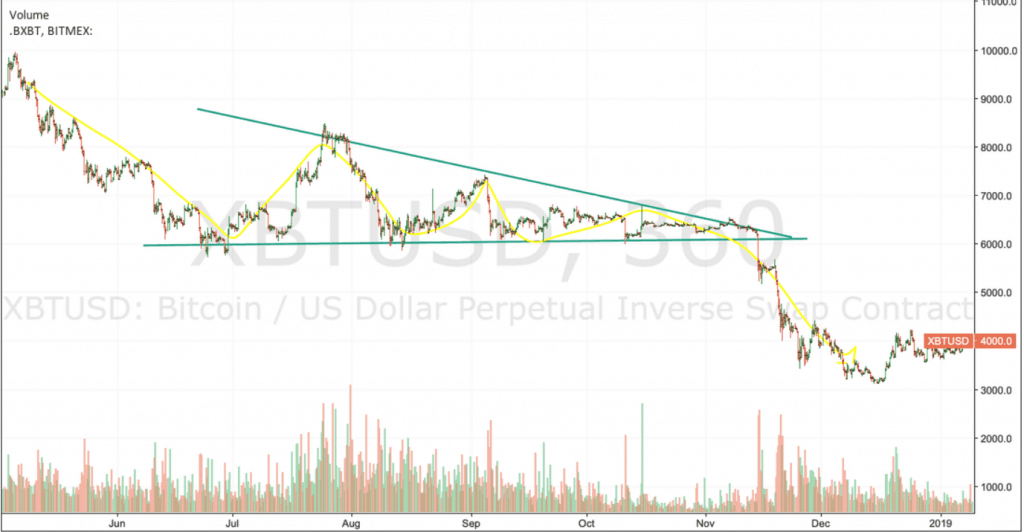 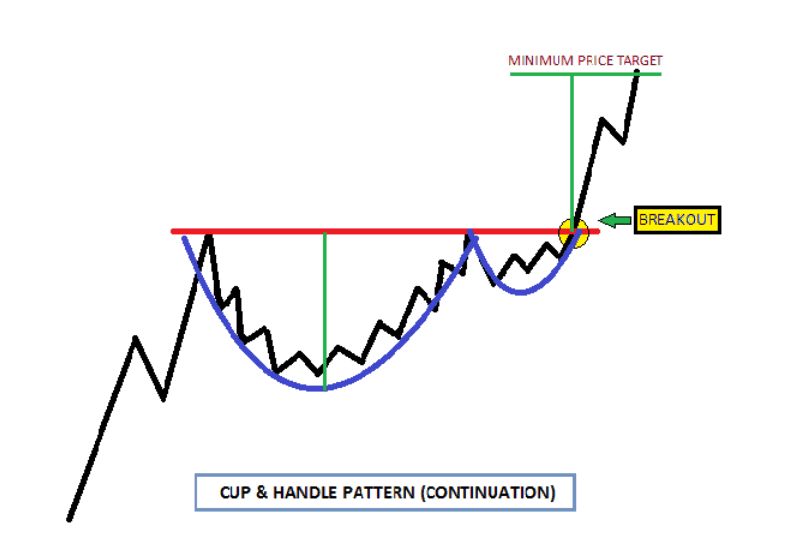 This figure usually indicates an upward trend. It is characterized by the fact that the first part of the formation has the shape of the letter “U”, where it returns to the local maximum, and then another, much smaller “U” called here the handle. The chart shows the current situation on the XBT / USD market.

There are many other figures, but here we have presented the most basic ones. Stay with us and wait for the next episode of Blockchain Academy!