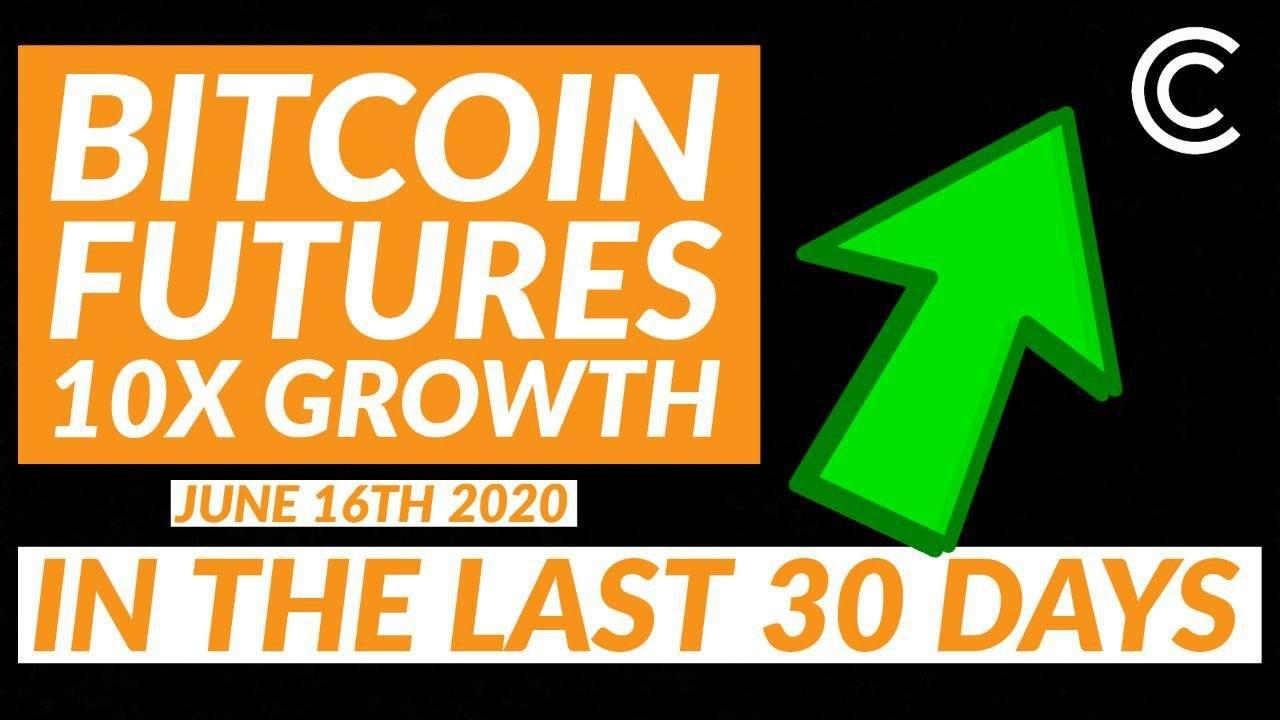 In today’s article we discuss why Bitcoin went down and then went back up. We also talked about the Bitcoin options Market growing 10x over the last month, and how the whales caused Bitcoin to go to $8,900. We also run over the current top cryptocurrency prices as well as a brief analysis on bitcoin. This show is designed to give you all the relevant information. You need every single day in the Cryptocurrency space so sit back relax and enjoy the show.

As always this publication is sponsored by CoinCasso cryptocurrency exchange. So if you’re unsatisfied with your crypto currency exchange, like Coinbase that crashes every single time that the price drops or goes up, consider checking out CoinCasso in the link for a $35 sign up bonus.

I have the daily chart pulled up since the bottom of March 12th when the coronavirus pandemic outbreak crash and we’ve been on this nice upward climb ever since. 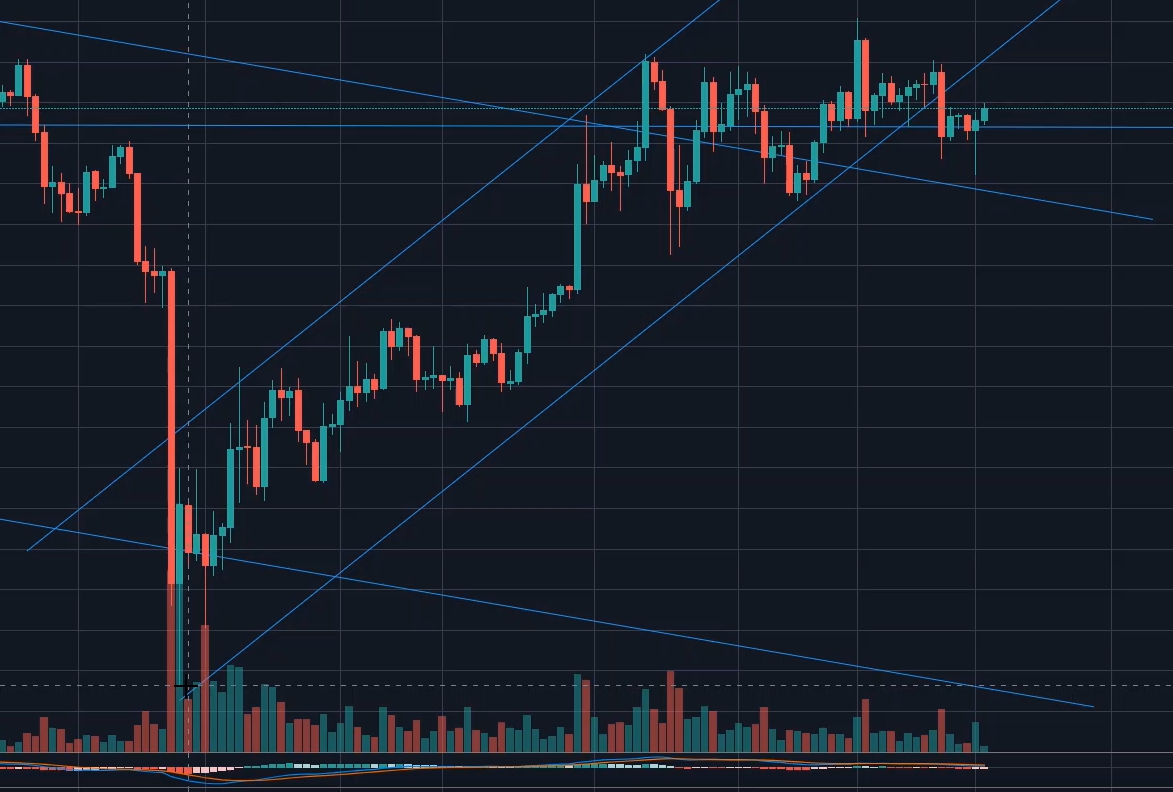 After the stock market saw a big sell off a few days ago. We dropped out of this ascending Channel.

Now we’ve taken it even closer and I want to show you guys this.

This line that I’ve drawn here at $9,300 is very crucial because over the last year it’s been the most consistent price of Bitcoin. It’s used this Level as support and resistance over 25 times over the last year and as you can see we’re playing nicely in this range.

Now, I’ve taken an even closer to the four-hour chart and this is the big stock market drop that we saw and Bitcoin followed suit by dropping down a lot down to just above 9,000 dollars. 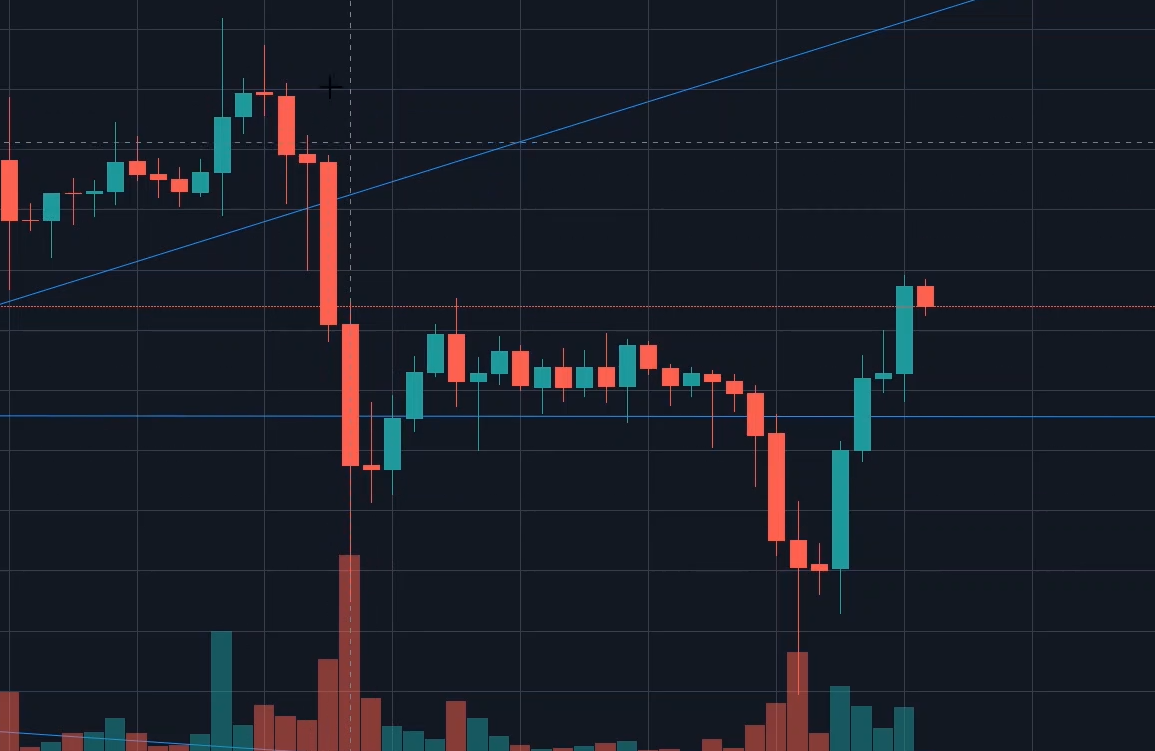 It immediately recouped 50% of its losses, but then traded sideways for about two days. And as far as I saw in the news this latest drop-off here was due to whales selling off and taking their profits. However, Bitcoin below the nine thousand dollar range has a lot of new buyers, people either like to get in the game below 9,000 or they like to dilute the price of their current Bitcoins by buying in lower.

Which subsequently caused the price to spike back up and is now playing at about that $9,500 range.

Personally I do not like to see these big drops and big spikes in price because they’re not very consistent. If we saw a nice steady climb up then I’d be more confident in the fact that Bitcoin is going to maintain its trajectory, but with spikes up like this, we are likely to see the subsequent drop back down. 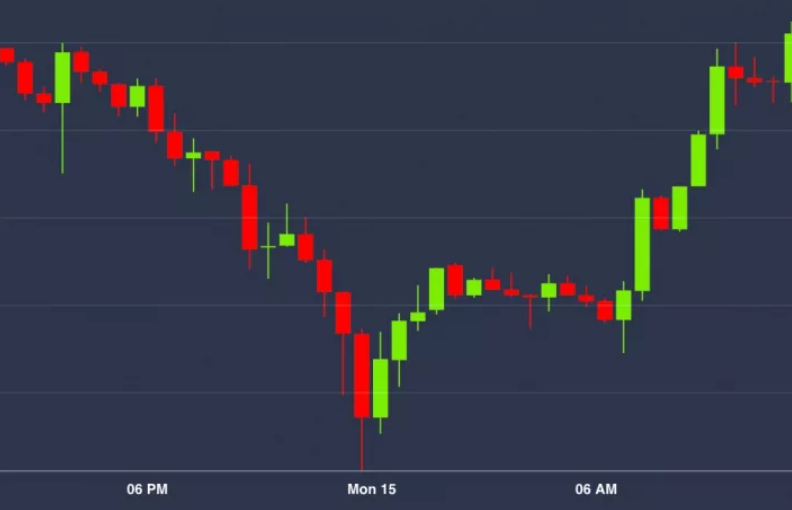 Bitcoin took a hit Monday, only to recover as many market participants see price weakness ahead.

“Bitcoin is trading off with other asset classes, having suffered a loss of short-term momentum,” said Katie Stockton, lead analyst for Fairlead Strategies. “There is room to short-term oversold territory, but no support has been broken. The neutral consolidation phase is intact, in my work, as long as bitcoin is above the 200-day moving average, about $8,340, and below resistance near $10,055.”

Traders say traditional markets seem to be taking the lead these days. “Our actual concern at the moment is the correlation between equities and gold,” Singapore-based quantitative trading firm QCP Capital wrote in an investor note Monday. “If both start trading lower in tandem, which happened prior to Black Thursday in March and also before the Thursday sell-off last week, it could be a strong signal for BTC to trade a leg lower as well.”
Indeed, both bitcoin and the S&P 500 saw similar movements on June 10’s drop across most markets. Gold has held its own throughout the year, with the exception of March’s decline.

I just realized that this article is no longer relevant because a bunch of whales bought Bitcoin below $9,000 causing the price again to decouple from the stock market so their predictions and Analysis are complete hogwash.

It blows my mind to see the same technical indicators used for such a volatile asset as Bitcoin, that they use in the stock markets to predict the price in the future. Because unlike the stock market. Somebody could actually sit down on an exchange, buy 200 Bitcoins, and the price could shoot up 7% one day. Then the rest of the normal people that have Bitcoins see a huge price increase and sell-off as well causing the price to drop down.

That’s where the cryptocurrency gambling comes into play. In the Futures and options Market. Which brings us into our second article.

CME Bitcoin Options Market Grew 10x in the Past Month 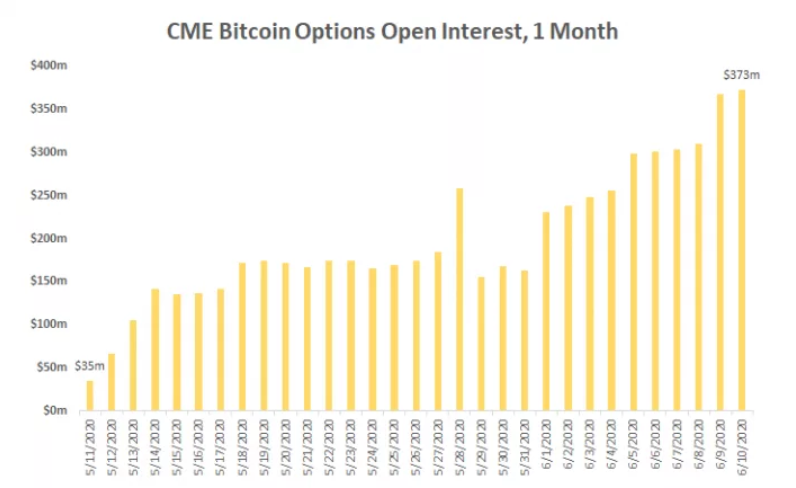 Over a recent 30-day period, the total open interest for CME bitcoin options increased more than tenfold, from $35 million on May 11 to $373 million on June 10. Moreover, open interest made a new all-time high on six consecutive days from June 5-10.

Growth in CME’s bitcoin options market is “a strong signal that regulated institutions are exposing their books to bitcoin,” said Matt Kaye, managing partner at Los Angeles-based Blockhead Capital. “CME has a higher cost of capital and is closed on weekends, so anyone trading there is likely making those sacrifices because they have to.”

Much of CME’s growth appears to have come at the expense of Deribit. Market shares claimed by competing bitcoin derivatives markets LedgerX, Bakkt and OKEx have remained largely unchanged since January.

Now, we’ve discussed this over the past few weeks. How the Paul Tudor Jones hedge fund has allocated anywhere from one to two percent of their total portfolio into Bitcoin Futures. Now most people misunderstood this move and they thought that they were actually investing in Bitcoin for the long but what they’re actually doing is gambling on the future price of Bitcoin.

Whether they’re shorting it or going long. Meaning they’re expecting the prices to go up or down. 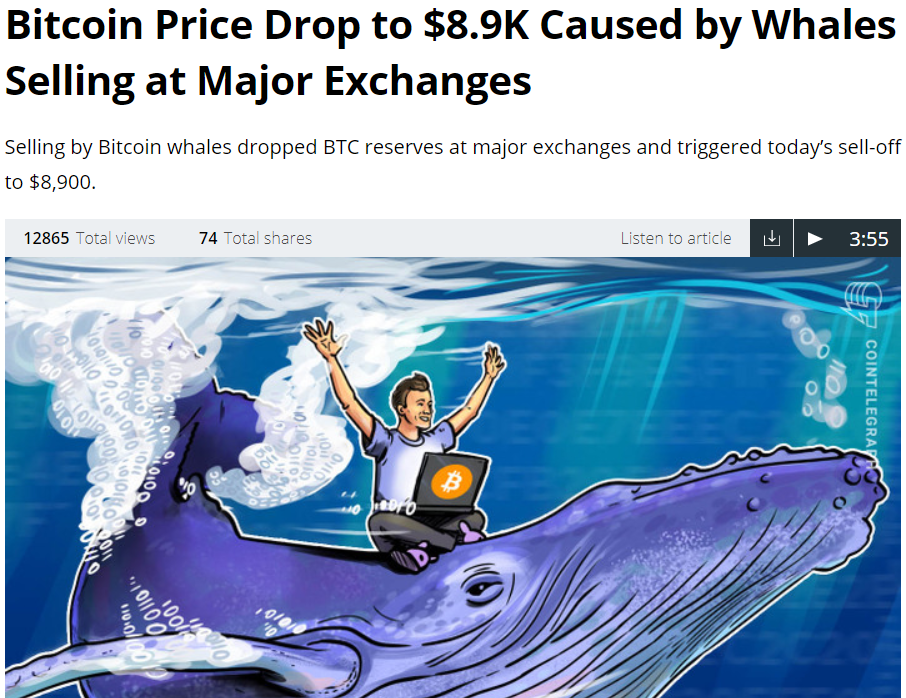 As the weekly open commenced Bitcoin price dropped below $9,000 in a rapid pullback, liquidating $30 million in longs on BitMEX alone. According to market data, part of the sell off was the movement of crypto whales closing positions which led to panic selling among retail investors.

Whales—individual investors that hold an immense amount of Bitcoin—have the ability to significantly impact the price of BTC and according to on-chain data provider CryptoQuant, the recent selling is indicative of the start of a bear trend within the market.

Ki Young Ju, CEO of CryptoQuant, said:
“The BTC reserve at Gemini hit a year-high a few days ago, and then it started to decrease. This could be a local buying opportunity in the short-term, but in the macro-view, the reserve trend seems to go downward.”

Why are whales selling?

There are three reasons whales feel the need to take profit at the current price level. One is that Bitcoin price rejected violently at $10,500 violently twice in the last 11 months. The others are that the mining difficulty of mining is expected to see its biggest increase since January 2018 and spot trading volume is declining.
For whales that hold large amounts of Bitcoin, liquidity is key. If there are not enough buyers in the market and one large whale begins to sell, it can trigger a cascade of sell order and liquidations.

When the volume of the spot market stagnates and futures market activity increases, for whales, it triggers concerns of a rapid correction in the near-term.

For instance, on March 13, the price of Bitcoin dropped by 50% overnight below $4,000 because whales started to sell high up. It then led to a sharp sell-off which ended with $1 billion in futures contracts being liquidated in what is now the steepest single-day pullback in Bitcoin history.

Whales are seemingly taking profits after a massive 130% rally over the last three months. By doing this they are able to safeguard their holdings and can also hedge against relatively low volume in the cryptocurrency market.

As with previous sell-offs, major investors are also probably considering the current geopolitical risks and volatility in the global stock market as external variables that may affect the momentum of the cryptocurrency market.

How amazing would it be to own like 200 Bitcoins? This is currently how people make money in cryptocurrencies. They wait for the price to go up, they sell and then it drops back down and then they buy in at a price that they feel comfortable with. It spikes back up over the next few days. They sell off again, and that’s the turmoil that we are in right now.

Like I mentioned before, these whales have a huge impact on the price of Bitcoin. When we do see a huge price fluctuation like that. That’s when you look at the Futures Market, either people are going long or shorting Bitcoin, and those positions get liquidated when it breaks outside of that price range.

Seeing a huge Liquidations in the Futures Market also affects the price just as much as Wales do. This is why Bitcoin has so much volatility and why it’s very risky to get in and out of the market at the wrong time.