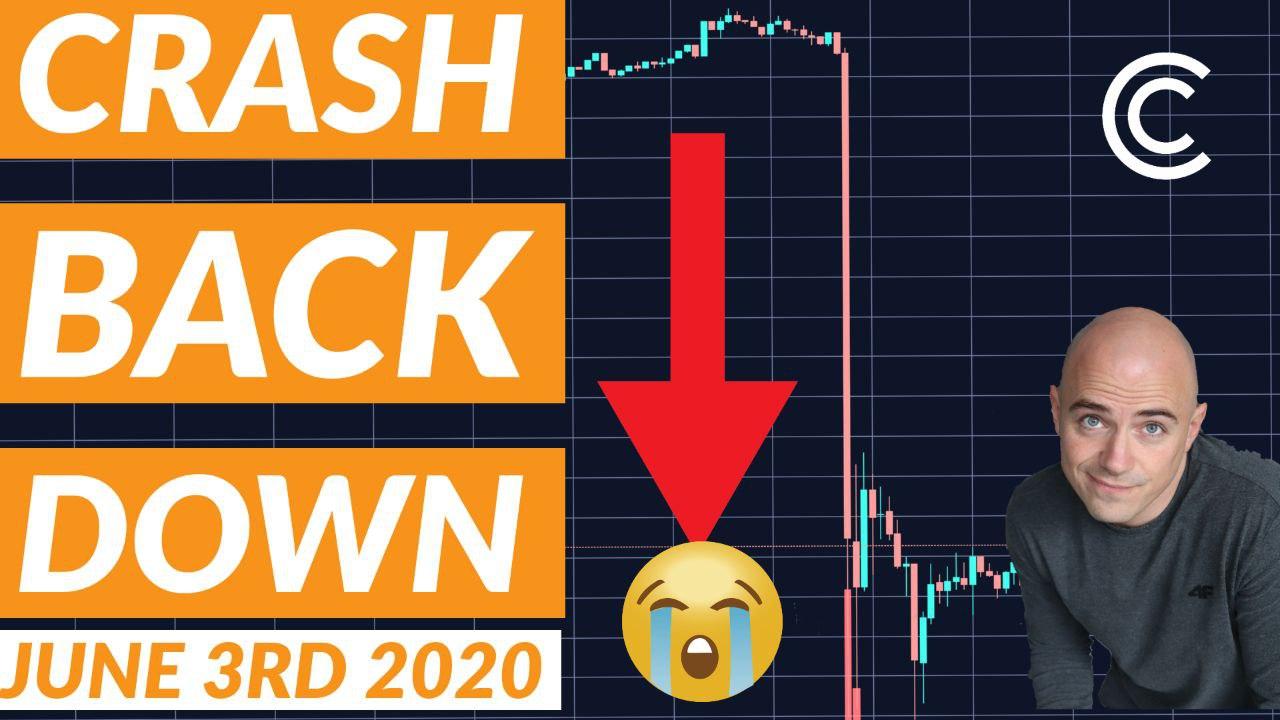 Basically everything across the board tanked at the exact same time.

Let’s jump into tradingview and check out Bitcoin and see exactly what it did in the last day, and look at the trend lines to see where it’s going in the future.

Now, we’re looking at a 5 minute chart here. So you can see that this one huge Candlestick happened within a five minute time frame. It did immediately bounce back up recovering about 25% of its loss and has been Trading Sideways at about that $9,500 Mark ever since.

Now I know this type of fluctuation is concerning for a lot of people because they see the market shoot up and then sell off like crazy causing people to lose a lot of money. Thus is the volatility of cryptocurrencies.

Now, let’s take it out to the one-day chart and see exactly what these trend lines are doing, focusing on yesterday’s video showing you these key resistance and support levels. 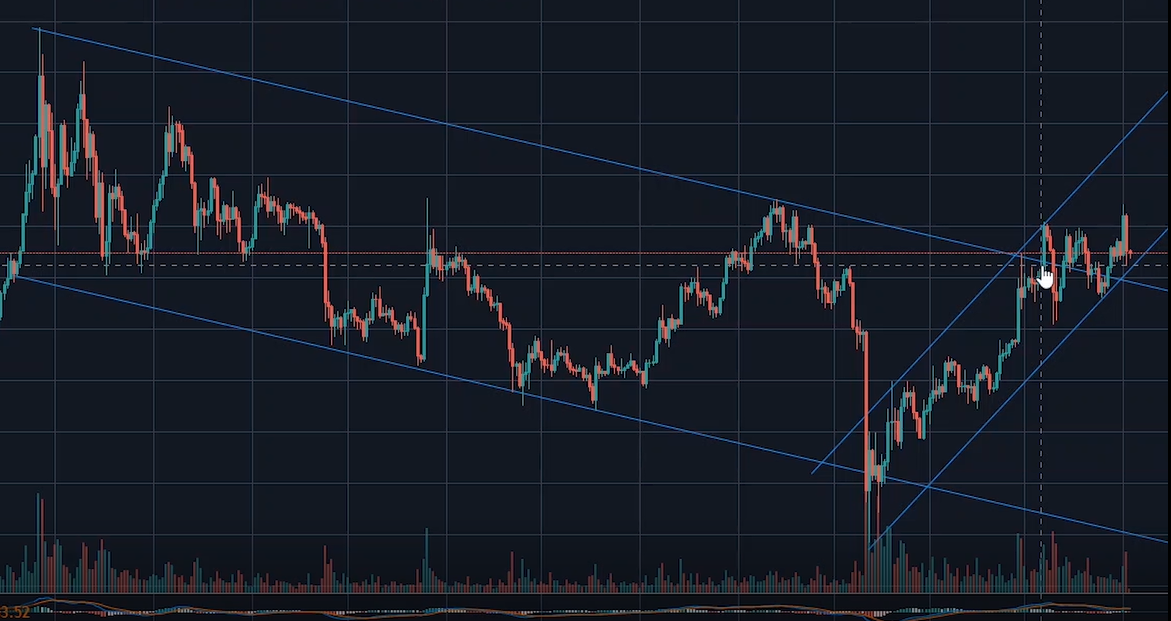 Okay. So if you remember from yesterday’s video I talked about About this huge downwards Trend that we’ve been having and recently we broke out of that at around May 6th, which indicated a new bullish Trend as you can see here. 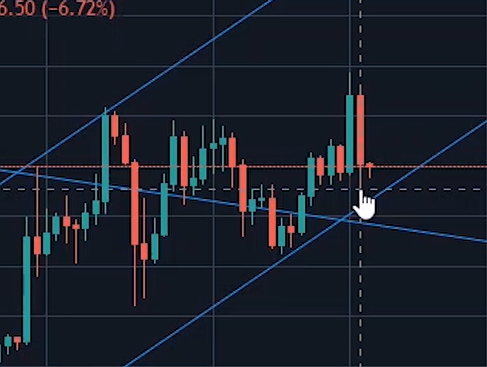 We hit the bottom and are on our way up. Now, if you look closely this green candle stick was yesterday’s surge up to $10,400 then subsequently dropping back down to $9,200 but keep in mind this is exactly what I said yesterday as long as we don’t break out of this ascending Channel, we won’t be using this line as a key resistance level.

You can see here 34.7 billion dollars worth of bitcoin was traded in the last 24 hours.

So Bitcoin is still within a reasonable range of its upwards Trend but it is playing with that bottom lower level. Fingers crossed, and we keep going up and we break and hold that $10,000 threshold for quite some time because that is a big psychological level in the market and I think within the next few weeks, months and years these prices right now will be laughable.

Now, let’s jump into two quick news articles to see what’s going around in the industry.

Traders ‘Whack the Beehive’ as Bitcoin Surges Then Plunges 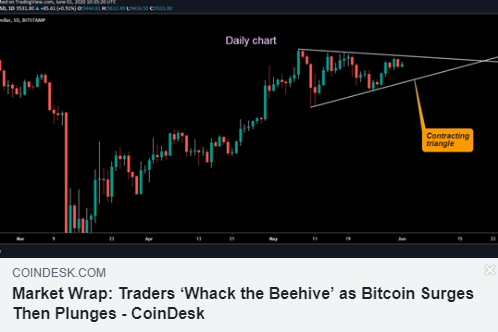 Tuesday’s bitcoin price whipsaw can be partially explained by large traders looking to deleverage in the derivatives market.

So we have confirmation from yesterday’s video. It was not the riots. It was not Donald Trump announcing that he’s going to mobilize the military to take care of the riots. It was big buyers getting into the market and then the drop off I think was because of the derivatives Market where we saw a liquidation of over a $130 Million worth of positions going short.

US Offers $5M Bounty for Arrest of Venezuela’s Crypto Chief 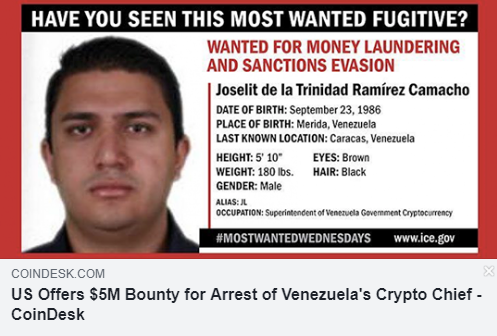 The head of Venezuela’s cryptocurrency initiative, the petro, is wanted by the U.S government on charges of corruption and links to the narcotics trade.

Immigration and Customs Enforcement (ICE) added Joselit Ramirez Camacho to its Most Wanted List on Monday, accusing him of a number of violations related to international commerce and his alleged involvement in the international drug trafficking scene.

Ramirez Camacho is a public official and serves as the superintendent for Venezuela’s petro initiative, a cryptocurrency supposedly backed by the country’s oil and mineral reserves.

The superintendent is wanted by ICE’s Homeland Security Investigations (HSI) arm for violating the International Emergency Economic Powers Act and the Kingpin Act, and for breaking a series of sanctions imposed by the Treasury Department.

ICE is offering up to $5 million for any information that leads to his arrest and conviction.

Ramirez Camacho is accused of having deep political, social and economic ties to multiple alleged narcotics kingpins, including Tareck EI Aissami, a former vice president of Venezuela who is also wanted by ICE on charges of money laundering and an alleged role in international narcotics trafficking.

This is exactly why we need cryptocurrencies. We put so much faith and trust into our government and we expect them to take care of everything. But when corruption is embedded so deep in the government, lying to their population, and making the economy collapse entirely, causing hyperinflation to the point where the country can’t function. This is just appalling to me.

Now I’m not saying that a global cryptocurrency, a currency used by every single country across the entire world, would be a good idea. But for countries that see this developing, they see the trend of government corruption and hyperinflation happening. What they can do is trade their actual currency before it gets hyper-inflated to a cryptocurrency to maintain its value and hold it while they go through the turmoil.