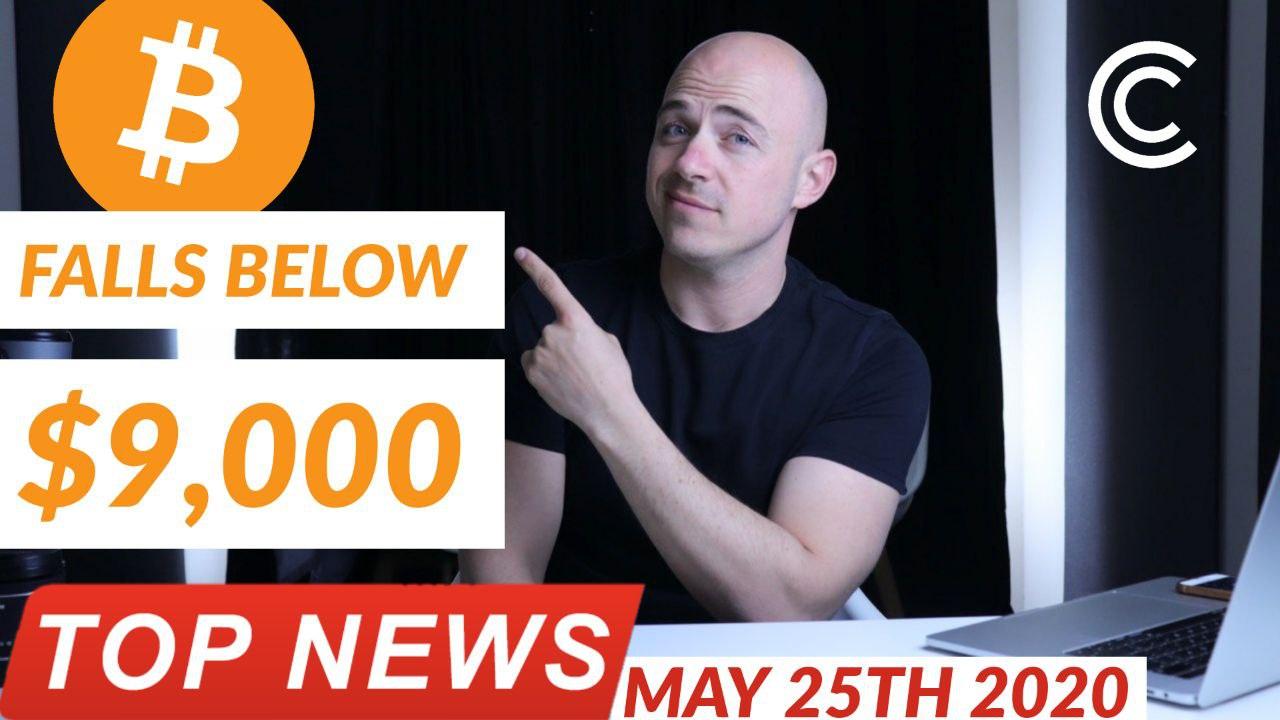 As the weekly close approaches, Bitcoin price dropped out of the ascending channel to $8,840, marking six consecutive lower highs since June 2019. 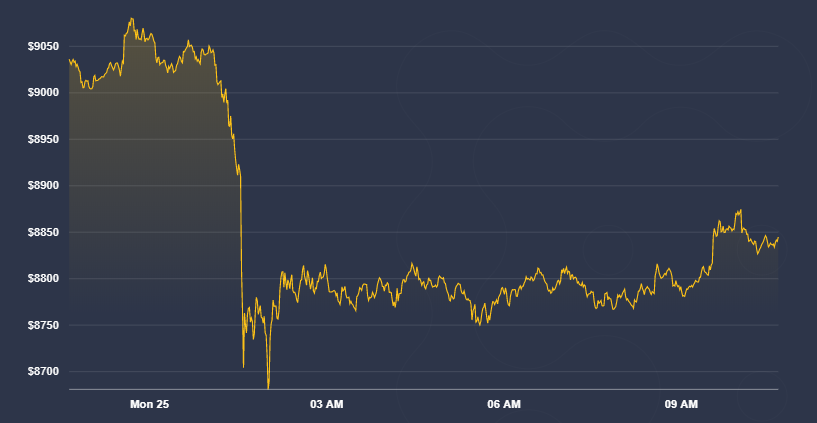 Within the last hour Bitcoin (BTC) price dropped to $8,840. The drop came with less than 8 hours left before the weekly close.

A confluence of miners selling more BTC than they mine, Bitcoin recording 6 consecutive lower highs, and the retest of the $8,800 support leaves BTC vulnerable to a severe pullback.

In technical analysis, lower highs indicate that buyers are failing to establish a new bull cycle. Every time a lower peak is reached, it shows the selling pressure in the market is simply too strong to break out of it.

The price of Bitcoin rebounded at $8,840, testing the $8,800 support area for the second time within four days. Typically, the digital asset tends to break down below a heavy level of support in the third or fourth touch. This means, BTC is likely to see a clean breach of $8,800 upon the weekly close.

Almost immediately after dropping close to $8,800, the price of Bitcoin rebounded to around $8,900, showing BTC is set for a short-term price spike following the weekly open on May 25.

But, data from TradingLite shared by cryptocurrency trader Hsaka shows a significant amount of sell orders on OKEx in the $9,300 to $9,400 range.

When I was doing my analysis last week, I was discussing the $9,200 range and if we maintain an upwards trajectory, we should see a nice bull run out of it. But if we fell below it, we should tank to about that $7,500. So for those of you that invested in the $9,000 range, we’re going to have to wait a few weeks before it even gets back to that point. If it ever does. As for right now, definitely do not panic sell because then you’re going to capture those losses. Instead it’s best to wait out the storm.

The latest implementation of bitcoin (BTC) on the Ethereum blockchain quietly went live this week.

There are 1.24 renBTC live on the Ethereum mainnet now, according to Etherscan. Three sources with knowledge of the project have confirmed this is the Ren smart contract, live ahead of its launch announcement.

Kain Warwick of Synthetix tweeted Wednesday that he was the first person to hold a full bitcoin in renBTC.

However, there’s no way yet for members of the public to mint additional renBTC, the CEO of the company behind the project told CoinDesk in an email.

“While the smart contracts have been deployed on Ethereum, RenVM itself is not actually on mainnet. This is because RenVM is a distinct network separate to Ethereum. The final mainnet subzero version of RenVM won’t be deployed until later,” Taiyang Zhang wrote. “The minted renBTC so far has been from our own internal testing [and] Kain from Synthetix testing the system. The public hasn’t been able to mint renBTC thus far.”

RenBTC becomes the latest in a rash of products built to expose bitcoin-backed assets to the benefits of Ethereum’s various decentralized finance (DeFi) platforms.

The RenVM is a way to hold a cryptocurrency in a multi-signature wallet controlled by nodes in the RenVM and mint a representation of that asset as an ERC-20 token for use on Ethereum. Unlike other projects, RenVM is bringing more than bitcoin to Ethereum, with other assets to follow.

To sum this up, Ren BTC is like Bitcoin on the ethereum network. So it would be like US Dollars and tether. I heard about this recently and I’m really curious to see if this is actually gonna pan out because in my opinion, the ethereum network is far superior to the Bitcoin Network. That’s why I’ve been moving some of my assets from Bitcoin to ethereum because with etherium 2.0 coming out predicted at the end of July, we should see a nice upswing in the price.

Bitcoin price needs to secure a weekly close above $9,300 to avoid dropping below the ascending channel to revisit lows below $8,800. 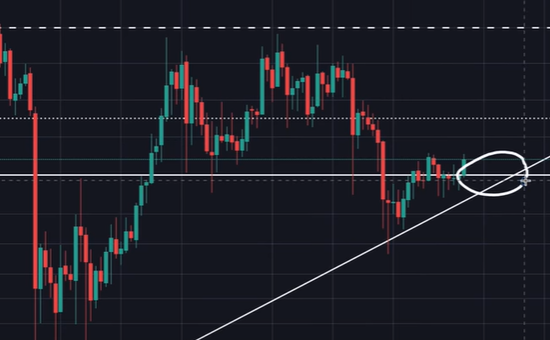 As the weekly close approaches Bitcoin (BTC) price made a quick move toward $9,300 after spending the past 48-hours struggling to hold above $9,200. Traders would like to see the top-ranked asset on CoinMarketCap close above the $9,300 level and earlier this week Cointelegraph contributor filbfilb cautioned that:
If Bitcoin is unable to reclaim the levels aforementioned, the likely inevitable breakdown would be to retest the May lows and 20-week MA, currently around $8,160. Typically this is the line in the sand between continuation higher and a more meaningful bearish downturn.

As mentioned in a previous analysis, Bitcoin price continues to bounce off the ascending channel trendline but sustaining above the 20-day moving remains a challenge. On the 4-hour chart we can see the Bollinger Bands tightening and within the last hour the price pushed above the 20-MA on a low volume move.

The upper Bollinger Band is currently located at $9,449, just a few dollars away from $9,500 which has served as an important support and resistance zone. Currently the RSI is rising toward 50 and the MACD has pulled above the signal line.

The Chaikin Money Flow oscillator has also surged above 0 but what remains to be seen is sustained purchasing volume to support the current move toward $9,300.
I know a lot of you guys are freaking out like oh my God, what do I do? I bought Bitcoin at $9,500 and I’m down $1,000. Should I sell should I hold on. Basically what we’re seeing here is quite a large correction. We were down at $3,800 and we’ve been on a crazy bull run ever since so it’s expected to see a small correction.

This is why it’s very stressful for people that day trade Bitcoin. They see these huge price fluctuations as opposed to checking Bitcoin once a week to see how it’s doing, making sure your positions are good, making sure it didn’t drop to 4,000, because if it did, you buy back in you dilute the price that you bought it at before.

Overall you need to think about the long-term. If people are already comparing Bitcoin to an asset like gold, you know that it’s going to be worth something in the future. You may not see the returns now or even in the next six months, but if you hold on to it for four or five, maybe six years, you should see a massive massive gain, and then you won’t even worry about these small little dips of a few hundred dollars. My opinion personally, I would wait a little bit more because if we do fall below that point we should see that $7,500 range come in and at that point, I’m definitely a buyer.