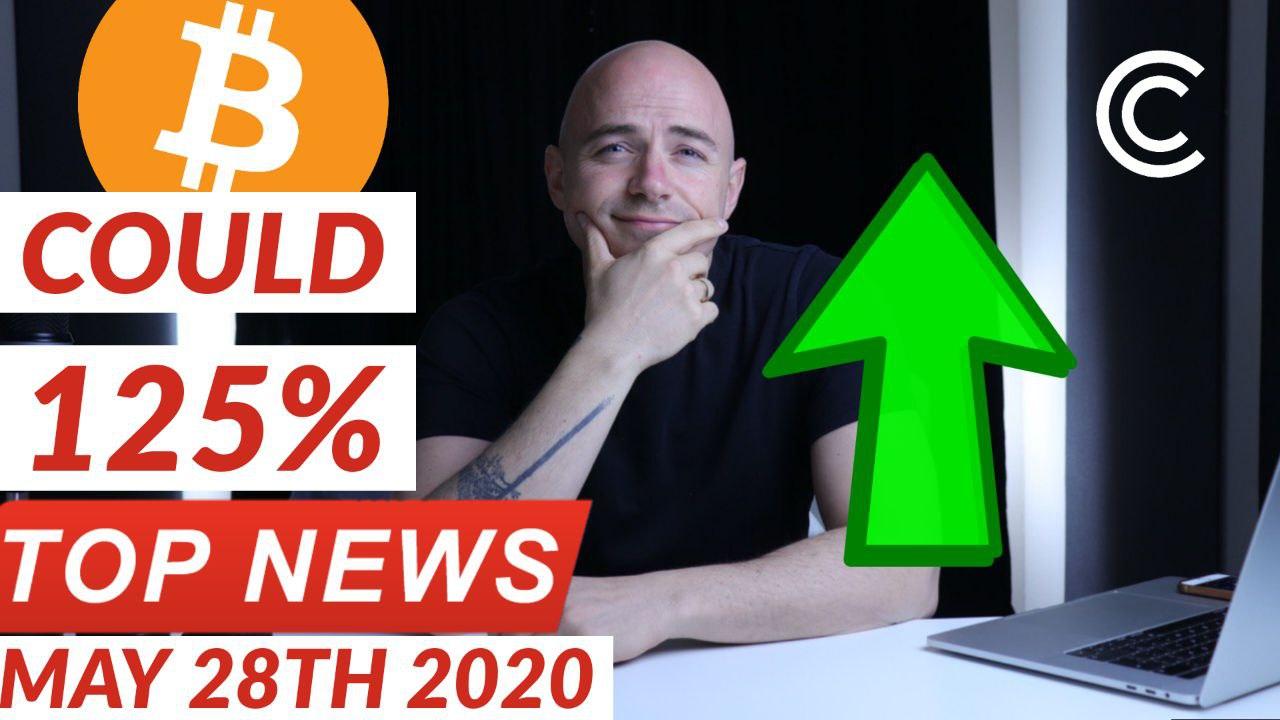 The price of bitcoin (BTC) shot above $9,100 Wednesday in high-volume buying at around 10:00 UTC (6 a.m. ET) thanks to traders feeling optimistic about the crypto markets. 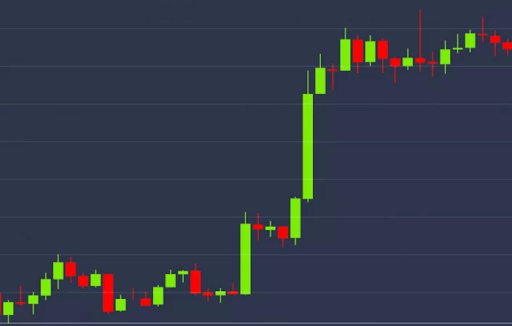 The question for the market is whether bitcoin’s price can continue to rise after Tuesday’s struggle to stay at $9,000. Traders like to talk about the $10,000 level as some kind of barrier to blow through that will result in new highs, but bitcoin hasn’t been able to push past that number since hitting it for a short time on May 7.

“Bulls seem unable to break the $10,000 psychological support for some time since the halving,” said Peter Chen, a cryptocurrency trader at Hong Kong-based OneBitQuant.

Meanwhile, the bitcoin options market has an event coming up this week, Singapore-based trading firm QCP Capital wrote in a recent market update. “Keep an eye out this Friday as over 40,000 BTC worth of options will be expiring,” the firm noted.

You need to look at consumer behavior and how confident people are in the market as well as the Futures markets because if you see Bitcoin going up to that $10,000 mark and you look at the Futures market, and there’s a ton of sell orders at 10,000, you know, once it hits that point, it’s just going to drop back down.

After facing a heavy load of transactions earlier this month, bitcoin’s (BTC) network has returned to a more normal level, recent developments suggest.
The total amount of fees paid to miners was 80 BTC as of Tuesday, down from its 11-month high of 201 BTC on May 21, according to the data provided by the blockchain intelligence firm Glassnode. It was at 57 BTC on May 3. 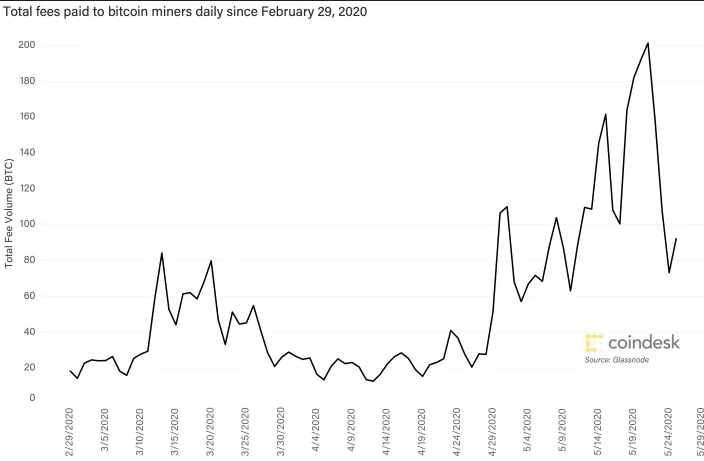 The percentage of miner revenue from fees has also pulled back to 9.4% from the 28-month high of 21% registered on May 20.

“The fall back in transaction fees are related to a normalized transaction activity and recent mining difficulty adjustment, which occurs around every two weeks,” said Wayne Chen, CEO of Interlapse Technologies and founder of virtual currency platform Coincurve.

Users pay fees to miners for processing transactions on the blockchain. Miners also receive a fixed amount of BTC per block mined. That number halves every four years, most recently on May 11 of this year.

Transaction fees are determined by the state of the network (how congested it is) and the size of the transaction.

Bitcoin’s block size is 1 MB, which means miners can process only 1 MB worth of transactions per block mined roughly every 10 minutes. If the number of transactions exceeds 1 MB, the network gets congested and miners prioritize transactions with higher fees.

Network congestion, as represented by bitcoin’s memory pool or its collection of unconfirmed transactions on the blockchain, has been on a declining trend since topping out at the 28-month high of 267,608 on May 18 with a total block size of 78.5 MB, as per data source Bitcoin Visuals. As a result, transaction fees have come off highs seen on May 21.

The memory pool exploded at the end of April and remained congested for a few days after halving as the programmed supply cut revved up investor interest, leading to an increase in the number of transactions. “This forced users to increase their mining fee, so they can jump ahead in line to have their transactions confirmed quicker,” said Chen.

This is gonna happen from time to time because a lot of new people are getting into Bitcoin causing more transactions and more volume to happen. And because Bitcoin is actually limited to one megabyte blocks a lot of these transactions take a much longer time to actually process. Which is why Bitcoin cash was created, the fork from the Bitcoin Network, allowing for much larger blocks and much more transactions to be processed within each block. Plus a lot of miners went out of business after the halving because they were no longer profitable. So there’s less miners on the network and more transactions happening. Very interesting time for Bitcoin mining.

Bitcoin traders should keep an eye on the ongoing slide in the yuan, analysts say.

That’s because, historically, the cryptocurrency looks to have put in a positive performance during bouts of weakness in the Chinese currency.

The yuan (CNY) fell to 7.1613 per U.S. dollar earlier on Tuesday to hit the lowest level since early September and taking its cumulative month-to-date and year-to-date losses to 1.4% and 2.85%, respectively.

The decline to eight-month lows could be associated with concerns about the U.S. response to China’s proposed security law for Hong Kong and the resulting haven demand for the greenback. U.S. Sen. Marco Rubio (R-Fla.) put out a tweet late Tuesday stating the U.S. would impose sanctions on China if the nation presses forward with implementing the controversial Hong Kong bill.

“If China’s CNY continues to weaken against USD, then we could have a 2015 and 2016 repeat, where BTC strength coincided with yuan weakness,” tweeted Chris Burniske, partner at venture capital firm Placeholder. 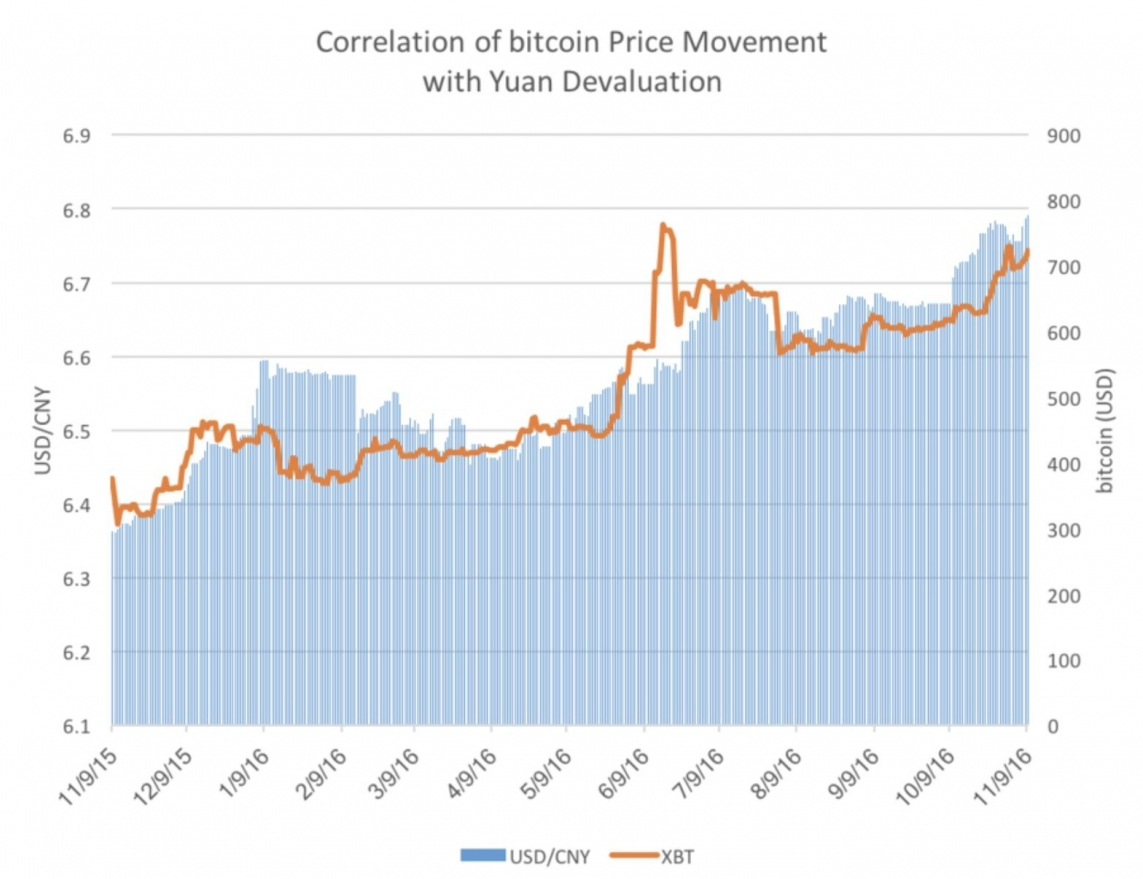 In August 2015, the People’s Bank of China (China’s central bank) surprised markets by devaluing CNY by 3.5%. The Chinese currency ended 2015 with an over 5.5% loss against the dollar, while bitcoin gained 34%.

Another wave of yuan devaluation rocked financial markets in early 2016 and the currency ended that year with a 7% loss. Again, bitcoin rallied by nearly 125%.

Now fiat currency stability in all countries is very important for the people that live in that country. But for me personally, I don’t use the Chinese a Yuan. So if it does get devalued and the price of my Bitcoin shoots to the Moon, I will be very, very excited. And if you guys are looking to get into cryptocurrency, make sure to check out the CoinCasso crypto currency exchange to trade your cryptocurrencies.