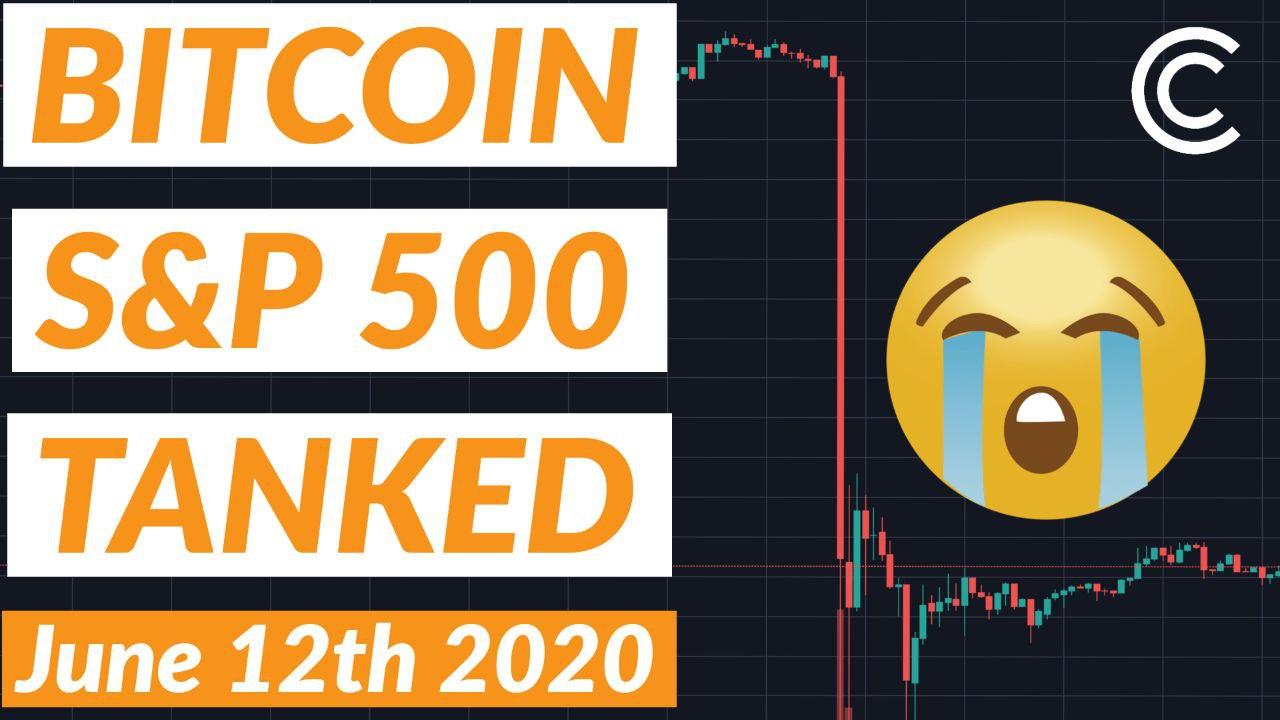 In this article we’re going to talk about how the stock market dropped nearly 6% over the last 24 hours and how it affected Bitcoin. We’re also going to discuss the mutual fund giant Vanguard and how they’re introducing crypto into their portfolio, and the news that everybody’s talking about, the multi-million dollar transaction fee on the ethereum network.

This publication is sponsored by the CoinCasso cryptocurrency exchange. So if you are unsatisfied with your current crypto currency exchange consider checking out the link for $35 sign up bonus.

You can see here the bottom of the upwards Channel and the top of the downward channel here. Let’s take it in even closer and see why and when it broke through this barrier. 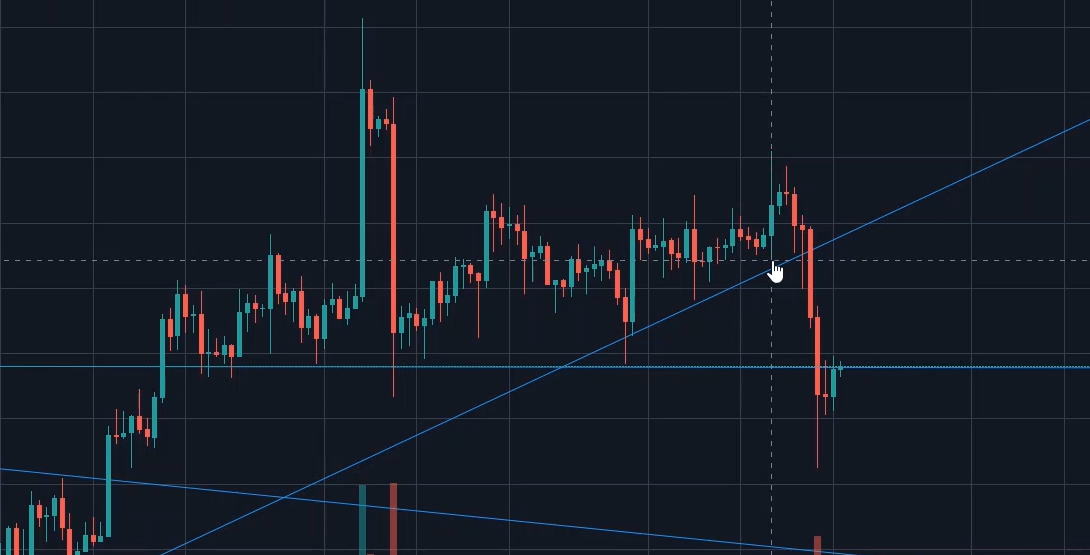 Okay, so when I left you guys yesterday we were still in this upward Channel gaining momentum and then everything took a turn for the worst. We broke out of this ascending Channel and dropped below that resistance point, but it immediately shot back up and that’s where it’s trading at currently.

I’m extremely glad that it didn’t go all the way down to this upper support level of this downwards Trend. So if you’re wondering what happened, why is the price of Bitcoin going down, it’s because the stock market took a dump.

We saw all markets across the board drop anywhere from five to seven percent as you can see right here the S&P 500 was sitting at about three thousand two hundred and twelve dollars on the 10th and currently it’s sitting at $3,000. 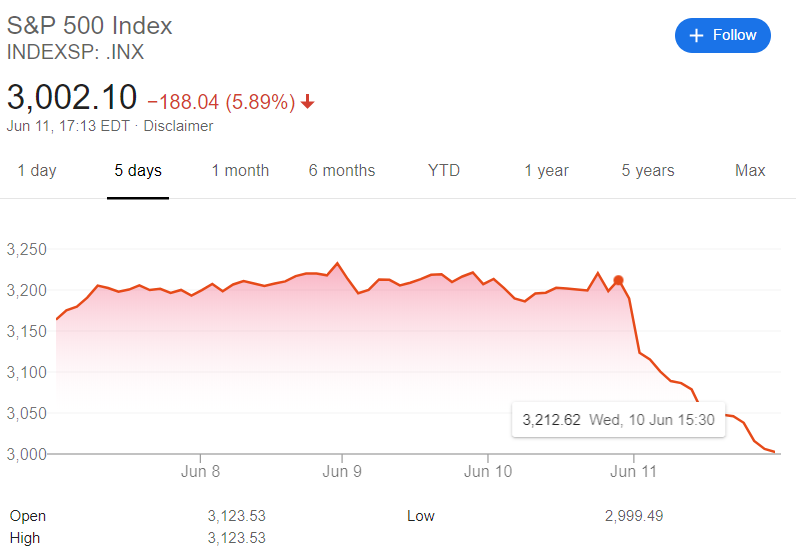 Meaning that in this short time span. It dropped $210, that’s 6.5%, for the global economy to drop six and a half percent in 24 hours, something really bad is happening.

Now if you look at coin market cap, we’re sitting at 30 billion, which means there was a lot of volume in the selling Direction.

Traders are being confronted with a sea of red across almost all assets Thursday. Fed Chair Jerome Powell’s speech on the economy didn’t inspire any optimism about the next few quarters. “The virus and the forceful measures taken to control its spread have induced a sharp decline in economic activity and a surge in job losses,” Powell said in remarks Wednesday.

“You can’t print your way out of this,” said Zachary Reece, managing partner of digital asset firm Lotus Investment Strategies Global. “I fear we are taking the opposite approach and will see the downfall of the United States dollar.”

Now, I’ve discussed this topic weeks ago when I was talking about how the fact that everything is artificially inflating up the market and the economy and All the indicators were showing His recovery since the coronavirus drop, but what most of the global population didn’t take into account was the amount of jobs lost in America alone nearly 10 million people lost their jobs.

So basically 10 million people’s income was taken out of the American economy and yet everything was still going up and now Jerome Powell from the Fed, announcing that he’s less than optimistic about the future of the economy over the next few quarters caused everybody in the markets to say. Okay. This is the top, I’m gonna sell and when the stock market goes down everything gets affected including crypto currencies like Bitcoin.

The cool thing about the market is though when everything drops down that means everything’s on sale. So investors are getting in at lower prices which may cause the prices to go back up and we might see a nice recovery from this quick drop of six to seven percent.

You might be asking yourself who is crazy enough to get in the market after we’ve had a steep decline. Financial professionals and mutual funds as well as financial institutions are always looking for an opportunity to get a lower price. And when you have Deep Pockets, like all of the people that I just mentioned. Their financial contribution can actually boost the market and actually cause it to go up. So let’s jump into the second article because it covers just that.

Vanguard’s end goal for the pilot is to improve the process of securitization with blockchain. The decades-old Wall Street practice of repackaging loans into bonds sold to investors is one that many firms are trying to reimagine with blockchain technology. In March of this year, mortgage equity startup Figure securitized $150 million in home equity loans.

Vanguard and Symbiont have been working together to use blockchain technology in capital markets since December 2017. Vanguard hopes to see faster, more transparent and more automated markets because of the technology.

Management FinTech Strategies Group, said in a press release, adding:
“By digitizing and streamlining the ABS issuance process, we will be able to increase the speed and transparency of transactions while reducing costs and minimizing exposure to risk, which ultimately leads to a more efficient business model for future generations of capital market activity.”

Having a trading platform like this on the blockchain, working globally, means that all transactions whether you live in Asia or America or Australia or Africa. Everything can happen simultaneously and with less resistance.

So currently they are in the pilot program meaning that they are Testing it and working out the bugs, but I’m very very curious to see what’s going to happen in the future with this. I will be following this very very closely over the next few months. So if you want to stay updated just keep watching the videos. I’ll drop this in occasionally.

Slip of the finger? Masochist? It’s not yet known. But over the past two days, an unknown wallet holder has paid some $5.2 million in transaction fees for two ether transactions.

The fee went to Chinese mining group Spark Pool, which processed the transaction and may distribute the millions to its members. A normal transaction fee would likely be up to $0.50 or so, but can be manually set higher by a sender if they want to push a transaction through more quickly.

Around 4:00 UTC Thursday, the same address sent out another 350 ether (ETH) with another 10,668 ETH – worth $2.6 million – in transaction fees. The block was mined by the Ethermine pool.
The identities of both the sender and receiver are not yet known. But the sender has an ETH wallet balance worth more than $11 million – even after spending $2.6 million in transaction fees.

In comparison, the receiver’s wallet is now empty, with past funds transferred out to other wallets.

Strangely, the sender’s wallet has been sending out transactions every minute in recent hours and with attached fees worth less than a dollar. As such, it’s possible the whale accidentally reversed the figures for this odd transaction.

Spark Pool and Ethermine noticed the transactions and actually flaged them as being a mistake. They both publish that this transaction fee can be returned to the original transferer.

Now there’s a lot of speculation on the internet but no one knows for certain. I’m assuming this will unfold as there are many people online that do all the digging of different wallets and see transactions and Trace everything. They’re like the CSI of the crypto world.

So I’m going to do an update on this story coming up on Monday because there’s going to be more information on this, but I’d like to know your opinion. Do you think this was a mistake or a virus or could it be money laundering? Let me know in the comments down below. I hope you guys enjoyed this article. I hope you got some value out of it. Please don’t forget to subscribe to our youtube channel. I hope you have an amazing weekend and we will see you back here on Monday.