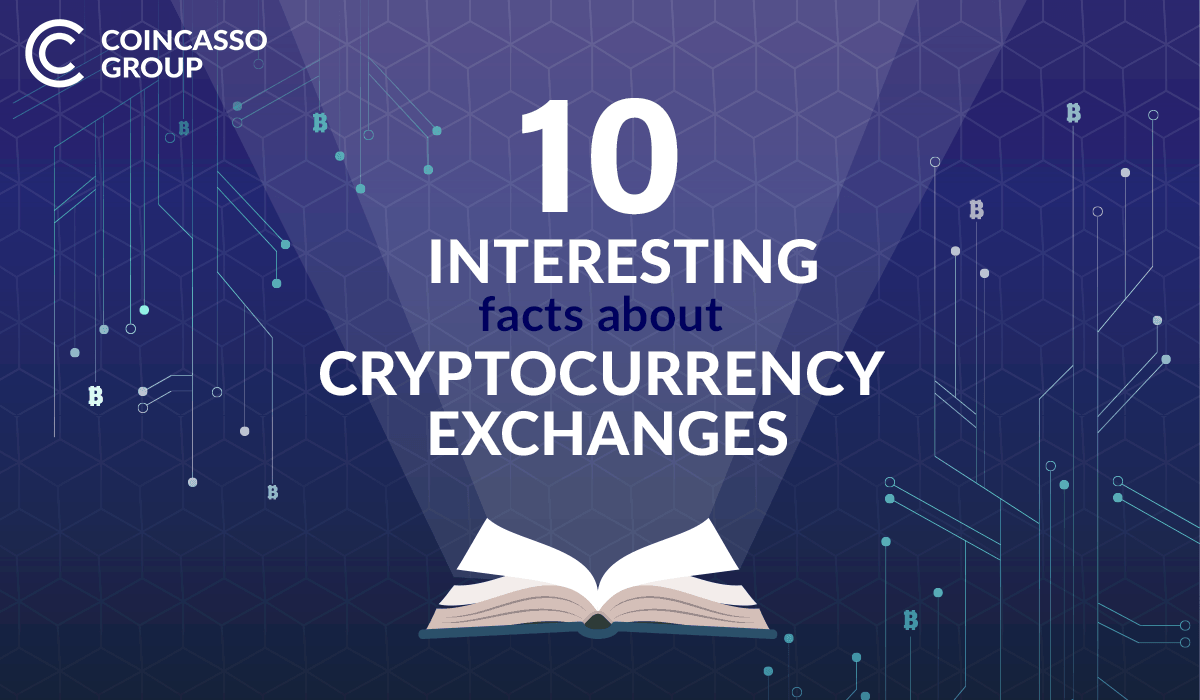 Exchange platforms generate a profit regardless of whether the market and cryptocurrencies are growing or decreasing on value. The profit of the exchange platform depends mainly on the volume of turnover. A cryptocurrency exchange from Top 10 earns about $62M per month on average, from Top 50 – $26M, and from Top 100 – $13M. The average 24-hour volumes are the following: Top 10: $400M, Top 50: $170M and Top 100: $86M.

About 99% of cryptocurrency trade happens on centralized exchanges

There are 255 cryptocurrency exchanges listed on CoinMarketCap

The largest cryptocurrency exchanges today are:

The first Bitcoin exchange is Bitcoinmarket.com

The site was initially announced on the Bitcointalk forum by “dwdollar” on January 15th, 2010. “Hi everyone. I’m in the process of building an exchange,” he wrote. “I have big plans for it, but I still have a lot of work to do. It will be a real market where people will be able to buy and sell Bitcoins with each other.” He continued: I am trying to create a market where Bitcoins are treated as a commodity. People will be able to trade Bitcoins for dollars and speculate on the value. In theory, this will establish a real-time exchange rate so we will all have a clue what the current value of a Bitcoin is, compared to a dollar.” Back then, a single Bitcoin was worth just $0.003!

For almost 20 months until the first exchange platform https://t.co/rG6adaw45d was launched, Bitcoin had no market capitalization. Today, the value is close to 62.45 billion with its being listed on 400 exchange platforms. #TenYearChallenge #Cryptocurrency #Regulation #Legal pic.twitter.com/3aGLZhAl9J

In 2014, Mt. Gox, which stands for… Magic the Gathering Exchange, was the largest Bitcoin exchange on the globe. It handled about 70% of all Bitcoin transactions. There have been stolen about 850,000 bitcoins from that exchange! That money was worth about $450 million at the time. Since this time, about 200,000 BTC was reported to be “found”. The exchange announced bankruptcy and closed its website.

One of the most fascinating characters and icons of the cryptocurrency world is a person called “BearWhale”. On October 6th, 2014, he placed a sell order: 30,000 BTC for $300 per 1 BTC. The Bitcoin price at that time was equal to $350, and people were afraid that this large sell order could move Bitcoin price down to the value from a few years back. “BearWhale”’s coins were bought super quickly and after that, Bitcoin price faced fluctuations for 6 hours to return to “normal” price after this period of time.

The largest cryptocurrency exchange is constantly moving from countries that adopt laws that make their activity illegal. Binance, was initially located in China. In 2018, China blocked the operation of foreign trading platforms, so Binance moved to Japan, where it also encountered legal problems. After leaving Japan, the exchange was accepted by the government of Malta, who even… greeted them on Twitter!

The exchange used cryptocurrencies to “wash” dollars! BTC-e, the main European cryptocurrency exchange was accused of laundering billions of USD. Its operator, Alexander Vinnik, is also accused of participating and benefiting from some Mt. Gox hacks.

Be aware of a blacklist

Merchants and exchanges can not accept your coins if your last block is “contaminated” by certain transactions, usually involving terrorism or illegal activity, even if you did not know that the person you traded with had a blacklisted wallet before. Monero is an altcoin which was created to omit this issue. Monero’s blockchain, unlike most others, is completely anonymous, making it impossible to check the address activity. Monero is the most widely accepted cryptocurrency in the “deep web” stores.

The Binance president on the richest characters podium

The richest crypto billionaires list in the world includes Chris Larsen, co-founder of Ripple, which has many digital assets worth between $7.5 billion and $8 billion. The second is Joseph Lubin with 1 – 5 billion dollars, and the third is the president of the Binance Exchange with 1.1 – 2 billion dollars.

That’s it! Which information is the most surprising to you? Tell us in comments! Expect also more information about cryptocurrency exchanges and CoinCasso Exchange 2.0 on our blog and social media soon. Stay with us!